The third day of our walk was to be the longest leg. The stage from Wooler to Fenwick was 13 miles but as we were staying at the Lindisfarne Inn we had a couple of extra miles to walk along a minor road. It was a bright and sunny when we set out and it stayed like that for the rest of the day. The best weather we had during our walk.

Wooler is a small, pleasant town in the Northumberland National Park. It’s isolated position means that it isn’t swarming with tourists and it’s a little old fashioned, which isn’t a bad thing. Facilities are rather behind the times, though, and it’s a bit short of quality places to eat.

We bought ourselves supplies from one of the local bakeries that sold freshly made sandwiches and pies, and from the Co-op and set out on our way. The guidebook promised us that there were no steep climbs during this stage. Well, that wasn’t quite true as after leaving the outskirts of the town we had a steep climb up to a ridge that overlooked the town and the surrounding countryside

It was worth it. The views on this bright sunny day were outstanding.

At the end of the ridge we descended down to Weetwood crossing the old bridge over the River Till.

We then had a trek along several miles of minor roads and gravel farm tracks through pleasant rural countryside. 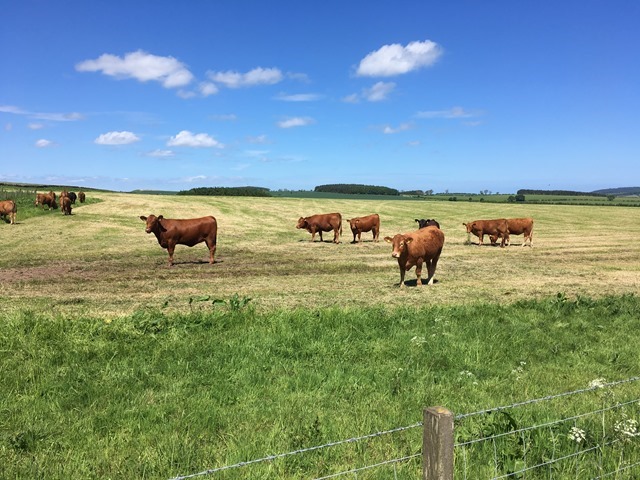 Walking on tarmac on a warm, sunny day with minimal shade made it a little hard going at times. But the scenery was beautiful.

At one point we came across a WWII pillbox by the side of the road. It was part of the defences built when Britain was threatened by invasion in 1940.

After 3 or 4 miles of road walking we came across St Cuthbert standing by the road! 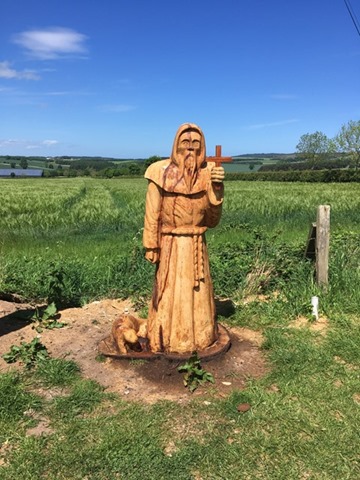 There was a group of walkers taking a break and as it was about 1 o’clock by now it seemed like a good idea to do the same and eat our dinner. I took a group photo of ‘the Platoon’ by the statue and they returned the favour.

We’d started to come across groups of walkers since the second day. In most cases when they were overtaking us! Often we’d have a brief chat, exchange pleasantries and and swap stories. We’d then often bump into them again later during the walk, sometimes several times. That was the case with ‘the Platoon’ as we came across them a few times during the next couple of days.

Moving on, we had another stretch on a minor road,

When the Vikings invaded Lindisfarne, the monks took St Cuthbert’s body in his coffin and took it on a journey across Northumbria.

once they’d spotted those dreaded dragonships crashing up and down on the roaring mists and foaming spray. They gathered up their most precious belongings and, taking the advice of their hallowed saint, the Community of St Cuthbert left their holy island for what was destined to be a seven-year journey that helped shape England and keep alight the flames of Christianity that were in imminent danger of being extinguished. (source)

This cave was allegedly one of the places they stopped

We stopped a while to talk to take a look at the cave and chatted with some other walkers who were taking a rest. This included ‘the Platoon’ (another group photo taken) and a trio of real pilgrims from Chester University.

There were some interesting ‘cave paintings’ painted on the roof of the cave.

from where we could see right down to the sea and our final objective, Holy Island.

The path then took us north through woodland for about 2 1/2 miles, finally descending into the village of Fenwick, which is just off the A1.This was the end of the stage in the guidebook, but not for us. We had now to head to the Lindisfarne Inn where we had rooms booked for the night. We avoided the busy main road by taking a quiet, narrow minor road which came out on to the A1 more or less opposite the Inn. We were tired by now and didn’t particularly enjoy this last couple of miles on tarmac not helped by my blood sugar dropping. We were glad to check in, get our boots off and take a welcome shower and a rest before eating.