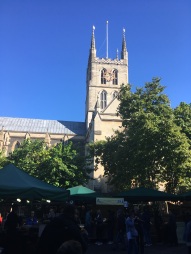 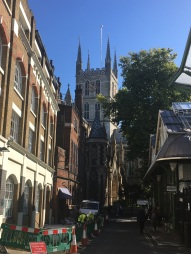 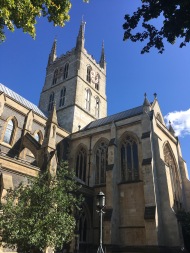 Southwark Cathedral stands on the south bank of the Thames, near London Bridge and I’ve walked past many times when I’ve been in London both for work and pleasure. After wandering around Borough market we decided to go and have a closer look.

There’s been a church on the site since Norman times, if not earlier. Between 1106 and 1538 it was the church of an Augustinian priory. Following the dissolution of the monasteries, it became a parish church. It only became a cathedral in 1905 when the diocese of Southwark was established.

This is an old drawing of the church  and the nearby old London Bridge from 1616 (source: Wikipedia) 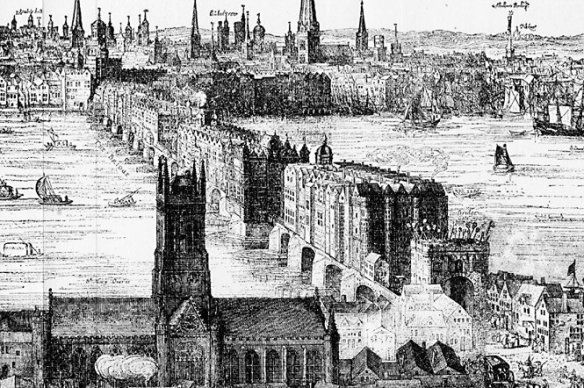 The famous panorama of London in 1647 by the Czech artist Wenceslas Hollar was drawn from the top of the tower of the church, then known as Saint Saviour’s.

The present building is mainly Victorian Gothic following the reconstruction of the building, which was in a bad state of repair, in the 19th Century, although there are some remnants of the older structures, particularly in the retro-choir.

Looking down the Nave 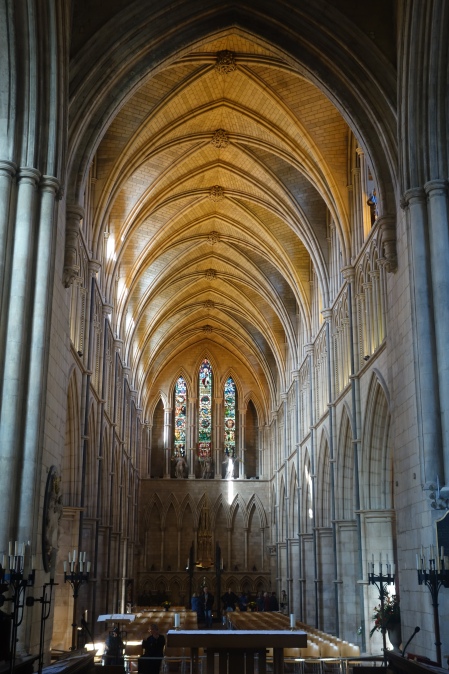 The high alter screen. The original was installed in 1520 but the two rows of statues are in excellent condition and were only added in 1905. 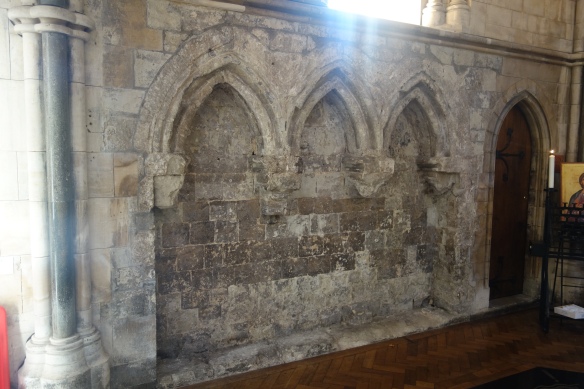 Originally the building had a timber roof, but that was replaced during the Victorian restoration. However, a reproduction has been created in the crossing, underneath the tower 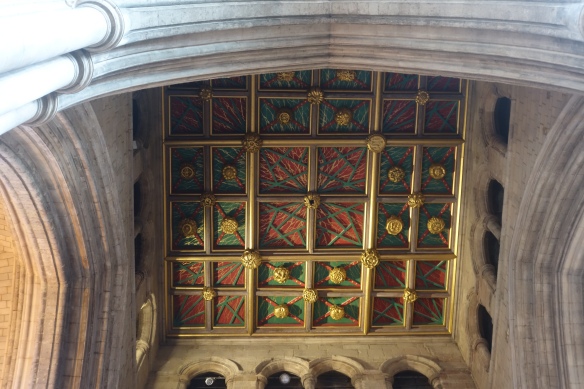 The original roof would have been held together by several hundred carved bosses. Some of the originals have been preserved and are displayed at the far end of the nave. Here’s some of them. 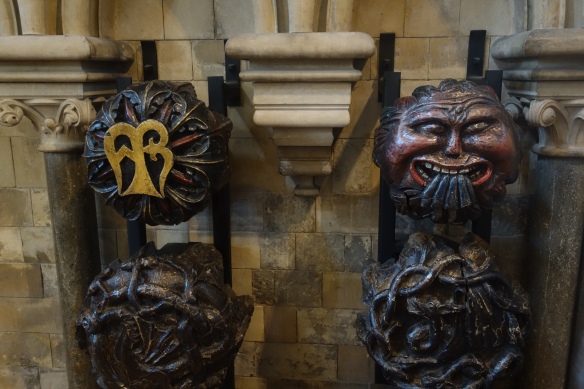 During Elizabethan times, the Bankside area, south of the Thames, where the church is located, was outside the jurisdiction of the City of London, and became something of a “pleasure garden”  occupied by the bear baiting pits and theatres including the Globe, Rose and Swan. The reconstructed Globe is a short walk away. So, not surprisingly, the cathedral ahs a close connection with the historic dramatists. William Shakespeare’s brother, Edmund, was buried there in 1607. His grave is unmarked, but there’s a commemorative stone in the paving of the choir.

There is a large stained glass window dedicated to William Shakespeare, depicting scenes from his plays, at the base of which is an alabaster statue of him reclining, holding a quill. 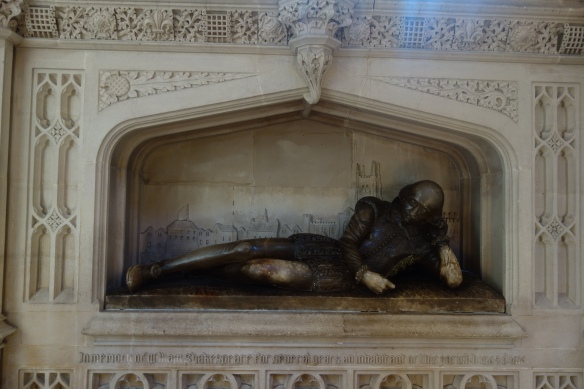 There’s also a memorial to Sam Wannamaker, the American actor who left the USA to avoid persecution during the McCarthy era and who inspired the reconstruction of the Globe Theatre. (Inspired isn’t the right word, really. He had to fight tooth and nail and put a lot of time, energy and sweat into getting it built) 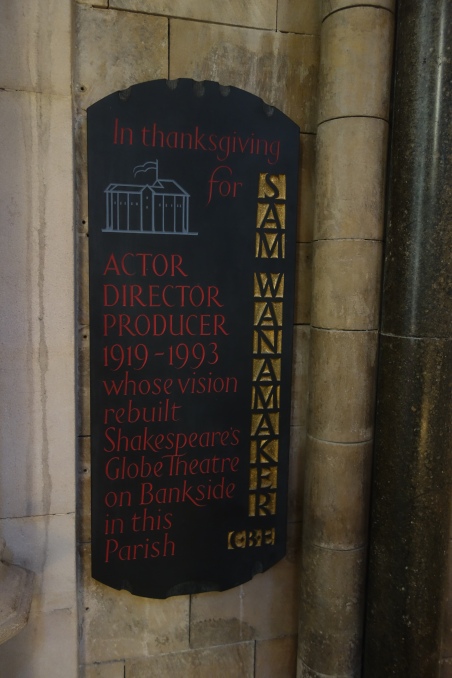 John Harvard the founder of Harvard University in the USA was born in the parish, and baptised in the church on 29 November 1607. He is commemorated by the Harvard Chapel in the north transept, paid for by Harvard University alumni resident in England. 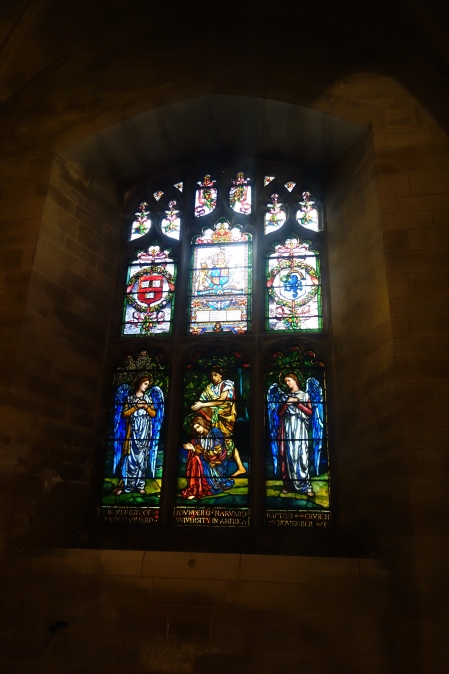 There’s some other attractive stained glass in the church, though the bright autumn sunlight streaming through them made it difficult to take decent photographs.  I rather liked this modern design in the retro-chapel

Outside there’s a small but attractive garden. Overlooked by Borough Market it’s something of an oasis of peace in a rather hectic neighbourhood. 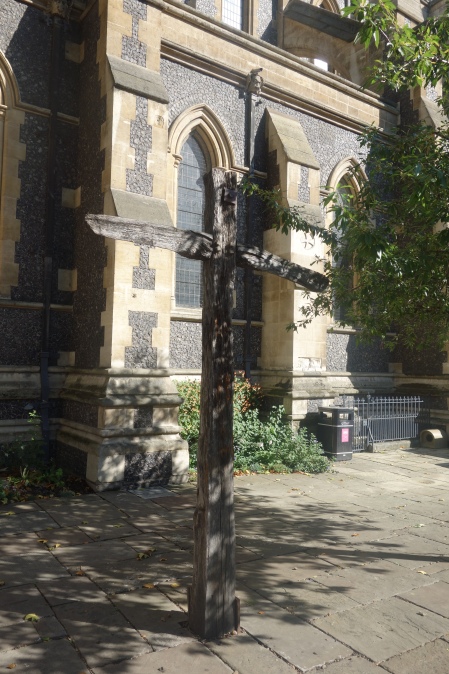 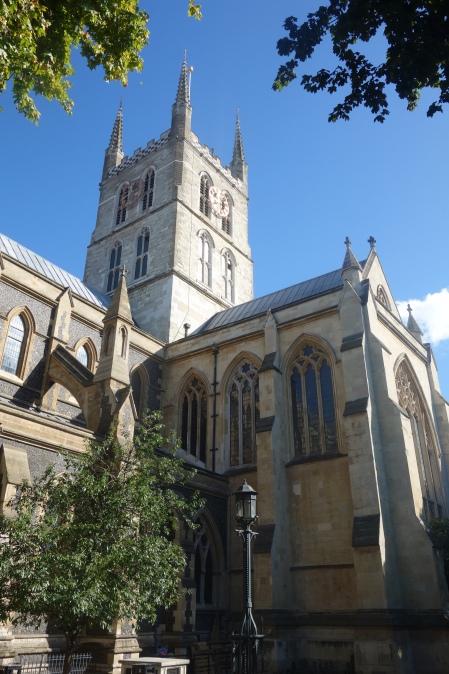 There was a recreated Augustinian herb garden at the back of the church. The monks would have grown herbs for both culinary and healing purposes – in medieval times the monks would have tended to the sick which is why many older hospitals have their origins in churches, monasteries and nunneries. 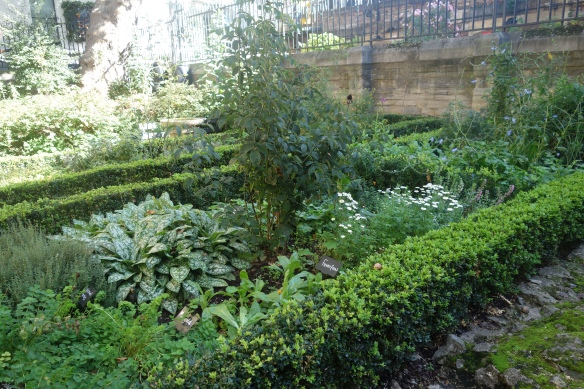 A view of the shard from the churchyard.

And a pleasant surprise. I spotted this sculpture in the churchyard. My immediate reaction was that it looked like a work by Peter Randall-Page.

Checking out the information board confirmed my suspicion