So, I didn’t catch the 3:30 train. At this time of year it’s going dark at 4 pm and I thought I’d spend a little more time in Arnside and then watch the sunset over Morecambe Bay from the top of the Knott. I reckoned I’d still have time to catch the direct train at 5:30. It was a good decision.

I took a break for a while followed by a short walk along the shore. Then I turned inland and set up the hill towards the Knott. The sun was already starting to go down and the temperature was dropping but my down jacket was keeping me nice and snug.

Leaving the streets of Victorian houses behind, I walked through woodland and then, emerging on tot he open fell, looking behind me the views opened up over the estuary towards the mountains of the Lake District

and to the east, there was Ingleborough on the horizon

Reaching the top of the hill I walked along the ridge to a viewpoint overlooking the Bay. The sun was beginning to set

The sun slowly slipping below the horizon

Until the sky and the sea were on fire

walked back to the station in good time to catch my train back to Wigan.

What a marvelous end to the day.

Over the years Arnside and Silverdale and the Cartmel penisnsula on the other side of the Kent estuary have become favourite haunts when I fancy a moderate expenditure of energy and an easy (usually) journey on the train. It’s less well frequented area than the Lakes as visitors zoom past on the M6. I hope that doesn’t change as since my visit it’s turned up twice on the TV. Arnside was the subject of an episode of the BBC series “Villages by the Sea” and it also featured as a “Winter Walk” on BBC 2 last week. Both on iplayer for a few weeks, I suppose.

After our visit to the Shrine of Remembrance we hopped on a tram to the popular seaside suburb of St Kilda, only 6 km from the city centre. A little bit of history pinched from Wikipedia

During the Victorian and Edwardian eras, St Kilda became a favoured suburb of Melbourne’s elite, and many palatial mansions were constructed along its hills and waterfront. Shortly after the turn of the 20th century, St Kilda served a similar function for Melburnians as did Coney Island to the residents of New York City and its history draws an interesting parallel. Densely populated postwar St Kilda became Melbourne’s red-light district, home to low-cost rooming houses. Since the late 1960s, St Kilda has become known for its culture of bohemianism and as home to many prominent artists, musicians and subcultures, including punk and LGBT. While some of these groups still maintain a presence in St Kilda, in recent years the district has experienced rapid gentrification pushing many lower socio-economic groups out to other areas

There’s some interesting old photos of the town here.

It was a sunny day, so there were plenty of other people who’d turned out to enjoy the beach and other attractions. On Sunday’s there’s a craft market along the Esplanade, so we took a look

The market was very good. The stalls were generally selling good quality arts, crafts and other items. We bought a painting from a stall run by an indigenous artist and had an interesting chat with him. Unfortunately I neglected to take a photo.

There was also a rather good busker, blasting out some raw blues

We stopped and watched him for a while.

After looking round the market we felt the need for some sustenance and went looking for somewhere to get a drink and a bite to eat. We didn’t have to go far. Acland Street, at the end of the Esplanade, is renowned for it’s cake shops . There’s a whole row of them all with windows full of different types of cakes, tarts, meringues and the like.

We were tempted and stopped for a coffee and cake.

Revived, we walked back along the Esplanade and then took a stroll along the pier where there were panoramic views cross the bay to the skyscrapers in the city centre.

Then we doubled back and walked along the beach

as far as Luna Park, an old fashioned funfair.

By then we felt we’d seen enough so hopped back on a crowded tram and set off to explore Prahan, another suburb.

We returned to St Kilda the next evening. It was quite a windy day and there were lots of people kite surfing in the bay

The reason for re-visiting was to see the little penguins (Eudyptula minor) that nest in the pier’s breakwater. During the day they’re out swimming in the sea, but return after sunset.

Waiting for the sun to go down we had a walk along the beach,

returning to the pier to watch a dramatic sunset.

The end of the pier, where the penguins nest, was crowded. So we weren’t the only ones who’d heard about the penguins! It started to go dark and, at first, it seemed like we had made a fruitless journey. But then there was some movement in the water and a few penguins started to hobble onto the breakwater. After a short while there were dozens of them. Unfortunately it was too dark to get any decent photos – you can’t use flash or you disturb the penguins. However, there’s some photos on the St Kilda Penguins website.

We stopped for a while, watching them come ashore and waddle about on and in the breakwater. They look rather comical on land, but it’s a different story when they’re in the water. Then it was back down the pier to catch a very crowded tram back to Federation Square.

Friday morning and the view from the bedroom window looked promising – sunshine, albeit with cloud over the tops of the fells. So it looked liked we be able to go ahead with our plans for the day – a walk up Wetherlam (2503 feet), one of the Coniston Fells, at the other side of the ridge from the Old Man.

We headed into the village and took the path towards Coppermines valley along the river. We passed the Ruskin Museum.

Along the path to Coppermines valley

The fells came into view

An industrial landscape with the remains of mining and quarrying industries. There’s still a working slate quarry in the valley

We took a right turn and started our ascent to Wetherlam

Looking back over Coniston Water

On our left there were great views of the Old Man and Swirl How. The cloud had largely cleared from the tops.

We passed a small tarn

We could see Windermere in the distance

Finally, we reached the summit of Wetherlam. There were a few other people around but I reckon it would have been a lot busier on top of the Old Man.

It was a clear day and there were great views of the surrounding mountains.

Helvellyn and the Fairfield Horseshoe

We decided to descend the way we’d come up and then cut down the valley to Tilberthwaite before doubling back to Coniston along Yewdale.

Taking in the view of Coniston Old Man

In the bright afternoon sunshine and good visibility the views, and autumn colours, were outstanding

The late, low afternoon sun was illuminating the distant mountains

and intensifying the autumn colours

The view across the valley

Looking back over the Yewdale crags

We stopped at the Co-op in the village to pick up some supplies, but it was still light and a lovely early evening so we decided to take a detour over to the lake

It was after 5 o’clock by now and the Bluebird Café was closing up. However, they have a take away window and this was still open so we bought coffees and sat for a while enjoying the view.

There were a few other people around, most of them tempted by a brew or ice cream

Canoeists coming back in after a trip on the lake

A brave soul going in for a swim

The sun began to set so time to make our way back to our B and B.

A beautiful sunset to finish off a great day 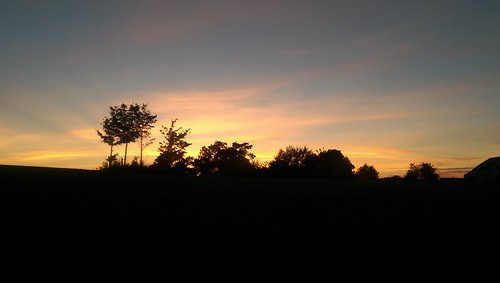