Work is taking me down to London a few times during June and July. The first of three visits took place last week. I caught a train late Wednesday afternoon ready for a meeting the next day. It’s not much fun sitting in a budget hotel room near Euston, so I decided to get out for a wander around Bloomsbury and Fitzrovia.

London’s a different world from a northern town like Wigan. So much more hectic and busier and with a lot more activity and things to see even while just mooching about. I’m fairly familiar with Bloomsbury as you’re in the district as soon as you step outside Euston station, but, even so, I often spot something I’ve not noticed before while I’m out “street haunting”.

Bloomsbury and nearby Fitzrovia are noted for Georgian and Regency architecture. But in amongst the neo-Classical squares and crescents there are other types of buildings, including a few in the Art Deco / “Streamline Moderne” style from the 1930’s. Here’s a few photos – some I’d seen before but a few I’d noticed for the first time. The light wasn’t great for photos, unfortunately, but here’s a few snaps anyway. 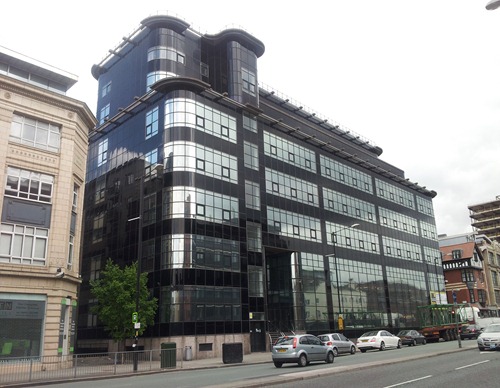 I was in Manchester Northern Quarter on Saturday and decided to pop over to Great Ancoats Street to take a look at the former Daily Express print works, a Grade II listed building. Opened in 1939, it’s an excellent example of a 1930’s Modernist structure. I first visited it on business over 20 years ago when it was still a working print works. However, the Daily Express stopped production in Manchester in the 1980’s and today it’s been converted into residential properties and offices. 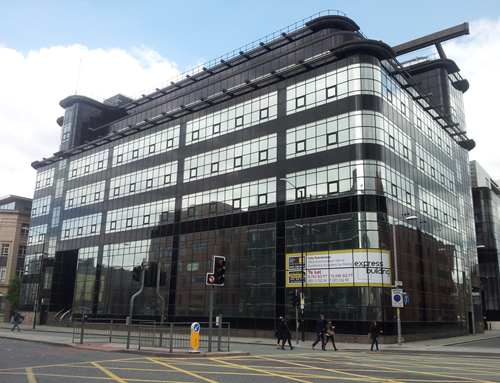 It’s a simple box like structure completely covered with glass – plain and opaque black. Originally the plain glass was transparent and the printing machinery could be seen from outside. It’s been replaced with reflective glass to create privacy for the new residents.

The corners are rounded, giving the building a streamlined appearance, so it could be considered to be “streamline moderne” in style. Although it is over 70 years old it has a very modern look and could easily be mistaken for a much more modern building.

I finally got around to going to visiting the Midland Hotel in Morecambe. Its a striking Modernist building dominating the sea front at the south end of the resort, built in the 1930’s. A fashionable place to stay before in the late 1930’s, it fell into disrepair after the war. It was renovated by the Manchester based development company, Urban Splash, reopening as a “boutique hotel” in 2008. It is now owned by the Lakeland Hotels chain.

It is often referred to as an “Art Deco” building, but that isn’t strictly true. Art Deco was a decorative and ornamental , rather than an architectural, style, although there are plenty of buildings with Art deco styling . The exterior of the has very little decoration. It is a simple, plain but elegant, white building without the ornamentation associated with Art Deco. It’s style is better described as “Streamlined Moderne” –  i.e. an architectural style emphasized curving forms, long horizontal lines, and sometimes nautical elements” (Wikipedia). The long, curved form of the Midland, which, from a distance, could be mistaken for an ocean liner, certainly meets that definition.

The architect was Oliver Hill. Although his early designs were in the Arts & Crafts style, he later began to design modernist style buildings. The Midland Hotel is his most well known commission. I found the following details on the construction of the building on the BBC website

“The building was constructed around steel frames with concrete slab floors and brick walls resting on shallow foundations which spread the load across the sandy surface of the site.  The walls were faced with white rendering composed of cement and carborundum, electrically polished to produce a surface resembling marble. This was relieved by the architraves of the principal windows which were treated with a mixture of carborundum and crushed blue glass.  The soffits of the projecting ledges and the undersides of the balconies were glazed in blue-green. “

The hotel stands on the sea front near the recently renovated “Stone Jetty”, the convex side facing the sea, and is flanked by well kept  public garden on it’s north side. 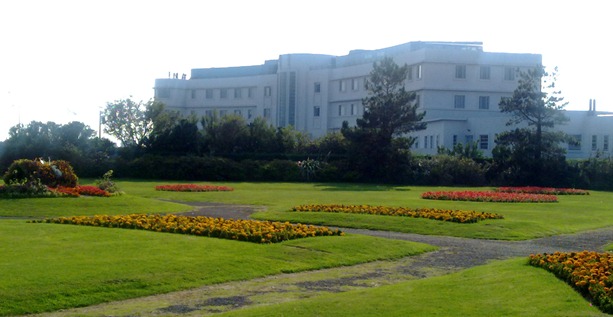 A glass structure runs along the front of the hotel at ground floor level. This wasn’t an original feature. A conservatory seems to have been added some time during the 1970’s. It was probably considered to be needed to allow guests to sit looking at the sea and the mountains over the bay on a cold day. That appears to have been demolished and replaced by the current structure during the renovation. From photographs I’ve seen the original conservatory spoiled the lines of the building. The replacement is predominately glass and is less obvious. I don’t think it is too detrimental to the look of the hotel. 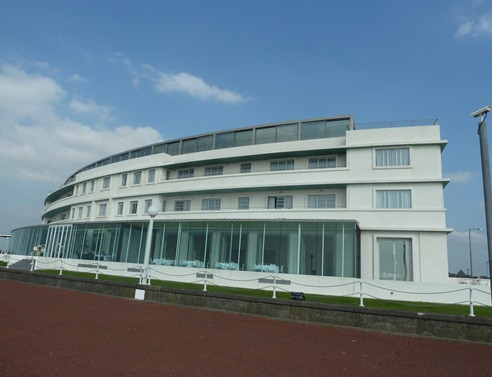 Another significant change made by Urban Splash during the renovation was the addition of a number of penthouses on the roof. I can understand why they were added. The hotel only has 44 bedrooms and suites, including these penthouses, and so they were probably needed to make the hotel a viable concern. However they obstruct the view of the tower and, to me, spoil the look of the building to some extent.

The entrance is on the concave east side of the building facing the car park and the former railway station, the hotel being originally owned by the London, Midland and Scottish Railway Company. The main feature on this side of the hotel is a central circular tower which protrudes slightly above the roof line of the main part of the building. It houses the principal stairwell – a spiral staircase – and contains the front entrance. It has three long narrow windows extending above the door up to a few feet below the top of the tower.

Just above these windows are the only significant decorative elements on the outside of the building – two seahorses carved by Eric Gill. They are meant to resemble Morecambe Bay shrimps and are used as a motif by the hotel. 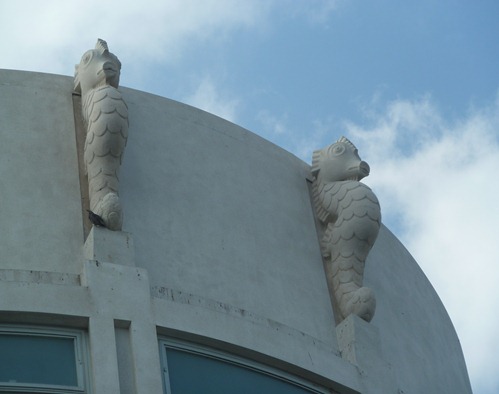 Eric Gill also produced three other significant works of art for the hotel which are still displayed inside. Directly behind the reception desk there is a large stone bas-relief based on a story from Homer’s Odyssey. It shows Odysseus being welcomed from the sea by Nausicaa. 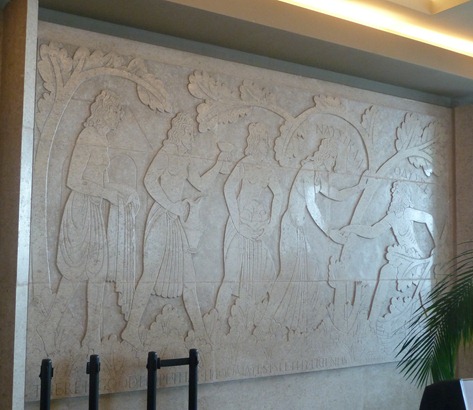 At the top of the stairwell is a medallion of Neptune and Triton accompanied by two mermaids, designed and carved by Gill and painted by Denis Tegetmeier, his son-in-law. It is edged with the words “And hear old Triton blow his wreathed horn“. The medallion is 10 feet in diameter and can be clearly seen from the bottom of the stairwell. Guests can get a closer view, but interlopers like us are prohibited from climbing up the stairs. It was restored and repainted during the renovation. 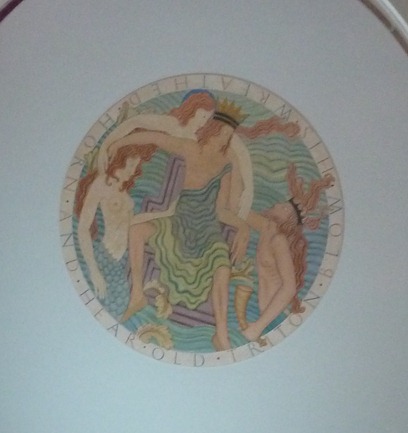 On the wall of the function room behind the Reception, there is a large map Gill created of the Lancashire and Cumbrian coastline centred on the hotel and extending from Whitehaven in the north down to Birkenhead. I like the cheeky way he has smoke from the Royal Scot steam train drifting over towards Blackpool (Morecambe’s rival) and down over Southport (another rival resort) and Liverpool. Morecambe and the Lake District are unaffected, suggesting that they’re clean areas away from the smoke and grime of industrial Lancashire. 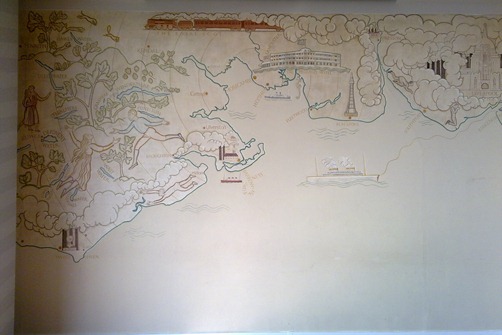 At the north end of the hotel there is a circular structure that houses the Rotunda Bar. The interior was originally painted by another well-known artist of the time, Eric Ravilious. However, this deteriorated very soon after the hotel was opened. Today the bar has been fitted out in a modern style.

The textile designer Marion Dorn created striking hand-knotted rugs featuring a directional pattern of waves for the entrance lounge. These have been recreated for the renovated hotel.

The new owners of the hotel haven’t opted for an “Art Deco” design for the interior, which has a more contemporary look.

Despite the modifications to the original design, I think that the the Midland Hotel is a beautiful building. An outstanding example of 1930’s Modernist architecture that needed to be preserved.

Friends of the Midland Hotel

Watch: Tom Dyckhoff has a look round the Hotel (BBC)