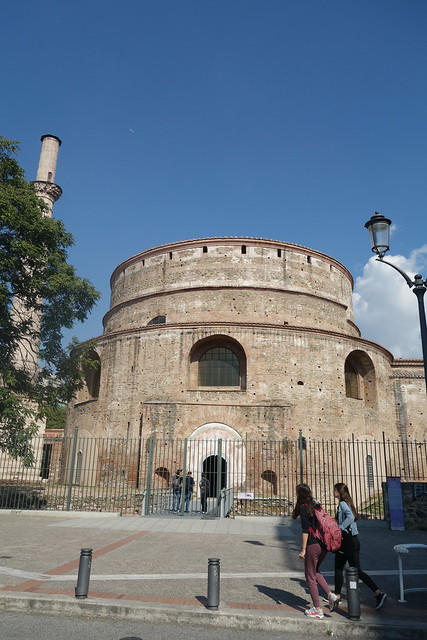 The Rotunda is a magnificent Roman building which is one of the main tourist attractions in Thessaloniki. It was built on the orders of Roman Emperor Galerius in 306 AD as part of his Imperial complex along with a triumphal arch and a large palace. It’s not clear what it was for – possibly as a mausoleum for Galerius or a temple. 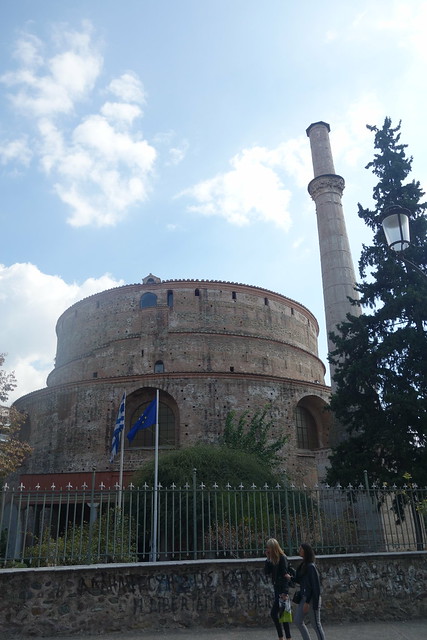 The Rotunda is a massive circular structure with a diameter of 24.5 m and walls are more than 6 metres thick. Originally it had an oculus (a hole in the centre of the dome) like the Pantheon in Rome, but that’s been filled in (I’m not sure when). 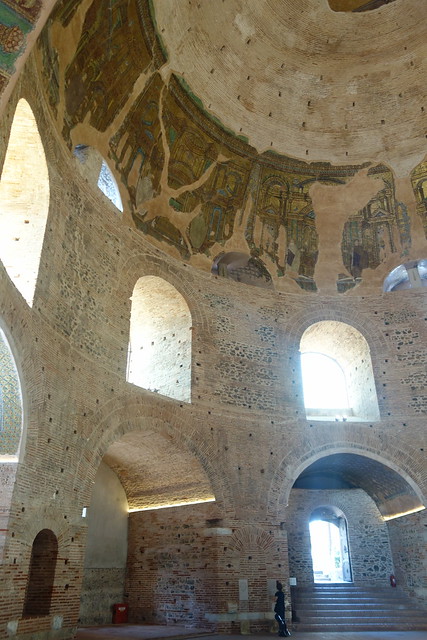 The Emperor Constantine had it converted into a Christian church (Church of Asomaton or Archangelon) in 326. This resulted in some modifications including the construction of the sanctum and the western gate opened to become the principal entrance, whereas the south entrance, which faces the rest of the Roman complex, had previously been used.

The building was used as a church for over 1,200 years until the city fell to the Ottomans. In 1590 it was converted into a mosque(the Mosque of Suleyman Hortaji Effendi) and a minaret was added. It was used as a mosque until 1912, when the Greeks captured the city during the Balkan War. It was re-consecrated as a church, dedicated to Saint George (Agios Georios) but the minaret was left in place. It’s no longer in regular use as a church but the Greek Orthodox Church has access to the monument for various festivities some days of the year. 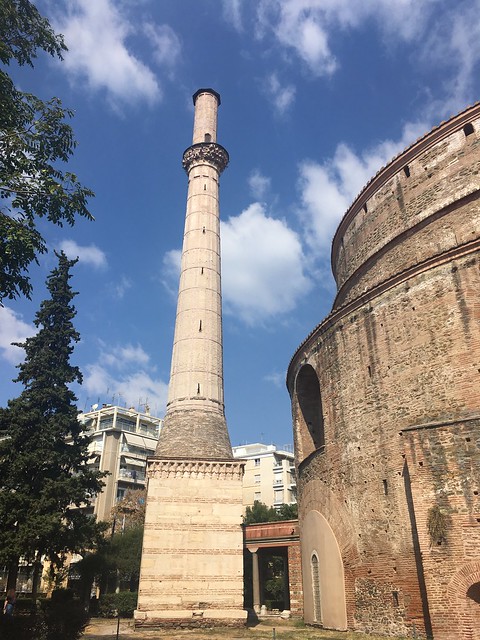 After it’s initial conversion into a church the Christians decorated the walls and dome of Rotunda with a mosaic, and some of which can still be seen today. Originally, the figure of Christ was depicted in the centre of the cupola inside a shining sphere. Unfortunately, little of this remains. However, below the cupola, bands of angels, martyrs and the saints of early Christian times are have been preserved in significantly better condition. Remnants of mosaics are also visible on the ceilings of the recesses. The remains of mosaics around the dome are still impressive today and must have been stunning when originally installed. 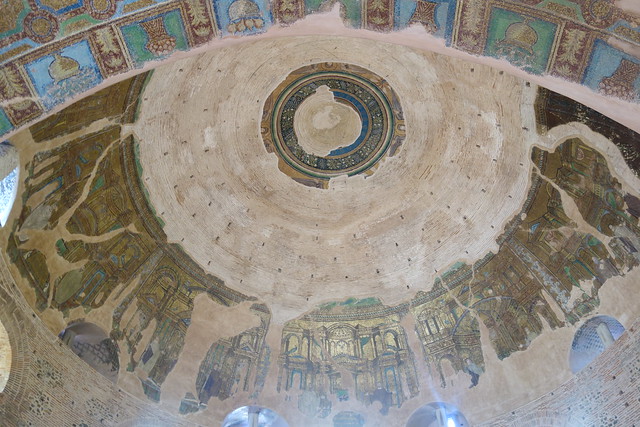 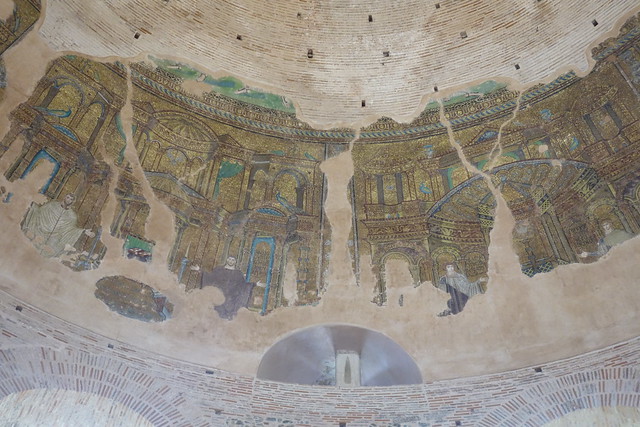 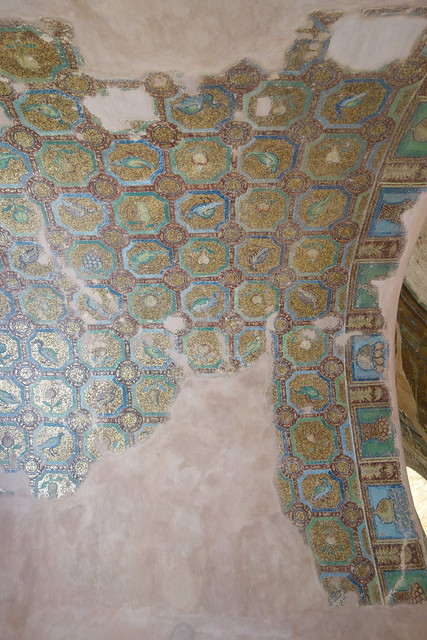 The remains of the triumphal arch are to the south of the Rotunda and has crafted marble panels on each pillar celebrating the victory of Galerius over the Sassanid Persians at the Battle of Satala. 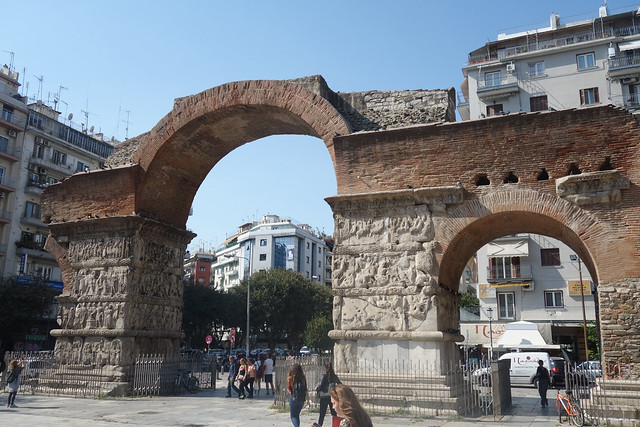 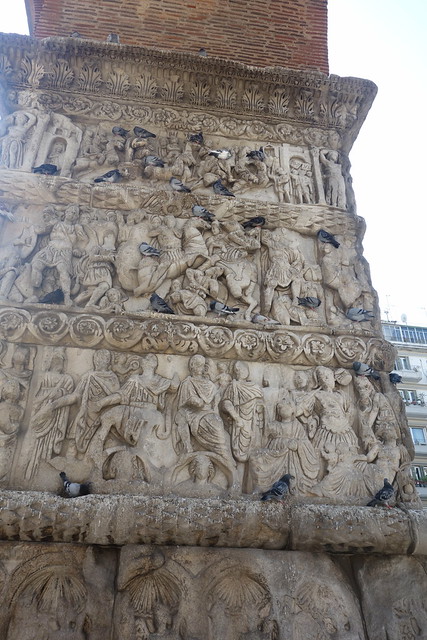 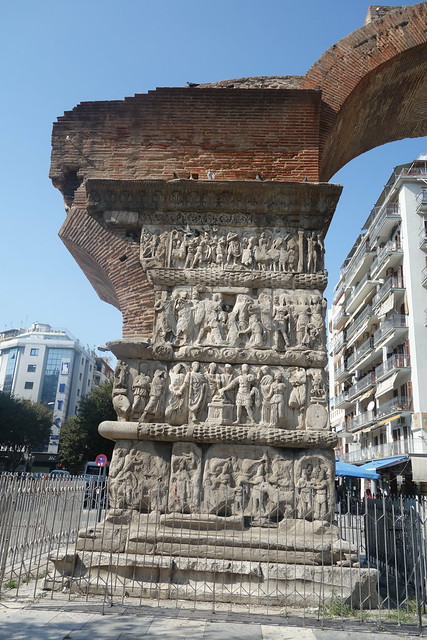 Originally it was eight-pillared gateway forming a triple arch, but today only the north western three of the eight pillars and parts of the masonry cores of the arches above remain. Nevertheless, it’s an impressive structure.

Until relatively recently the arch used to straddle one of the main thoroughfares through the city. But the road has been diverted and widened, by-passing the arch. 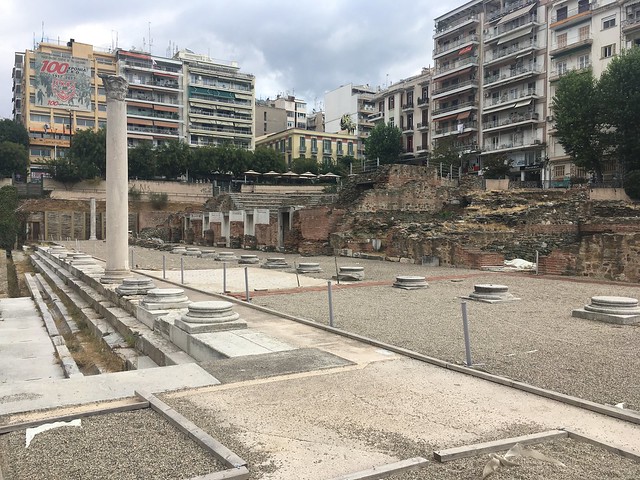 The Agora is the old Roman Forum and is right in the city centre, just to the north of the Aristotelous Square, which is rather like it’s modern equivalent. It was discovered by accident in the 1960’s when the area was being developed. It was constructed during the 2nd century A.D. on the site of an older Forum from the Macedonian period.

It’s possible to see the remains from the street, but we paid the 4 Euro entry fee to get a closer look, and gain entry to the small museum on the site. 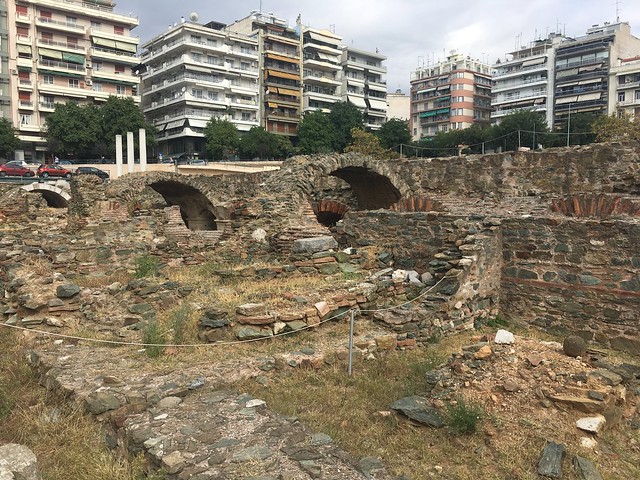 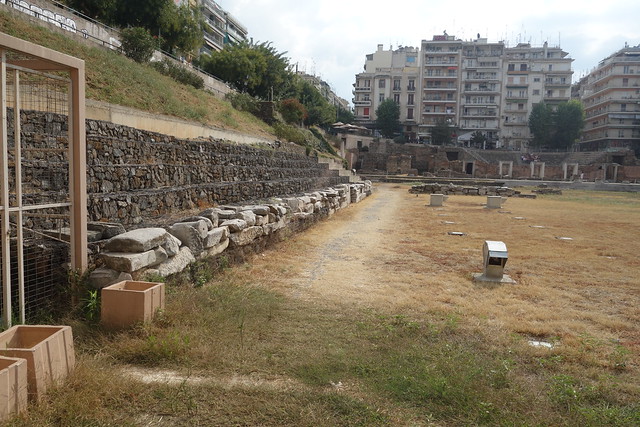 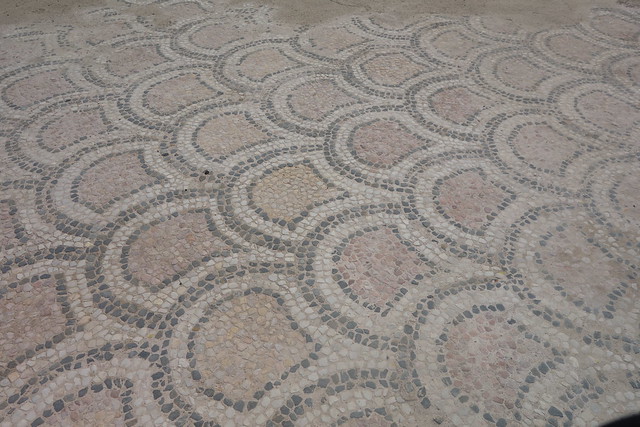 The square Upper Agora was paved and surrounded by stoae (porticoes) with two-tiered columns and decorated floors. On the eastern side there was the library and the odeum. Because of the considerable difference between the two levels, a ‘cryptoporticus’ (double subterranean stoa) was constructed under the south portico of the Upper Agora 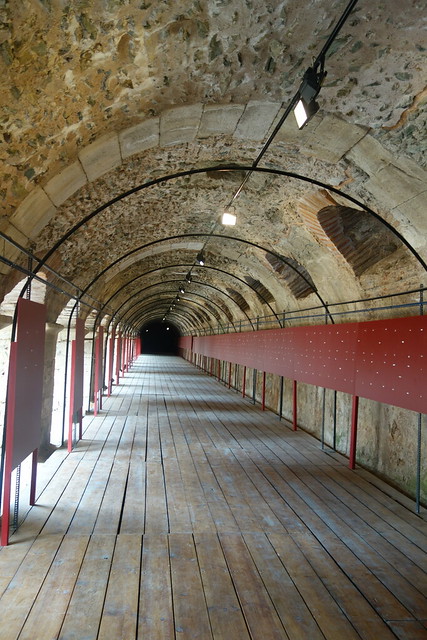 The small new Museum is reached by passing through the remaining passage and has an interesting collection of artefacts found on the site together with information on the history of the Agora, right up to modern times. 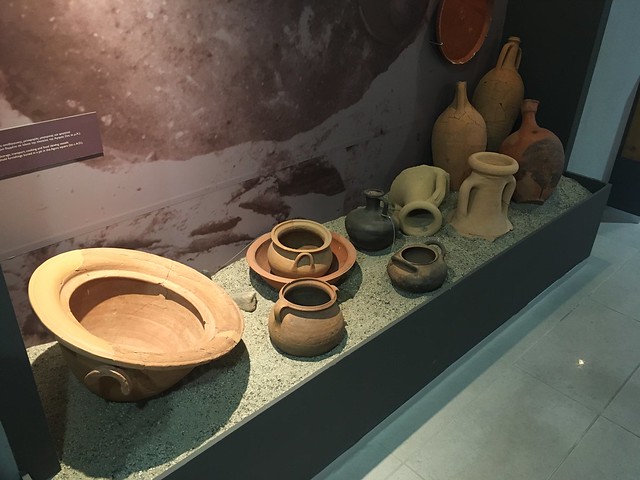 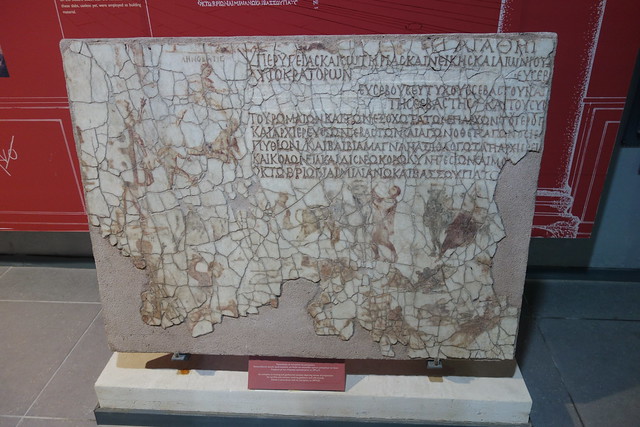 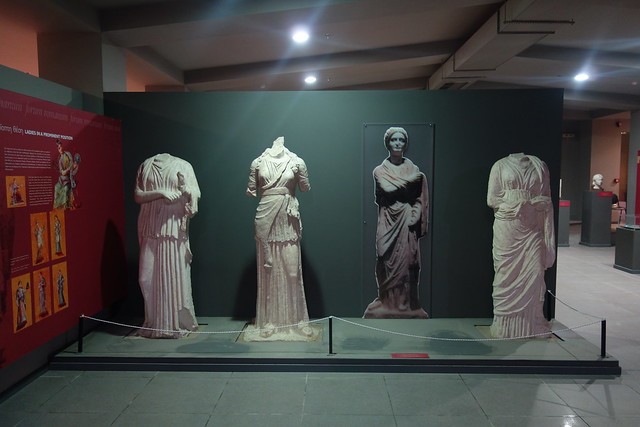 At one time there was a series of statues of the Muses facing the Via Egnatia. These were called the Incantadas (Enchanted Idols) by the city’s Sephardic Jewish community. By the 19th century, much of the colonnade was lost, but a segment remained, incorporated into the courtyard of a Jewish home. These were taken by a French archaeologist and can now be found in the Louvre. So it’s not just the British who are guilty of plundering Greek heritage! 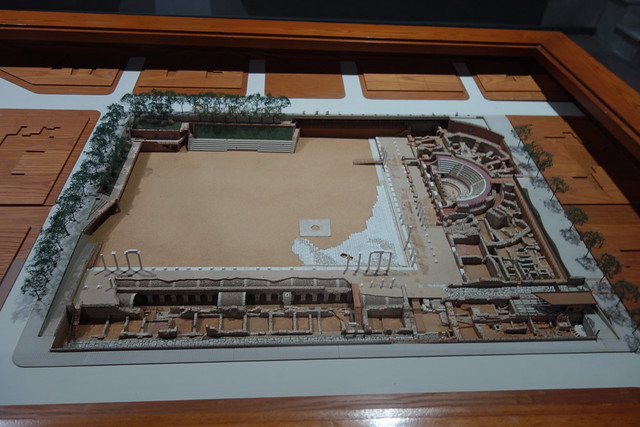 The large Odeum, or Odeon, a theater which would have been used for musical performances and gladiatorial contests, has been reconstructed and is still used for summer concerts. 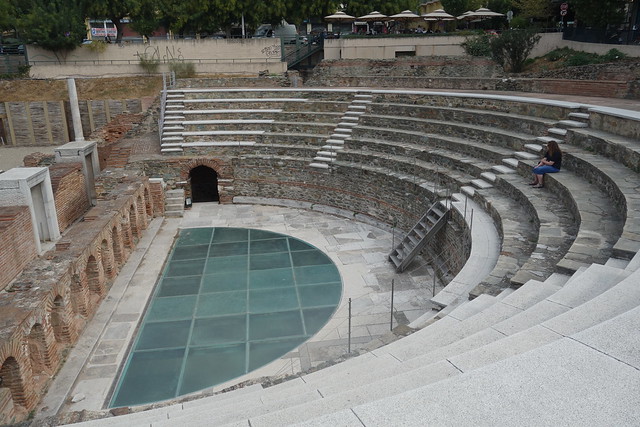