While we were in Oxford last weekend I visited the Ashmolean Museum mainly to have a look round the permanent exhibits. Unfortunately we were a month too early to see a major exhibition of works by Cezanne. I’d seen that the museum was hosting an exhibition ‘A Bestiary of Jewels’ and although I didn’t think it would be of particular interest I decided to have a look. I’m glad that I did

The exhibition featured the work of artist goldsmith, Kevin Coates, a London-based artist – “a jeweller, and sculptor in diverse materials” – who is also a musician.

According to the font of all knowledge (i.e. Wikipedia)

A bestiary, or Bestiarum vocabulum is a compendium of beasts. Originating in the Ancient world, bestiaries were made popular in the Middle Ages in illustrated volumes that described various animals, birds and even rocks. The natural history and illustration of each beast was usually accompanied by a moral lesson.

For his bestiary the artist has created creatures from  gold, precious stones, shell, and other materials, all paired with a significant historic figure – writers’ artists, philosophers, scientists and others. Each of these jewels is mounted on a painted Bestiary ‘page’.  The only word to describe the pieces is exquisite. They are delicately sculpted in miniature with amazing detail from precious materials. The work of a very skilled craftsman with real imagination.

The works included  “A Parrot for Flaubert”;

“A Starling for Mozart”; A Rhinoceros for Kaendler; and “A Dodo for Mr. Dodgson” (Oxford’s own Lewis Carroll) and “A Horse for Leonardo”

My favourite piece was this one

The exhibition also featured a selection of “Birthday jewels” which the artist has made over the years for his wife, Nel Romano. Given the materials he uses, he clearly isn’t exactly a poverty stricken artist.

The exhibition finishes at the Ashmolean at the end of March and will then tour around the UK the next stop being in Ruthin Craft Centre in North Wales.

Wytham is a very attractive, very “Olde Worlde” village of thatched cottages situated to the west of Oxford. Owned by  the Earls of Abingdon, for several hundred years, it was bequeathed to Oxford University along with the surrounding woodlands in 1942. There’s only 120 residents but the village sustains a church, shop and rather nice pub, the White Hart.

Wytham Woods are used for ecological and other research by the University, but they also allow access by the public for leisure purposes.

Deep in the woods there’s a small studio which is used by “Artists in Residence“, Robin Wilson and Rosie Fairfax-Cholmeley,

One thing that struck me during our visit to Oxford last weekend was that there was very little public art in the city centre. There’s lots of stunning architecture to see but very few examples of sculpture in the streets and squares. You have to look hard to see one rare example – a work by Anthony Gormley – which sits on top of the Blackwell’s arts bookshop on Broad Street. Perched right on top of this 4 storey building, I bet most visitors walk right past without realising that it’s there. 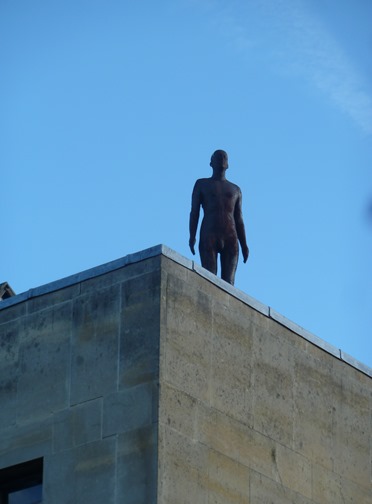 The statue is part of Gormley’s “Another Time II” series of figures and is owned by the University’s Exeter College. An anonymous benefactor provided the funds.

But there’s another work by Gormley, even less visible, in the City. Walking past Mansfield College, which is slightly off the main tourist route, I noticed a sign inviting the public to enter the grounds. So I did. And there, in the centre of the quadrangle was a sculpture – which couldn’t be mistaken for anything else but a work by Gormley. 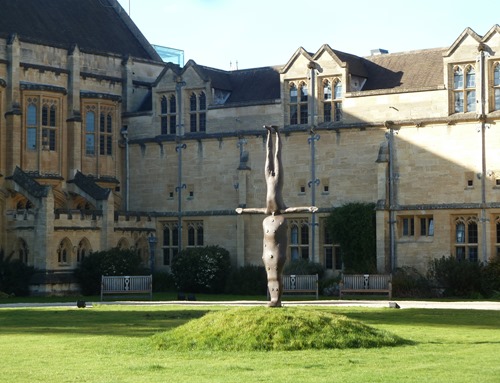 A little research revealed that the work was Present Time (2001), which is on a long term loan to the college.

PRESENT TIME (2001) is my attempt to engage with the mind/body problem. It is a materialisation of embodied mindfulness. The lower form is an enclosed mass, armed like a marine mine; the upper one open with all its limbs free, embracing space.

He goes on to tell us

It uses the stasis of sculpture to interrupt the living time of the viewer. The stillness of this materialist proposition invites us to reassess our position in time and space.

To be honest, I don’t understand what he’s going on about. But it’s a nice work. 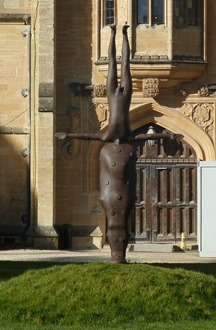 Last weekend we drove down to Oxford for a short break. The weather looked ominous as we set out with weather warnings from the Met office for wind and rain in Southern England, including Oxford, but we decided not to cancel. The journey down was much easier than I expected. The traffic was surprisingly light on the M6 and the weather didn't create too many problems. The rain wasn't too bad, hust a few very heavy showers, although the wind started to pick up and increased in strength as we drove south.
It was very windy over night and Saturday was windy with heavy showers but Sunday was a glorious sunny day. And the buildings clad in creamy Cotswold stone looked very attractive in the sunshine.

So although I spent some time looking round the Ashmolean, the Modern Art Museum, the Natural History museum and a couple of private galleries, I took the opportunity to get outside and walk around the streets and through the meadows in the fresh, enjoyingt he fresh air ans sunshine.
I was a little restricted on where I could walk, though. Like mush of Southern England, Oxford is enduring flooding, particularly along the Thames and the Cherwell.
The playing fields along the Cherwell behind the Botanic gardens were flooded (anyone forr a game of underwater rugby?)

Looking north along the Cherwell from Magdalen bridge

And the meadows behind Christs College were badly flooded.

As usual I snapped quite a few photos. Here are some of them.
The Radcliffe Camera

All Soul's College (with Hawksmoor's towers)

Magdalen College from the bridge

Last week we had a short break in Oxford, staying in the Malmaison hotel. Like all the hotels in the chain, it’s located in a converted building – in this case the former Oxford Jail, which is part of the Oxford Castle complex. It wasn’t cheap (I don’t think I’ve ever paid as much for a hotel room) but this was a special treat for a “significant” birthday.

The hotel is in a good location, close to the railway station (a good job as they have limited parking available and charge quite a lot to reserve a space), and as Oxford is a small town, its only a few minutes walk from all the main sites.

After checking in we took the lift to the top floor in the main cell block and walked out into a scene from “Porridge“.

Our room had originally been three individual cells – two making up the main bedroom with the bathroom in the third.

The bars had been removed from the original high level windows and an extra, larger, low level window had been knocked out of the exterior wall in the bedroom. 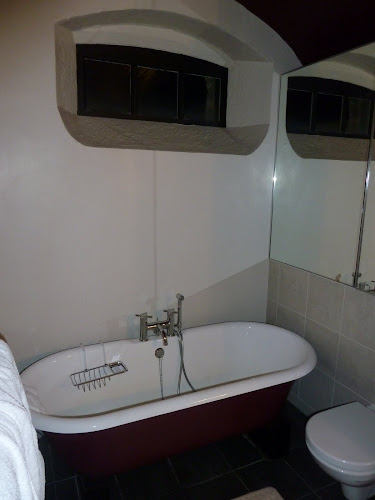 The accomodation was very comfortable with all mod cons. A different experience than that endured by the original inhabitants. We certainly didn’t feel like trying to escape!

I was working away for a couple of days at the beginning of this week on the Oxfordshire / Berkshire border. I had to travel down on Sunday for an early start on Monday morning so rather than spend most of the day brooding and waiting to set off on a long car journey I decided to leave early enough to be able to spend half a day wandering around Oxford.  I’d been there a couple of times before when I was down that way with work, but in both cases it was during the evening when all of the attractions were shut. So this time I thought I’d be able to have a better look round and actually get inside one or two of them.

I arrived at the park and ride at Thornhill around 2 and and caught the bus into the city centre. This saved the bother of havig to find somewhere to park and I probably saved a few pounds too as the car park is free and the bus fare was only £2-20 return. The bus only takes 15 minutes to drive into the city so I was there by 2-30.

I had a good wander round and managed to climb the Carfax tower and visit Christs College and Cathedral, and popped into the original Blackwell’s bookshop too.

I took quite a few photos. Here’s some of them. I’ve uploaded more on Flickr and Webshots.

Looking over the rooftops - view from Carfax tower 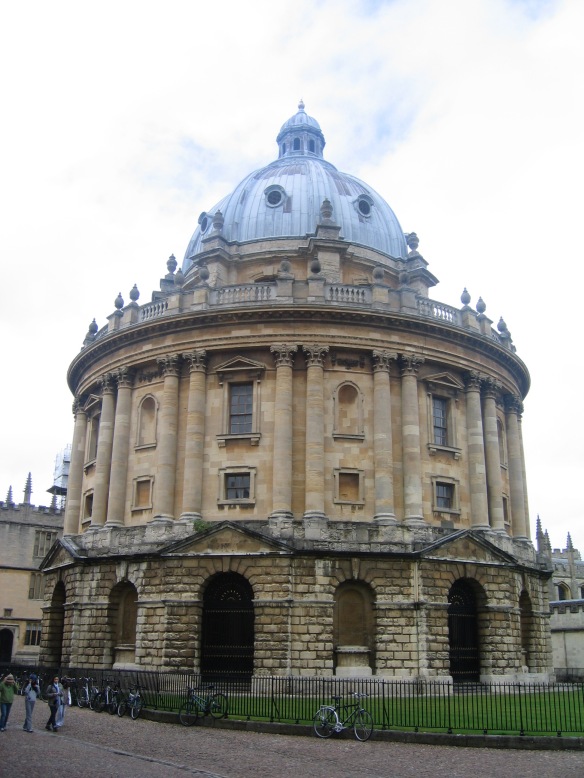 Christs from the Memorial Garden 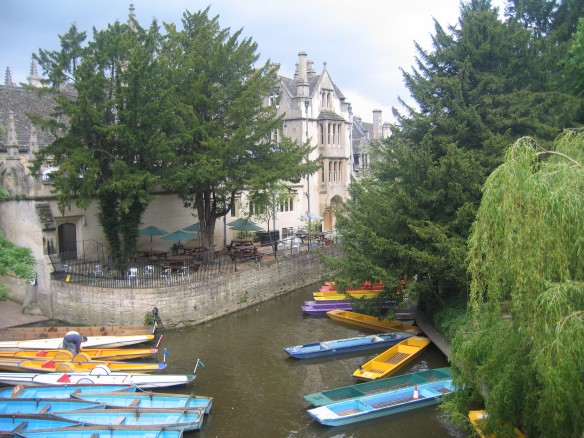 The Cherwell by Magdalen College