Last year we went to see Kate Rusby perform in Warrington the week before Christmas during her annual Christmas tour. We really enjoyed the concert so this year got in early to book tickets for her performance at the Bridgewater Hall in Manchester that took place last Tuesday, managing to get tickets towards the front of the the stalls.

I finished work a little early and we managed to get on a train to Manchester just before ten to five, do we arrived at Victoria about 5:30, which gave us a good 2 hours before the concert was due to start. We ues this as an opportunity to saunter through the Christmas market.

It’s massive, extending all the way from the Corn Exchange through to Albert Square with stalls packed into all the pedestrianised areas. We weren’t buying – even if we’d wanted to we didn’t want to be carting anything into the concert – but we had a good browse. However, we did end up buying some cheese off one of the stalls having been tempted by a sample.

We made our way to Albert Square which was very busy even at 6 o’clock. It was the original location for the Christmas Market which has expanded outwards over the years. There were lots of stalls selling food and drink of various types and nationalities so there was plenty to choose from and choose we did.

After eating we strolled through the final part of the market and then made our way over to the Bridgewater Hall, arriving at 7. So we had time for a coffee (for me) and mulled wine and a minced pie apiece (adjusting my insulin shot accordingly!)

And then it was time for the concert. We enjoyed it enormously again. Kate Rusby is an excellent singer – a beautiful voice – and she’s such a cheerful character, with a big smile permanently on her face.

She has a band – double bass, guitar, bouzouki (a traditional Yorkshire instrument?) and accordion –  who were supplemented by a small brass ensemble of 5 musicians. Her Christmas concert is based around old traditional versions of carols as sung around the pubs in South Yorkshire (a tradition that’s probably died out by now). Some of the songs were well known carols but sung to a different tune – for example While Shepherd’s watched sung to “On Ilkley Moor B’aht ‘at” (one song to the tune of another – if you ever listen to “I’m sorry I haven’t a clue” on Radio 4 you’ll know what I’m referring to). The brass band really make it feel Christmassy.

The concert was in 2 halves, finishing, after the encore, at 10. So they were on stage in total for over 2 hours, but it didn’t seem that long. So another enjoyable night out. And Christmas starts here!

On Sunday we went into Manchester for a family day out, a tradition for us just before Christmas. We’d got tickets for a concert at the Bridgewater Hall for the evening, but went in early afternoon, visiting the Manchester City Art Gallery then taking in the Christmas market that is spread out across the city centre.

Christmas markets have been held in Northern Europe, especially Germany, since the late Middle Ages and are a major tradition over there. They’re relatively new over here, but have become very popular. Manchester’s market was one of the first, the first one being held in 1999. It has really grown over the years and now spreads out over much of the city centre from Albert Square, down Brazenosse Street, King Street, St Anne’s Square, New Cathedral Street and around the Corn Exchange, in front of Selfridge’s.

There are stalls selling sweets, cheese, other food and drink, toys, Christmas decorations, candles, gifts and all sorts of other produce with traders from overseas as well as local companies. Particularly popular are the stalls selling take away food, German hot dogs and all sorts of Continental specialities, plus Glühwein, beer, Irish coffee and other alcoholic and non-alcoholic beverages.

It was VERY busy, especially in Albert Square, but we managed to make our way through the crowds and bought a few things,

After we’d had a bite to eat in Wagamamas just off Deansgate, we still had a couple of hours before the concert was due to start so we had another look around the market, which was open until 9 o’clock. It was dark by now and it was particularly festive and atmospheric with the stalls and decorations all lit up. 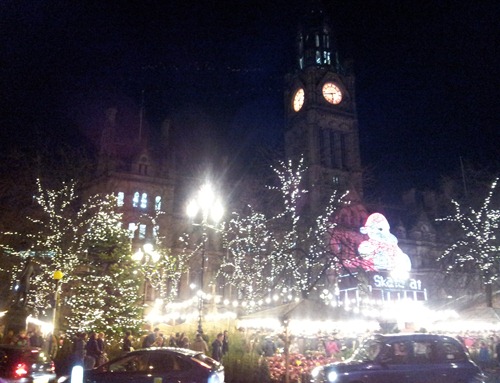