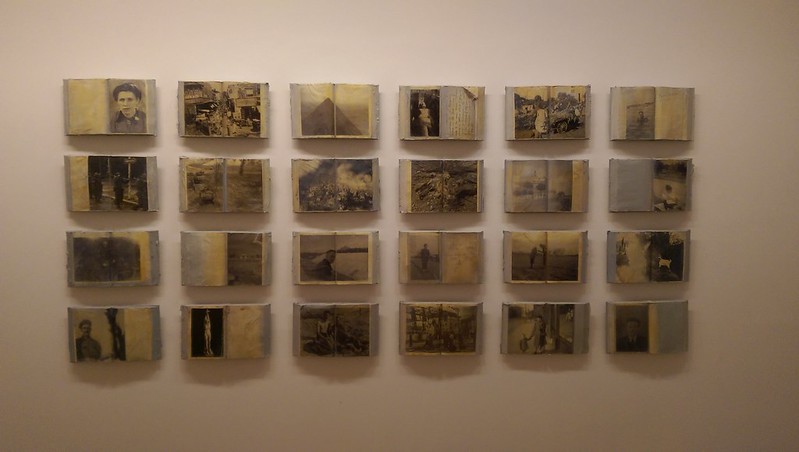 I discovered the work of Hughie O’Donoghue who was born in Manchester to Irish Parents, during my first visit to the Irish Museum of Modern Art back in 2009. His works often blend in (“incorporate”) transparent photographic images, merging together painting and photography. One such work, from the IMMA's collection, was included in their exhibition Approaches to Paper, currently showing in the Garden Gallery

When he first moved Ireland O'Donogue began producing work inspired by his own family history. Reading old letters and journals and studying photographs, he began to build up a picture of the lives of his parents and their forebears. He has particularly focused on his father’s experiences during the Second World War.

Anabasis, a work in twenty four parts, (2003) tells the story of his father's second tour of duty in Egypt, Italy and Greece in 1944/1945. The Greek title references an Ancient Greek military campaign against the Persians and the lengthy journey home. It's a multimedia work with old photographs printed on to copies of the Encyclopedia Brittanca, which were then reworked with ink and tissue paper.

The Crawford Gallery is Cork’s public art Gallery. The main part of the building, built in 1724, was originally the Cork Customs House. Emmet Place, where it’s located, today is a wide street but used to be a harbour off the north channel of the River Lee. The gallery was extended in  2000, substantially increasing the exhibition space.

I visited it twice during my short stay in Cork – in the daytime and then during Thursday evening when it’s open until 8 o’clock.

They have a decent collection of paintings but not on the scale of the public galleries in Manchester, Liverpool and Leeds.

Outside  I spotted this Banksy style stencil on the wall outside.

Inside, on the main staircase there was an attractive, contemporary stained glass work in the window.

Unfortunately I didn’t make a note of the artist’s name.

At the top of the stairs there was a sculpture by the Northern Irish artist, F. E McWilliam depicting a woman blown over by an explosion during “the Troubles”

I normally associate McWilliam with abstract works, but this is very realistic. A little research revealed that this work

is the last and largest sculpture from a series called Women of Belfast which, he explained, ‘was concerned with violence, with one particular aspect, bomb-blast – the woman as victim of man’s stupidity’. Although they can be read as a metaphor for women affected by violence, these sculptures were McWilliam’s response to the Provisional IRA bombing of the Abercorn Restaurant in the centre of Belfast on 4 March 1972. The bomb exploded in the restaurant which was packed with Saturday afternoon shoppers, killing two women and injuring some 70 other people.

The Gallery’s collection spans the centuries from the 16th Century onwards. I particularly liked the exhibition of works by Irish artists from the AlB Art Collection which was donated to the Irish State in February 2012 and will become part of the Crawford Art Gallery’s permanent collection. These were some of my favourites

A Place With Stones (1979) by Patrick Collins

The gallery also has a collection of watercolours, ink drawings and stained glass by Harry Clarke whose marvellous stained glass windows I saw in the Honan Chapel a mile or so away.

Clarke may be described as Ireland’s major Symbolist artist, whose synthesis of literary, musical, poetic and imagined visual images draws on a wide range of eclectic, sometimes obscure sources to produce an entirely original and idiosyncratic vision. This is as firmly rooted in the Yeatsian Celtic Revival and National Romanticism of late 19th/early 20th century Ireland as in European Symbolism, Decadence, and Art Nouveau of the same period, with the unusual extra dimension of consummate technical skill in stained glass.

Most of the earlier works on show and the temporary exhibitions didn’t particularly interest me, each to his own, and I didn’t intend to look around the large room full of casts of Classical Graeco-Roman sculpture. But on my second visit on my way out I popped into the sculpture gallery which is to one side of the entrance. I’m glad I did because tucked away on the wall in the corner was a large painting by Hughie O’Donoghue.

On Monday we drove up the M6 for another visit to the Abbot Hall Gallery in Kendal – our discovery for 2012. It was our third visit this year. In their 50th year they’ve been showing some excellent exhibitions and the current one, Vivid Field, featuring works by Hughie O’Donoghue , is no exception.

I first came across Hughie O’Donoghue, a Mancunian of Irish heritage who now lives in Ireland, in 2009 during a visit to the Irish Museum of Modern Art in Dublin. They were showing an exhibition of his works – Recent Paintings and Selected Works from the American Ireland Fund Donation. I was impressed by his dramatic and moving paintings. On until the end of December, the Abbot Hall exhibition features a large number of his paintings from both private and public collections covering a period of almost thirty years.

He creates paintings that are abstract and figurative at the same time, incorporating what are almost ghostly figures. Some including photographs. Many of them are on large canvases, although he also creates smaller, more intimate works as well. He uses colour extremely well particularly luminous yellows, creams and white, often apply the paint in thick layers.

the paintings are built up in successive layers of oil paint over time and following no clear plan or drawing but rather being freely improvised in relation to their subject, the painted surface often acquiring a weathered or excavated quality reflecting the parallels of his painting process to an archaeological dig. (Abbot Hall press release)

His subject matter can be rather morbid, but, and I don’t know why, I find many of them uplifting. Perhaps it’s the colours.

The exhibition included one of his earlier paintings Liquid Earth from 1984, a large scale work created just after he had spent 6 months as Artist in Residence at the National Gallery in London.

It’s a much darker painting than many of the other larger canvases on display. You have to look very carefully to see a human figure within the dark colours. It’s inspired by the bodies preserved in peat bogs, like Lindow Man, also known as “Pete Marsh”, discovered in a peat bog by commercial peat-cutters at Lindow Moss near Wilmslow in Cheshire in August 1984 .

Many of O’Donoghue’s works are inspired by photographs taken by his father when he was a soldier during the Second World War.

As well as the human figure, at the centre of his practice as a painter, is the recuperative act of remembering. The idea that memory is a creative process that draws upon the imagination and on our ability to be empathetic with the lives and experiences of others. (Abbot Hall press release)

There were a number of paintings inspired by his father’s experiences in Italy during the war – the Cumae series based on  photographs of allied soldiers relaxing on the beach and swimming in the sea at Cumae, a Mediterranean resort on the Italian coast close to Naples. The town has a long history, originally established as an ancient Greek Colony. The Romans believed it had been the home of the mythical Prophetess, the Cumaen Sybil who was consulted by the hero Aeneas before his journey into the underworld.

A Moment’s Liberty I

Another painting based on his father’s experiences is Fool’s House (2007).

This work also featured in the IMMA exhibition, so I’d seen it before. It’s a large canvas, incorporating a transparent photograph of a soldier who could be either sleeping or dead. I like the way he has incorporated found objects – a wooden panel and a post into the canvas.

There was a series of smaller paintings, the curiously named, The Changing Face of Moo Cow Farm (2012). In these works, rather like Monet’s studies of haystacks and Rouen Cathedral, the artists explores the changing effects of light on the same location.

“Moo Cow farm” was actually the site of a battle in northern France during the First World War. So again he has been influenced by the theme of war and destruction.

I thought it was another excellent exhibition. We’ve been so impressed by the gallery that we decided to become “Friends” of the Lakeland Trust, which will allow us unlimited access to the gallery and also Blackwell (The Arts and Crafts House near Bowness on Windermere) for the next 14 months. So we’ll probably be driving up the M6 again soon to take another look at the exhibition.

A full colour publication has been produced in liaison with Marlborough Fine Art at a reasonable cost of £7-95 to coincide with the exhibition.

During my visit to the Irish Museum of Modern Art last week I went to see the exhibition of 27 paintings by the Manchester born Irish based artist Hughie O’Donoghue : Hughie O’Donoghue: Recent Paintings and Selected Works from the American Ireland Fund Donation. I’d never heard of him before, so this was another new discovery.

His works are large scale – described as “monumental” in the exhibition blurb – and often blend in (“incorporate”) “transparent photographic images”, merging together painting and photography. A number of paintings displayed were based on photographs taken by his father during the second world war.

The exhibition featured a series of works commissioned by an anonymous American on the theme of the Passion and I felt that there was a strong religious element in much of his work.  Several paintings  featured men who were either asleep or dead with their arms outstretched as if they had been crucified, in particular:

There were also a number of paintings of  women who were  asleep (or possibly dead), in some cases floating in water. These included

They reminded me of Millais’s Ophelia.

I’m not usually a fan of out and out religious paintings which I often find oppressive and claustrophobic. But O’Donogue’s works were much lighter and modern in feel.  I liked “Three Studies for a Crucifixion” which were simple, abstract black and white images.  I was less moved by the Passion series, including Blue Crucifixion. Although they were technically good, I can’t relate to the theme.

There is a slideshow about the exhibition on the Irish Times website.