Last week I was back down in London with work. I had a consultancy assignment on the Wednesday so traveled down Tuesday afternoon. Rather than spend the night in my budget hotel room I decided to see if I could get a ticket for the theatre. I’d never been to the reconstructed Globe on the South Bank and managed to get a seat for the production of The Merry Wives of Windsor. Getting a seat was important for me. As a reconstruction of an Elizabethan theatre, most of the patrons have to stand in the area before the stage, just like the Elizabethan “groundlings”. But at my age I didn’t fancy standing for over 2 hours.

The play is a comedy – a rather bawdy farce, in fact. The main character, Sir John Falstaff, was played by an actor from Salford, Pearce Quigley , who I’ve seen many times on TV and who played the father in Mike Leigh’s film, Peterloo.

The structure and layout of the Globe means that it’s easy for the actors to interact with the audience. And they certainly did during this play. I wouldn’t have liked to have been stood too close to the left hand of the stage last Tuesday!

Although, being a too serious type of person (according to my family!) I usually would plumb for a tragedy rather than a comedy, but I enjoyed the production. The cast were very good, The production was light-hearted and there were plenty of laughs. Pearce Quigly was excellent in the role of Falstaff and his comic timing was pretty much perfect. For parts of the play I could have been watching Monty Python as Richard Katz, in his role as the French Doctor Caius, with a comical accent could quite easily have been mistaken for one of the French knights from Monty Python’s Holy Grail.

After the play, leaving the theatre, I had a good view over the City of London.

It was a balmy evening so I walked back to my hotel, clocking up a few more miles towards my 1000 mile challenge target.

While we were on holiday up in the Lake District, the London based Globe Theatre’s touring company were performing Romeo and Juliet in the garden at Blackwell on three consecutive evenings, organised in conjunction with the Bowness based Old Laundry Theatre . We decided we’d like to and see it as we weren’t staying too far away. 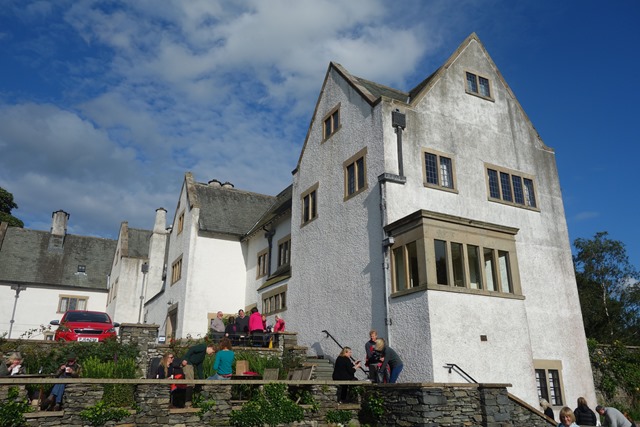 As we’d left booking tickets to rather late the performances on the Monday and Tuesday were fully booked but we managed to get tickets for the Wednesday. This ended up working out quite well for us. The booking website was clear that the performance would go ahead in all but the most extreme weather conditions. So we made sure we had our waterproofs with us. Luckily, we didn’t need them. Although it had rained for the first two evening the Wednesday performance started in bright sunshine and it stayed dry. However, the temperature wasn’t so warm, especially as the sun began to go down, and we needed to wrap up well. The lamb stew and coffee we bought helped to keep us warm as well.  The setting, by the side of the house with views of Windermere, Grizedale forest and the Coniston Fells was familiar to us due to our regular visits to Blackwell, but magnificent none the less.

The play was performed by a small company of only 8 actors most (in fact, all except the two leads) had to play multiple roles, differentiated by their costumes and clever use of regional accents. They performed on a “double decker” mobile stage, very useful for the famous balcony scene but also cleverly used throughout the play. Its design was based on those used by Elizabethan companies, when most plays were performed by travelling players. 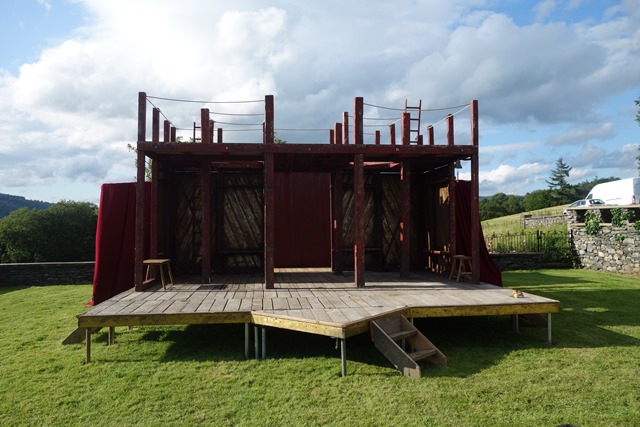 I’ve never seen Romeo and Juliet before – either on stage or the films made of it – and never read or studied the text. But the plot was familiar to me, so there were no major surprises. I thought the ending was a little weak. The warring clans were rather quick to make up after the deaths of the two lovers, but hey, who am I to criticise the Bard!

The company pulled the humour out of the play, more so than most productions (I was told!) and there was effective use of music too. The play started and finished with the actors playing instruments and singing and music and other sound effects were used to enhance the mood throughout the performance. The two main roles were played by young actors – Juliet was only meant to be 14 after all. I thought they did well. There were strong performances from Sarah Higgins as the nurse (with a broad Scottish accent) Matt Doherty as Tybalt, Paris and a Geordie servant, Tom Kanji as Benvolio and Friar Laurence and Stephen Elder as Juliet’s father.  The latter was particularly good in the scene where he insists that Juliet marries Paris, seamlessly going from the loving father to enraged dictator.

The performance finished as it was turning dark and we had a 30 minute journey back down the country roads to our cottage.

All in all an enjoyable evening.

On the second day of our brief trip to London we visited the reconstruction of the Globe Theatre on the South Bank, next door to the Tate Modern. They run regular tours  of the theatre for visitors and there’s a museum with displays about the history of Shakespeare’s Globe, the reconstruction and aspects of the running of the modern theatre. 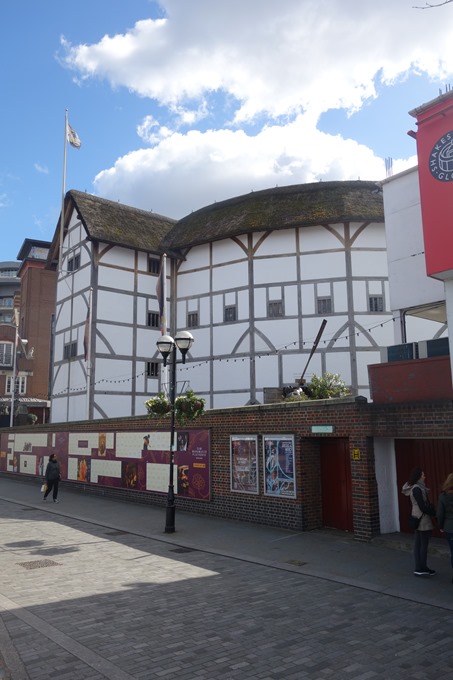 The reconstruction of the Globe was the idea of the American actor, Sam Wannamaker who moved to Britain after being blacklisted by the McCarthyite witch hunt in the the US during the early 1950s. We’d been to see his daughter Zoe acting in the play about Stevie Smith at te Hampstead Theatre the previous evening.

The guided tour of the theatre is meant to last 30 minutes and took us into the galleries and pit area where the audience at performances sit and stand. However, we didn’t get to see any of the backstage areas or stand on the stage. The Globe’s website explains

The Globe is a faithful reconstruction of an Elizabethan theatre: in Shakespeare’s day productions did not have scenery or sets like in modern day theatres, so there was no need to have a backstage area for making props and scenery, and there were also no dressing rooms.

Our guide explained about how the theatre was recreated and talked about the audience experience both in Shakespeare’s time and today.

The pit in front of the stage would have been occupied by the “groundlings”. Wikipedia tells us

A groundling was a person who frequented the Globe Theatre in the early 17th century and was too poor to pay to be able to sit on one of the three levels of the theatre. By paying one penny, they could stand in “the pit”, also called “the yard”, just below the stage to watch the play. Standing in the pit was uncomfortable, and people were usually packed in tightly. The groundlings were commoners who were also referred to as stinkards or penny-stinkers. The name ‘groundlings’ came about after Hamletreferenced them as such when the play was first performed around 1600. 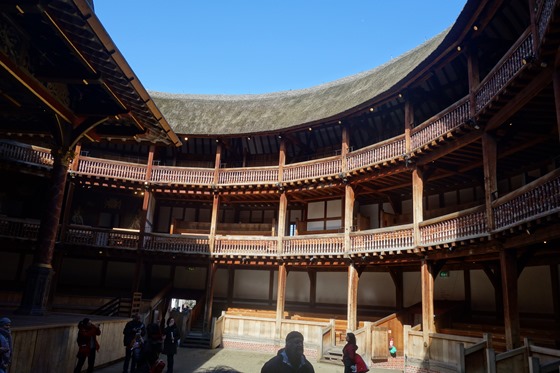 After the tour of the theatre itself we had a look around the museum. 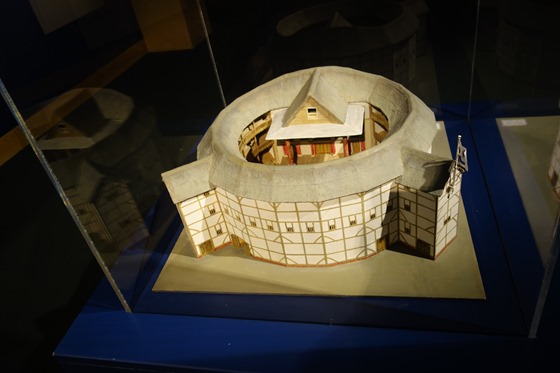 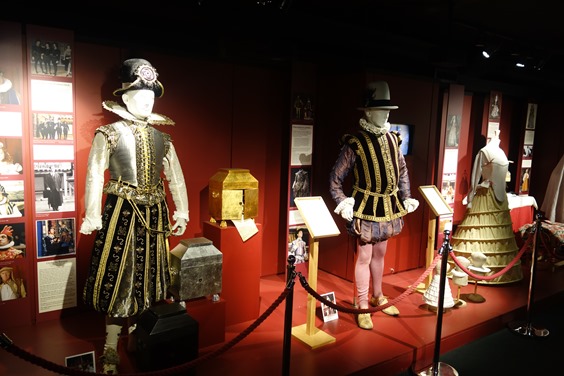 After the tour we both felt that we’d like to experience a performance (some friends of ours have been a few times and have enjoyed it) but I doubt that we’d cope with standing in the pit for three hours! So I guess we’ll pay the extra for a seat on the  (probably not that comfortable!) wooden benches in one of the galleries!