I’m back working in Ireland this week. As a strong believer in the concept that there is more to life than work, I often try to fit in some sightseeing or “cultural activity” during my trips away and so on Sunday I caught the early boat so that I could have an afternoon in and around Dublin. My first port of call was a favourite, the Irish Museum of Modern Art in the old Kilmainham Hospital.

One of the exhibitions currently showing at the IMMA, in the Garden Gallery, is a retrospective of the work of a German/Irish sculptor Gerda Frömel.

An incredibly well regarded artist during her lifetime, her work is no longer well known and has not been on exhibition since a 1976 retrospective at the Hugh Lane Municipal Gallery of Modern Art, Dublin the year after her untimely death. This exhibition seeks to bring new work to light and to reinstate Frömel as a modern Irish master. (IMMA website)

Gerda Frömel, was an ethnic German who was born in Czechoslovakia in 1931. After the Second World war her family, along with other ethnic Germans was expelled and had to move to Germany. She enrolled in the Academy of Fine Arts, Stuttgart in 1948 and later went on to study in Darmstadt and the Academy of Fine Arts in Munich, where she studied metalwork and sculpture. She married a fellow sculptor, Werner Schürmann in 1955 and the couple moved to Ireland the next year when he took up a teaching position at the National College of Art in Dublin. She lived in the Emerald Isle for the rest of her life.

Schürmann established an art foundry in Dublin and  Frömel’s early work was dominated by bronze castings of animals, human figures and plaques/friezes. The exhibition included a number of these in the first two rooms – the second room being a partial reconstruction of her first solo exhibition based on photographic evidence. Many of the animal and human figures were clearly influenced by the work of Giacometti.

Tree Heads c.1976 – an abstract sculpture of trees inspired by the heads of her three sons – the title a play on words (image source Crawford Art Gallery Cork)

Later, in he 1960’s Frömel began to concentrate on producing abstract works in stone – marble and, particularly alabaster. Many of these reminded me of some of Barbara Hepworth’s work, particularly with her use of circles representing the moon. It‘s not clear whether she was influenced by Hepworth (I’m sure she would have been aware of her) or whether she arrived at these ideas independently. 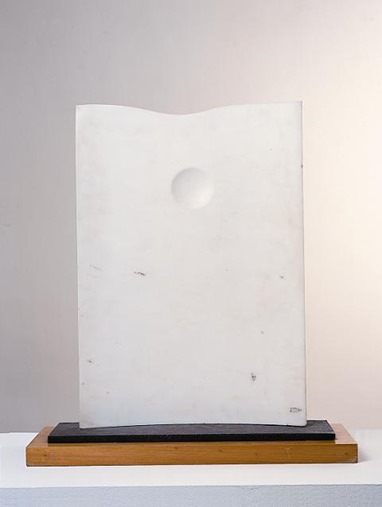 The first room upstairs was devoted to he architectural work. She was given a number of commissions to produce large scale sculptures to be displayed outside buildings. The most notable being for the Carroll’s cigarette factory in Dundalk and there was a large photograph of this work on display. The factory is a Modernist building and it was originally proposed by the architect to include a sculpture by Henry Moore, but the client intervened and insisted on a sculpture by an Irish artist. In this case, despite her origins the establishment were prepared to claim her as Irish.

The second room upstairs was another partial reconstruction of an exhibition, this time from 1970, and contained a number of sculptures of ovoid shaped heads carved from stone – alabaster and marble.

In the 1970’s she produced a number of abstract works inspired by the night sky and the Chinese yin-yang symbol. She was producing larger works, using different materials (bronze, aluminium and marble) and techniques.

The final room was devoted to sculptures based on Eve and the legendary water sprite Odine.The latter may have been connected to the loss of her 2 year old daughter by drowning a number of years before. 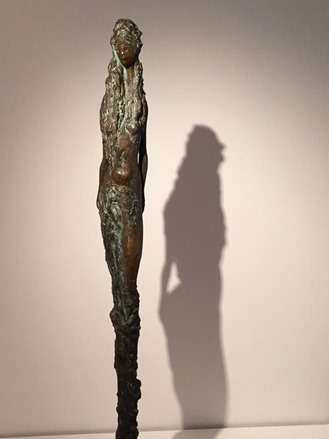 Besides the sculptures the exhibition also includes a number of drawings. They were produced by making small marks on the paper, which, rather like a Pointilist painting, combine when viewed from a short distance to form an abstract shape. Some of the marks look as if they were made almost by stabbing at the paper with her pencil – a sculptural approach to drawing, perhaps.

Frömel died in 1975 when, at the relatively early age of 44,  she herself was drowned.

Since then Frömel’s work has largely been neglected. I think there were probably a number of reasons for this. I suspect that one of these was that there was some prejudice against her in the Irish art establishment as a foreigner. The exhibition catalogue reproduces a rather hostile report of a scholarship she was awarded by the Irish Arts Council  and she was later told that she was ineligible for  a Fellowship in Sculpture awarded by the Arts Council as she was a foreigner. But times change and the IMMA exhibition has brought her to public attention in Ireland. It is always pleasant to attend an exhibition “on spec” and discover works I like by an artist I hadn’t heard of previously. I’ll certainly be on the lookout for her work from now on.

So an enjoyable exhibition with many excellent works. One criticism though is that I felt that the flat artificial lighting in all the rooms (apparently necessary to protect the drawings) did not display many of the works to best effect. It was difficult to make out the figures on many of the reliefs in the second room – directional light is needed for this. And she used alabaster, a translucent material which really needs good lighting show it off, for many of her works and the diffuse artificial light did not do them justice. One abstract alabaster piece displayed in the window was really quite stunning with the light shining through it and that would have been true of other alabaster works on display.

Works by Gerda Frömel in the IMMA collection