One thing I especially like about Alvar Aalto is that as a Modernist architect he was able to break away from the “white cube” and use more traditional materials to construct his buildings. An example of this is the Cultural Centre in Helsinki which is located north of the city centre a short walk to the east of the main Mannerheimintie road and north east of Töölönlahti. A relatively sort diversion during my walk around the bay took me there.

This is a multi-purpose building he designed in 1952 for the Finnish Communist Party – combining the party headquarters, association facilities, and a cultural centre. The office block and a connecting wing are very similar to his Rautatalo building and Academic Bookstore – a copper clad facade dominated by reflective glass windows. But he most interesting and original part of the complex is the red brick faced auditorium.

It’s irregular, curved structure is about as far away from a white box as is possible!

Aalto designed a special wedge shaped brick for the auditorium

which allowed him to create the complex asymmetric curves

Much of the building work was done by volunteers. This sculpture that stands in the courtyard between the three wings is a tribute to their efforts. 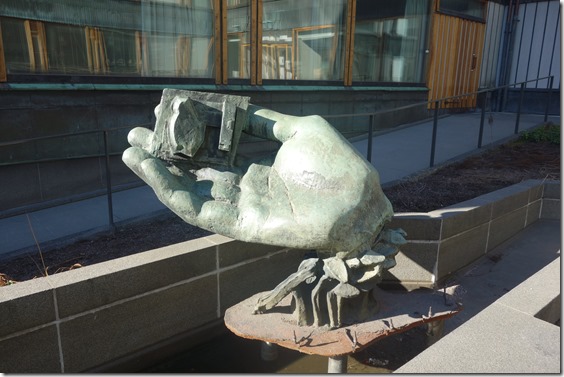 After visiting the Aalto House I walked a short distance down Riihitie to take a look at a complex of apartment blocks designed by Aalto to house workers employed by the National Pensions Institute.

There are four blocks that face onto a pleasant grassy “piazza”

One of Aalto’s final and most well known buildings is Finlandia Hall in the centre of Helsinki, on the south shore of Töölönlahti. It was originally intended to be part of a cultural quarter that was never realised. It was completed in 1971, a few years before Aalvo’s death. 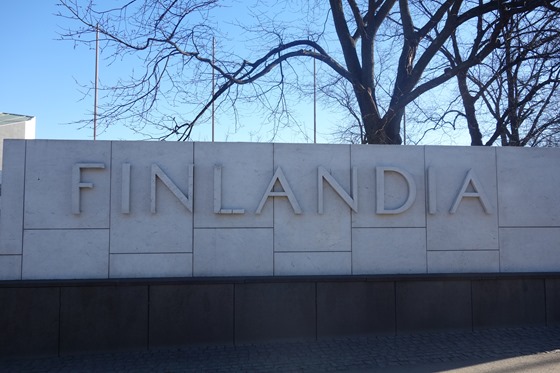 It’s a substantial building clad in Carrera marble, a favourite material of Aalto’s although not particularly suitable for the harsh Finnish winter climate. The marble soon began to crumble and safety nets had to be erected to protect pedestrians. Eventuaky the decision was taken to reclad the building with a more suitable white marble, keeping the appearance the same, at a cost of over 3 million Euros. But the replacement panels are also being affected by the cold winters.

A further problem is that the acoustics  are notoriously poor. Not great for a concert hall! 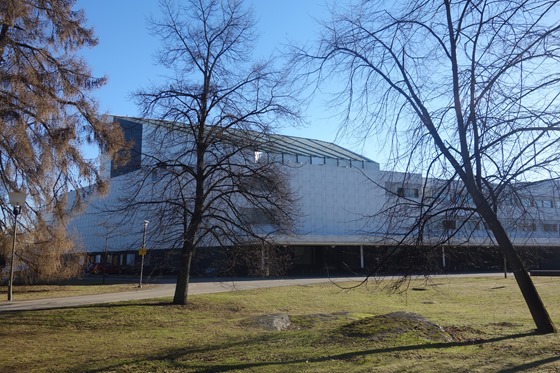 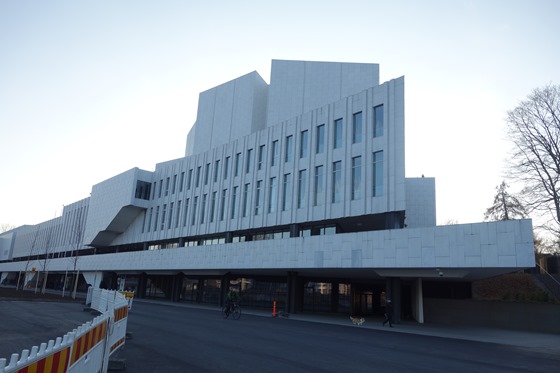 It’s a striking building, but something of a flawed masterpiece.