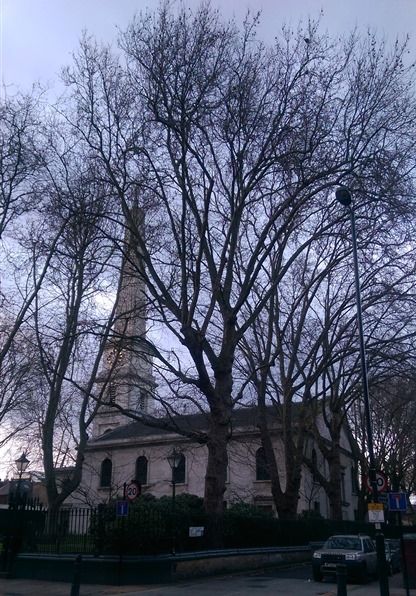 My first meeting during my visit to London last Wednesday was in Finsbury Square in South Islington, just outside the northern boundary of the City of London. I was done by 5 o’clock and needed to make my way over to St Pancras for a meeting at 6:30 so had a little time to spare as it’s only a short hop on the tube. So I decided to take a slightly longer route back to Old Street tube station via the Barbican and then along Whitecross Street as I’d never been in that part of London before.

Walking up Whitecross Street the view along the road was dominated by an unusual church spire. “There’s only one architect who could have designed that” I thought. “Nicholas Hawksmoor”. I was right. The church in question was Saint Luke’s Old Street. It was designed by John James, but Hawksmoor was responsible for the spire, the west tower and the flanking staircase wings. So now I can say I’ve seen all 6 1/2 of Hawksmoor’s London churches!

The spire is particularly distinctive, a fluted obelisk. Probably unique for an Anglican church, but that’s Hawksmoor for you! 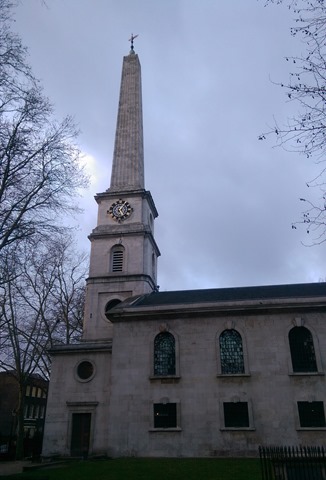 There’s a nice sketch of the spire here.

Originally there was a brass weather vane on top of the spire that local people thought looked like a louse, earning the church the name “Lousy St Luke’s”

The church was consecrated in 1733, but suffered from subsidence due to being built on marshy ground and repairs were already being undertaken in 1734,  Damaged during the London Blitz and suffering badly from subsidence the building was declared unsafe in 1959. The roof was removed and the church abandoned. It was derelict for many years but it was restored at the beginning of the 21st Century so today the church building is a music centre operated by the London Symphony Orchestra and known as LSO St Luke’s. It is the home of the LSO’s community and music education programme, LSO Discovery.

The BBC have also filmed some concerts there, including this one by P J Harvey from 2004, not long after it reopened

I finally managed to complete my collection of Nicholas Hawksmoor’s London churches this week. During a business trip down to the Smoke when I was staying overnight near Blackfriars, as it was a pleasant evening I went out for a stroll and ended up wandering over past St Paul’s and towards Bank Underground station. and here it was – St Mary’s Woolnoth.

It’s the smallest of Hawksmoor’s churches and built in 1716-1727 on a “closed” site, which means the sides and rear are obscured. Hawksmoor used Classical features, but in an unusual way , and that’s certainly the case with St Mary’s. It’s not his prettiest building. I think it has a somewhat harsh appearance. It’s built of Portland stone but it’s rather grubby which contributes to this.

The lower half of the front (west) facade is heavily rusticated and punctured by a large door with a semi-circular window about half way up. But the dominant feature is the unusual double tower with Corinthian columns and two small turrets 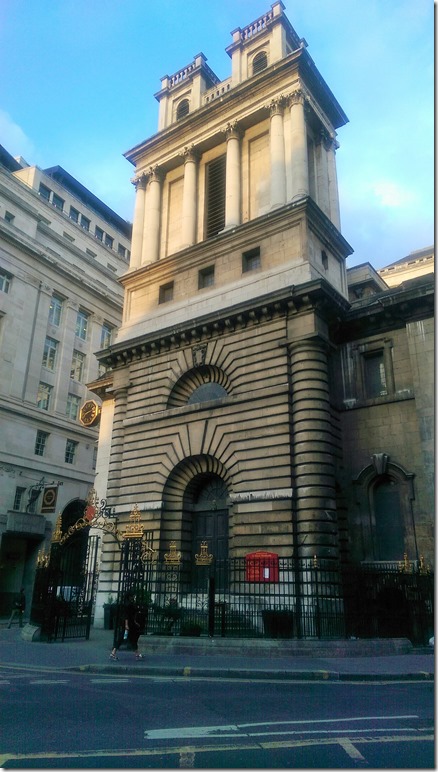 So now I’ve managed to see all six of Hawksmoor’s churches. But I’ve now found out that he also designed the tower to St Luke’s on Old Street. So I guess I’ll have to go and take a look the next time I’m down there!

Bank Underground station, built in 1897-8, is directly underneath the church.

My mission to visit the Hawksmoor churches in London continues!

Coming out of Aldgate East tube station before visiting the Hannah Höch at the Whitechapel Gallery I could see a church spire protruding above the roofline in the distance. I knew that Hawksmoor’s Christ Church, Spitalfields was not far away. So after I’d finished looking round the exhibition, as I had a couple of hours to spare before my train was due to leave Euston station, I decided to walk the short distance to take a look at the church.

It was dark by now, but the facade was lit up. 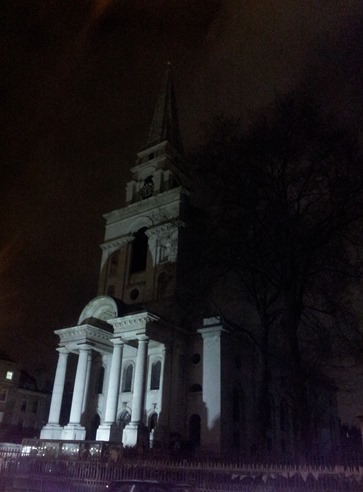 The lighting, which left the spire and sides in shadow, gave the church something of a ghostly look. I couldn’t help but remember that Hawksmoor has been linked with mysterious practices and is sometimes known as the “Devil’s Architect”

I thought it was an impressive building. Less quirky than the other examples of his work that I’ve seen. It’s dominated, as is usually the case with Hawksmoor’s churches, by the tall tower with it’s spire., and also by the porico – eight large Tuscan columns supporting a semi-circular pediment.

By the time I arrived the church was closed. I’d have like to have had a look inside. I’ll have to save that for another day.

Only one more Hawksmoor church to go now. Something for my next visit to London.

After we’d finished our tour of the Cutty Sark, we wandered along the Thames the short distance to the watergate at the front of the Old Royal Naval College at Greenwich. Originally the buildings housed the Royal Hospital for Seamen which was established  in 1694 "for the relief and support of seamen and their dependants”. The Hospital closed in 1869 and in 1873 was taken over by the Royal Navy as a training college. The College closed in 1998 an today the site is largely occupied by the University of Greenwich.

The buildings were designed in English Baroque style by some of England’s greatest architects from the late 17th and early 18th Centuries – including Christopher Wren, Nicholas Hawksmoor, John Vanbrugh and James ‘Athenian’ Stuart. The foundation stone was laid on 30th June 1696 and construction completed in 1751, although the first residents moved in to what was still a building site in 1705.

The dominant features  are the two domes, designed by Wren and which look like miniature versions of the great Dome of St Paul’s Cathedral.  The left hand dome (when viewed from the river) has a clock while the other has a clock like face that indicates the wind direction.

While we were wandering around the site I noticed that people were going in and out of doors just below the domes, so we thought we’d investigate.  Walking up the steps and through the door under the right hand dome revealed an unexpected sight – a large hall with the walls and ceiling completely covered with murals. This was “The Painted Hall”.

The term “breathtaking” is a much overused cliché, but it’s the best way to describe the impact the room had on me when I walked through the door.

The wall and ceiling decorations, which are intended to pay tribute to British maritime power, cover 2612 square metres and were painted by an artist I’d never heard of before, James Thornhill . The hall was originally designed as the dining room for the Hospital’s residents, but very quickly it was decided it was “too good” for these retired seamen and became an early tourist attraction with visitors charged to enter and look at the murals.

As is often the case photographs don’t really do justice to the room and the sense of being immersed inside one giant painting.

The art isn’t really to my taste, but I had to admire the grandeur of the work and it certainly made an impact. 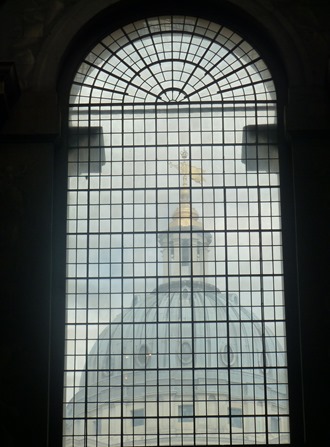 So afterwards what next? Well the obvious thing to do was to cross the courtyard and take a look at what was under the other dome.

After walking through a relatively plain entrance hall we were greeted by another sumptuously decorated hall, in this case the St Peter and St Paul Chapel.

According to the Old Royal Naval College (ORNC) website the Chapel

was constructed by Thomas Ripley to the designs of Sir Christopher Wren, was the last major part of the Royal Hospital for Seamen to be built. Following a disastrous fire in 1779, it was redecorated by James ‘Athenian’ Stuart in the Greek revival style,

The Chapel ceiling was designed by the master plasterer John Papworth in a neo-classical design of squares and octagons. The intricate central ornaments were carved, rather than cast in moulds. It is plastered in light blue and cream following a Wedgewood-inspired colour scheme.

In the entrance hall there’s a memorial to the men and officers of the Franklin exhibition of 1845 who lost their lives searching for the “North West passage” through the ice of the Arctic. 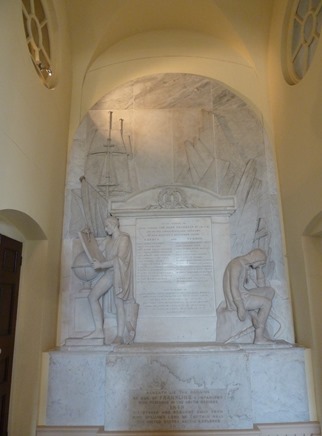 Guides to the Painted Hall and the Chapel can be downloaded from the ORNC website.

St Alfege’s church stands in the centre of Greenwich, not far from the Cutty Sark and the old Naval College. It was the first of the six London churches designed by the English Baroque architect, Nicholas Hawksmoor, who had worked with Christopher Wren and John Vanbrugh. His churches generally combine Gothic and Classical features, usually with an eccentric twist.

The current church is the third on this site. The second collapsed in 1710. The current building was begun in 1712, and consecrated in1718. It’s essentially neo-Classical with rounded windows, Doric columns and pilasters, architrave with a frieze decorated with triglyphs and a triangular pediment (look at me trying to use architectural terms!).

One departure from Classical orthodoxy is the round arch that penetrates the architrave and the pediment on the front of the building. 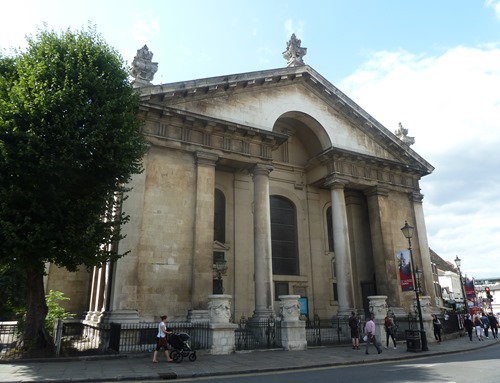 The tower wasn’t designed by Hawksmoor. The medieval tower from the previous church was retained to save money. However it was modified in 1730 by another architect, John James who had it refaced  and added the spire.

Hawksmoor’s design, published in an engraving in 1714 had an octagonal lantern at the top, a design he used on a later church, St George in the East, over the river in Wapping.

There’s a nice sketch of the spire of St Alfege’s here on a blog that also has some sketches of other Hawksmoor churches.

Unfortunately, we didn’t manage to get a look inside as the church was closed. But here’s a picture from Wikipedia.

On our way back on the Docklands Light Railway, changing lines at Westferry I spotted the tower of another Hawksmoor church, St Anne’s, Limehouse.

If we’d have had time, I would have wandered over to take a proper look, but that will have to wait until another occasion. Visiting Hawksmoor’s churches is one of the items on my “bucket list”.

When I was over in London earlier in the year, I had a look at an exhibition of photographs and models of the Hawksmoor churches, “Nicholas Hawksmoor: Methodical Imaginings” showing at Somerset House. It closes on 1 September, but there are reviews of the exhibition here and here.