This amazing Art Nouveau building is at the bottom of Broad Strret in the old city area of Bristol. Set back from the road and behind the line of the adjacent buildings you don’t notice it until you’re right on top of you, but when we caught sight of it we couldn’t help but stop in our tracks to take a look.

It was built in 1900 as the main works for the printer Edward Everard.. It was designed by a local architect, Henry Williams, and the tiled facade, made from ‘Carraraware” *, was created by W.J. Neatby, Chief Designer for Doulton and Co.

Half way up the facade there are representations of Gutenberg and William Morris, both working at their presses, standing on either side and looking inwards towards an angelic Spirit of Literature. Behind each is a typeface which he designed. The company’s name is spelled out in letters designed by Everard himself, 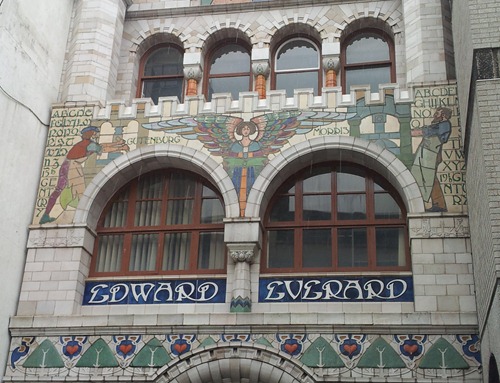 At the top in the pediment there’s a female figure representing Light and Truth. The tiles are arranged so they radiate out from the figure like the rays of the sun.

Art Nouveau was very much a continental movement, and classic AN style buildings are few and far between in Britain. This is a beautiful example. Although most the building was demolished in 1970, thankfully the marvellous facade was preserved.

*Carrara ware was the trade name for a glazed stoneware, single fired to a matt (often white) finish, developed by Doulton’s of Lambeth during the late 1880s and used from 1888 in architectural work; it was produced until 1939. (Source here)