The Crawford Gallery is Cork’s public art Gallery. The main part of the building, built in 1724, was originally the Cork Customs House. Emmet Place, where it’s located, today is a wide street but used to be a harbour off the north channel of the River Lee. The gallery was extended in  2000, substantially increasing the exhibition space.

I visited it twice during my short stay in Cork – in the daytime and then during Thursday evening when it’s open until 8 o’clock.

They have a decent collection of paintings but not on the scale of the public galleries in Manchester, Liverpool and Leeds.

Outside  I spotted this Banksy style stencil on the wall outside.

Inside, on the main staircase there was an attractive, contemporary stained glass work in the window.

Unfortunately I didn’t make a note of the artist’s name.

At the top of the stairs there was a sculpture by the Northern Irish artist, F. E McWilliam depicting a woman blown over by an explosion during “the Troubles”

I normally associate McWilliam with abstract works, but this is very realistic. A little research revealed that this work

is the last and largest sculpture from a series called Women of Belfast which, he explained, ‘was concerned with violence, with one particular aspect, bomb-blast – the woman as victim of man’s stupidity’. Although they can be read as a metaphor for women affected by violence, these sculptures were McWilliam’s response to the Provisional IRA bombing of the Abercorn Restaurant in the centre of Belfast on 4 March 1972. The bomb exploded in the restaurant which was packed with Saturday afternoon shoppers, killing two women and injuring some 70 other people.

The Gallery’s collection spans the centuries from the 16th Century onwards. I particularly liked the exhibition of works by Irish artists from the AlB Art Collection which was donated to the Irish State in February 2012 and will become part of the Crawford Art Gallery’s permanent collection. These were some of my favourites

A Place With Stones (1979) by Patrick Collins

The gallery also has a collection of watercolours, ink drawings and stained glass by Harry Clarke whose marvellous stained glass windows I saw in the Honan Chapel a mile or so away.

Clarke may be described as Ireland’s major Symbolist artist, whose synthesis of literary, musical, poetic and imagined visual images draws on a wide range of eclectic, sometimes obscure sources to produce an entirely original and idiosyncratic vision. This is as firmly rooted in the Yeatsian Celtic Revival and National Romanticism of late 19th/early 20th century Ireland as in European Symbolism, Decadence, and Art Nouveau of the same period, with the unusual extra dimension of consummate technical skill in stained glass.

Most of the earlier works on show and the temporary exhibitions didn’t particularly interest me, each to his own, and I didn’t intend to look around the large room full of casts of Classical Graeco-Roman sculpture. But on my second visit on my way out I popped into the sculpture gallery which is to one side of the entrance. I’m glad I did because tucked away on the wall in the corner was a large painting by Hughie O’Donoghue.

After looking round the Lewis Glucksman Gallery, I decided to explore the UCC campus. The grounds are open to the public and there’s even a visitor centre where I was able to pick up a small booklet about the college and its buildings.

University College Cork (UCC) was established in 1845 as one of three Queen’s Colleges – at Cork, Galway and Belfast – to provide access to higher education in the Irish province of Munster. Today it’s part of the National University of Ireland (NUI).  Probably the most famous person associated with the College was George Boole, the inventor of Boolean logic, who was Professor of Mathematics between 1849 and 1864.

The campus is located on the edge of a picturesque limestone bluff overlooking the River Lee associated with the local early Christian saint, Finbarr and UCC’s motto is ‘Where Finbarr Taught, let Munster Learn.’

The limestone buildings of the Main Quadrangle were designed by the architectural partnership of Thomas Deane and Benjamin Woodward. A neo-Gothic complex as  his was considered the most suitable style for colleges at that time, being inspired by the great medieval colleges in England.

The Visitor Centre can be found here as well as the Stone Gallery which contains an exhibition called ‘Stories in Stone’ featuring a series of Ogham Stones which are inscribed with an ancient Celtic script. Written in a series of carved lines, the collection dates back as far as the 5th to 7th centuries AD.

The Crawford Observatory  was opened in 1880 and named after William Horatio Crawford, a local brewer and merchant. it was restored and re-opened in 2006

This modern building is the Áras na Mac Léinn  – the Student Centre.

The President’s Garden, which lies between the east wing of he Quadrangle building and the Student Centre, was originally reserved for the exclusive use of the College President and his guests.

Officially outside the college grounds, but adjacent to the Student Centre, is the Honan Chapel. But this building deserves a post of its own. 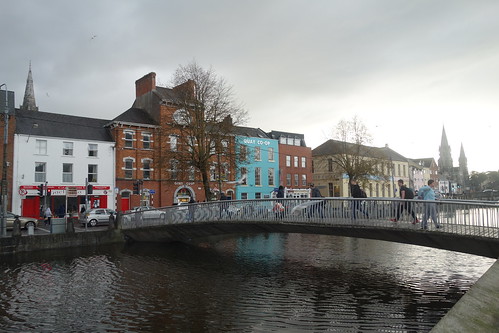 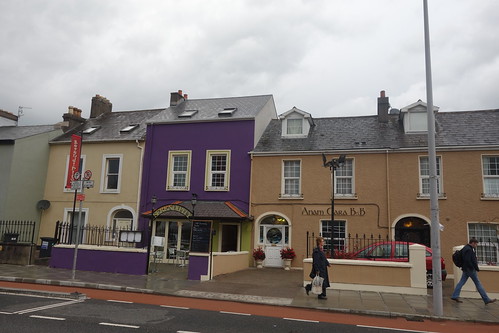 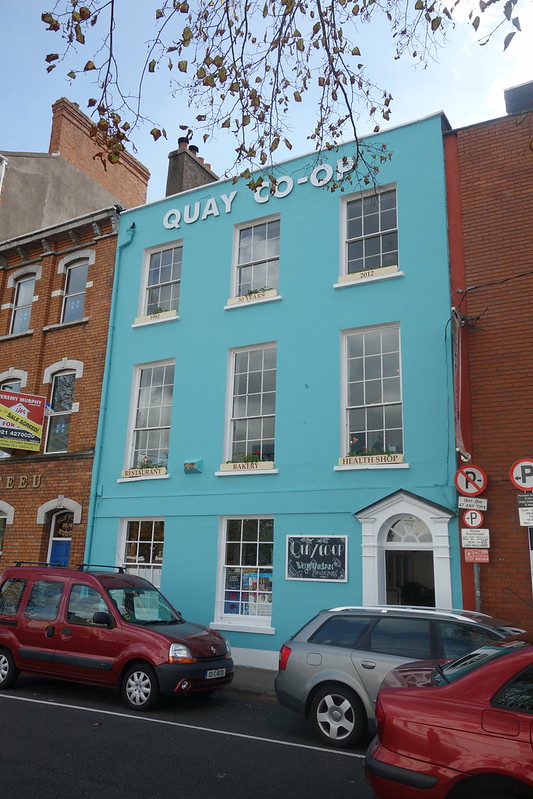 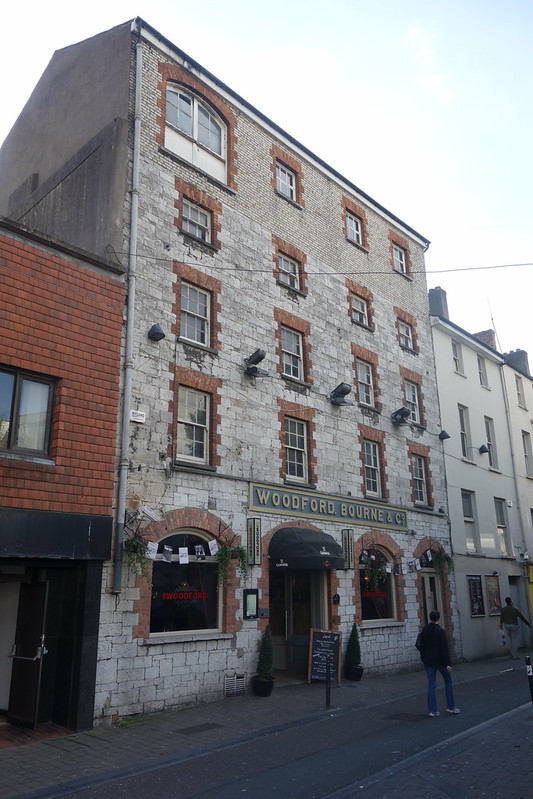 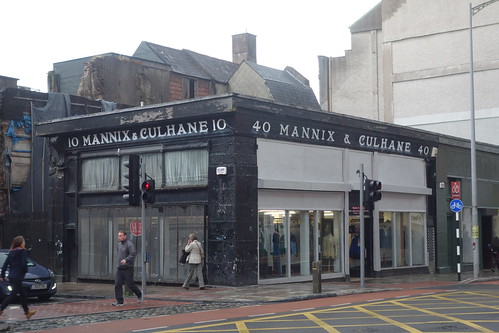 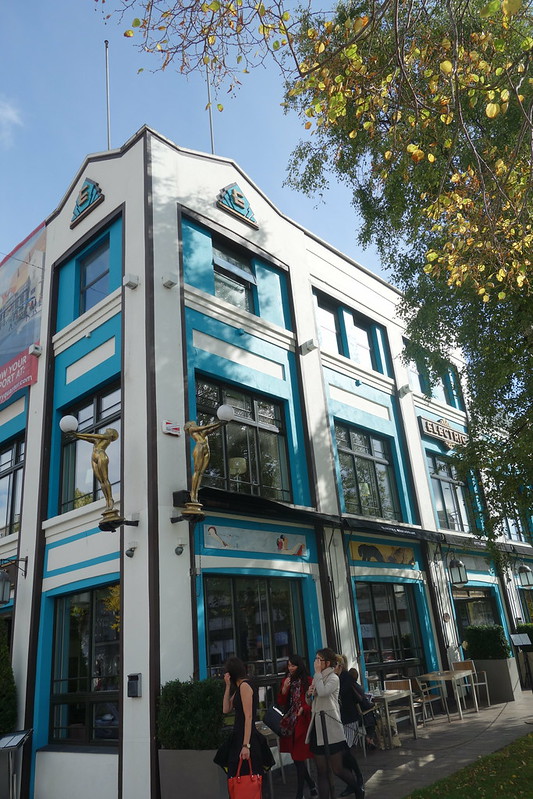 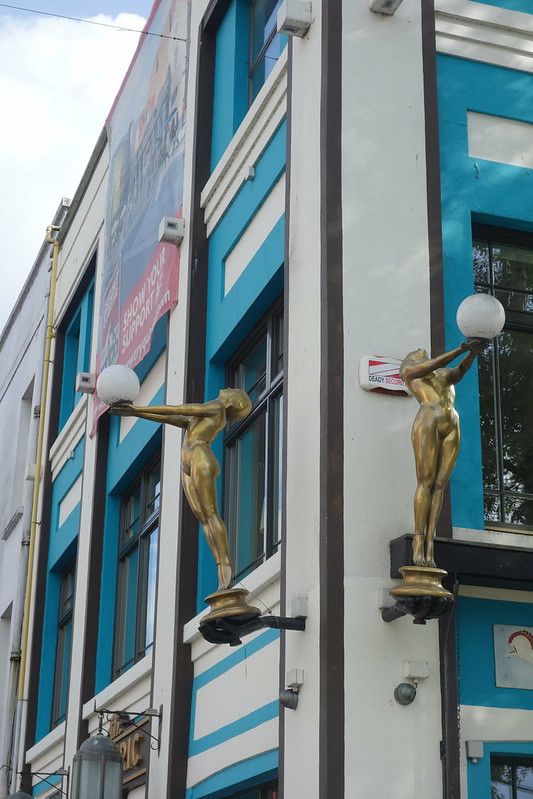 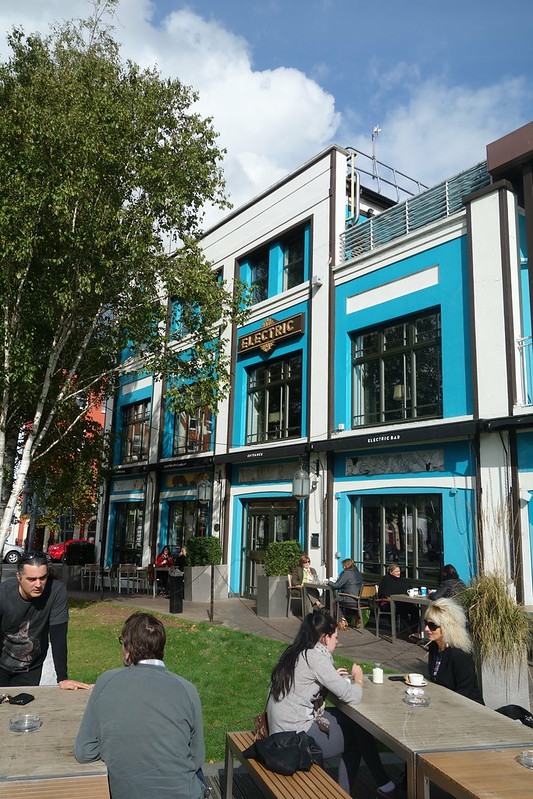 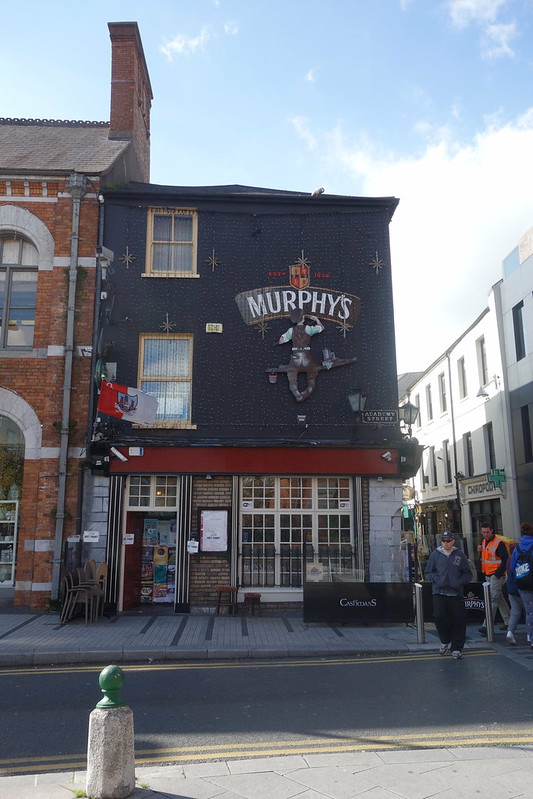 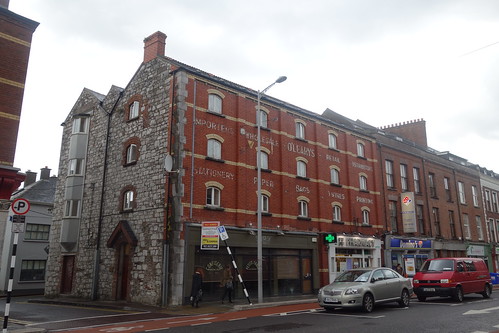 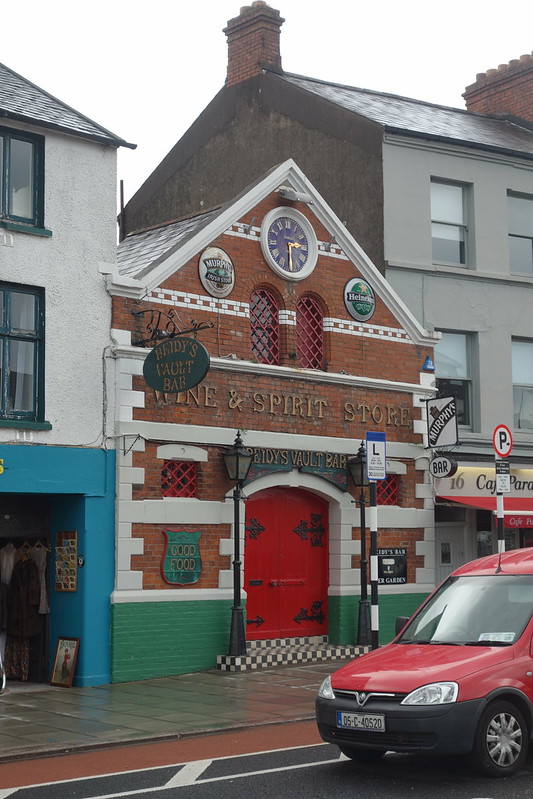 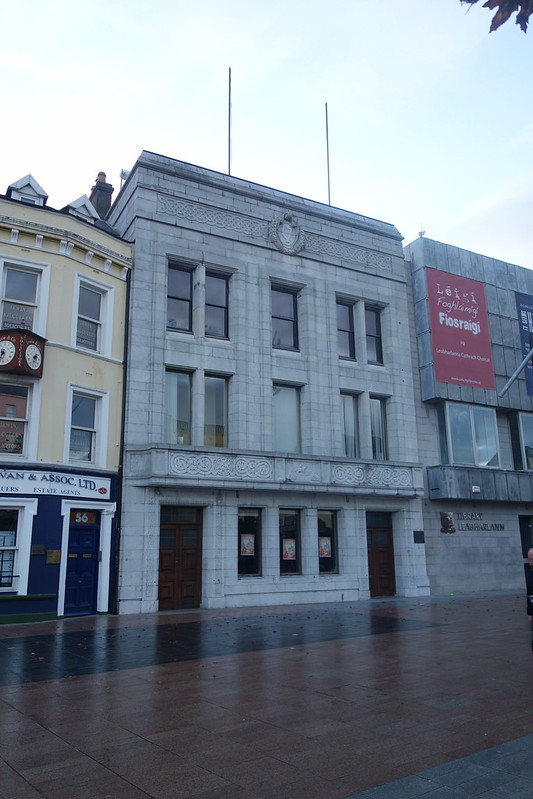 There were plenty of interesting older style buildings in the centre of Cork, but nothing in the way of Modern architecture. However, I’d heard that there was an example of a modern building – an art gallery – on the University campus, a 20 or 30 or minute to the west of the town centre along the south branch of the River Lee. So after walking round the city centre I decided to set out and wander over for a look.

I wasn’t disappointed. It was worth the walk- indeed there was a lot to interest me on the University campus – a post or two to follow.

The Lewis Glucksman Gallery, stands on the river side, just inside the main entrance of the University. It’s named in honour of Dr Lewis Glucksman who the Gallery website as

The architects were Sheila O’Donnell and John Tuomey of the Irish firm O’Donnell+Tuomey, which they established in 1988.

Entrance is through the podium which is at street level. As the street is raised above the level of the river there’s a storey underneath which accommodates a restaurant.

The base of the building is a concrete structure clad with limestone with galvanised steel windows. The gallery spaces are clad in timber (Angelim de Campagna, a sustainably sourced hardwood), which, according to the architects

is intended to be understood as a wooden vessel which resonates with its woodland site.

The timber clad section is supported on a concrete ‘table’ structure cantilevered from columns. The concrete was sandblasted to reveal reflective mica in the surface of the structure. There are galvanised steel bay windows projecting from the structure, allowing light to enter the galleries.

The architects tell us that

The intention is that the natural finish materials (sawn limestone, galvanised steel and untreated timber) should age and weather into the landscape.

Inside, the gallery spaces are accessed by wooden staircases

With white walls and large windows, the gallery spaces are very bright and airy

The building is set in a very pleasant green space with a large lawn at river level and is surrounded by mature trees.

Amongst awards it has received it was the RIAI Best Public Building in Ireland 2005, the RIBA 2005  European category award winner and was shortlisted for the 2005 Stirling Prize.

I thought it was an exceptional building, that fulfilled it’s function well and looked beautiful, and which both complemented it’s surroundings and was enhanced by its setting.

Last week I went over to Cork for a conference. As usual with my trips with work I try to find some time to look around and managed to spend an afternoon and an evening looking around the city.

It’s quite a small city and easy enough to get around to see the main sites on foot. The main city centre lies on an island between the north and south branches of the river Lee and in Shandon to the north of the Lee. The University campus to the west of the city centre is also worth a visit (worth it’s own post). I managed to see quite a lot in the short time I was there, but there was more to see. And there are places to visit in the vicinity, so Cork could be the base for a short break.

Here’s some of the photos I took around the city centre.

On the south branch of the Lee

The same view later in he day

The Crawford Art Gallery – formerly the Custom House. The wide street it stands on used to be a dock.

Monument to Rory Gallagher, the great blues guitarist born in Cork in the square named in his honour

Rainbow over the City Hall

Another shot of the city hall in the evening