The Monday of our holiday I set off for a more ambitious solo walk along the ridge of fells on the west side of Derwent Water and a little further along Borrowdale. The promised heavy rain arrived a little later than forecast on Sunday and continued into Monday morning so I hung around for a while, took the dog for “walkies” and set off around midday. 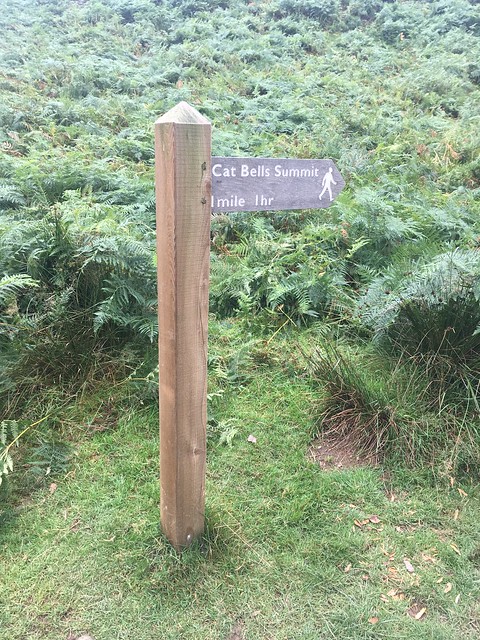 I took the path to Hawes End and then started the steep climb up to the first, lower, summit of Catbells. It’s a relatively small fell (shaped like a mountain but not high enough to be counted as one) which dominates the skyline on the west shore of Derwent Water. It’s a popular climb and one extolled by Alfred Wainwright for the variety of the climb and the views. In his guide to the North Western Fells he tells us

Catbells is one of the great favourites, a family fell where grandmothers and infants can climb the heights together, a place beloved. It’s popularity is well deserved: it’s shapely topknot attracts the eye, offering a steep but obviously simple scramble to the small summit. 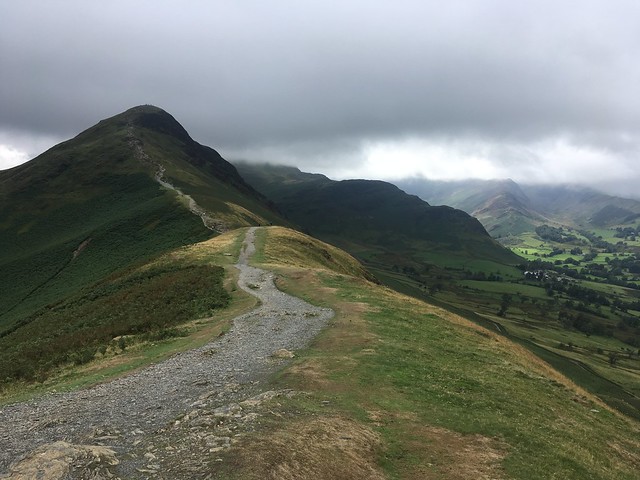 Looking over the Newlands valley as I climbed 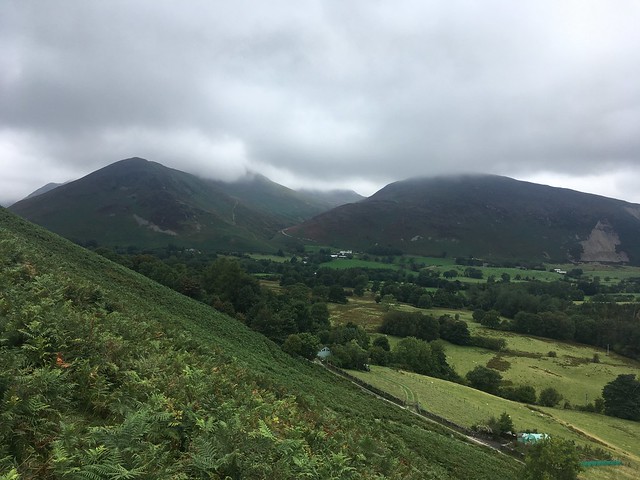 and back down over Derwent Water 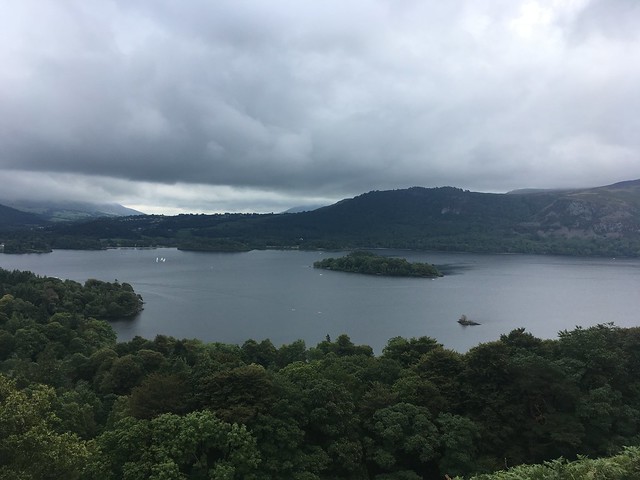 Given it’s proximity to Keswick (it can be reached easily by taking the launch to Hawse End) there’s always plenty of people making the way to the top and today was no different. This was the third time I’d climbed it myself. It’s a mile to the main summit and although it’s quite steep and there are a couple of sections where there’s a short scramble up bare rock it’s not too difficult. 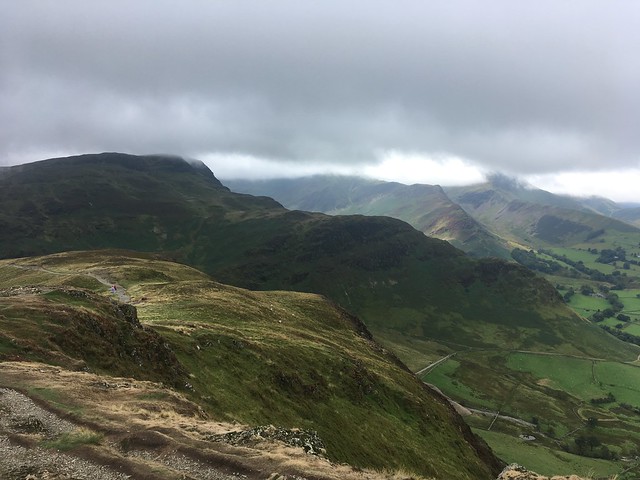 It was crowded at the summit when I reached it. Most people would be making there way back down but my plan was to carry on along the ridge as far as High Spy. I stopped for a bite to eat, taking in the views and people watching before continuing on, dipping down to the Hause and then climbing up to the next fell, Maiden Moor. It’s an easier climb than Catbells, the path being a little more gradual and less scrambling. It’s a broad moor rather than a rocky peak and there’s no clearly defined summit. 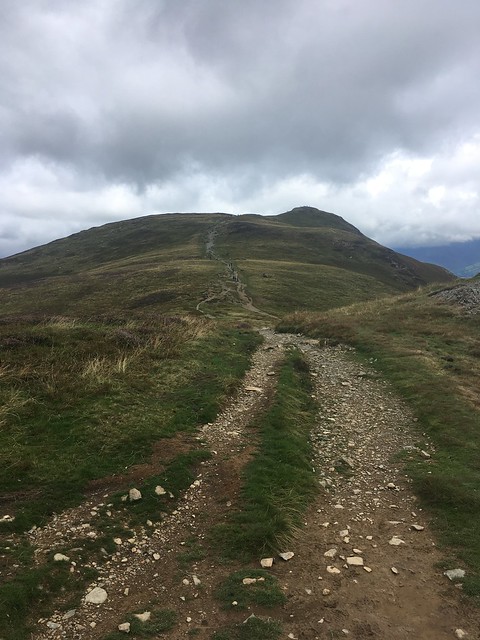 On the way up I was surprised to see a JCB working on path improvement. The operator told me that they’d driven it up the hill! Took 3 days, apparently! 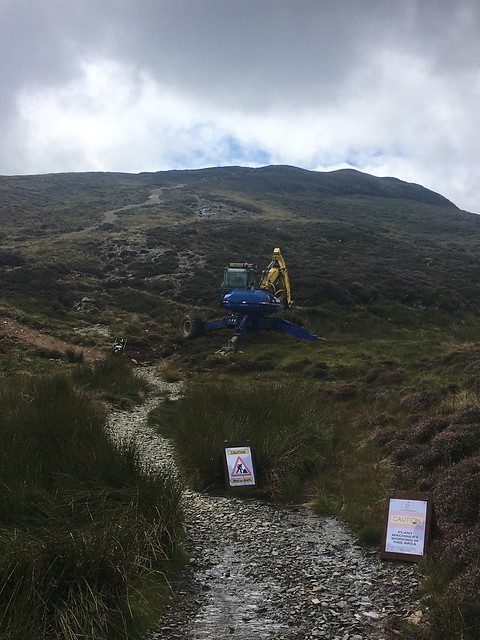 Looking down over Borrowdale 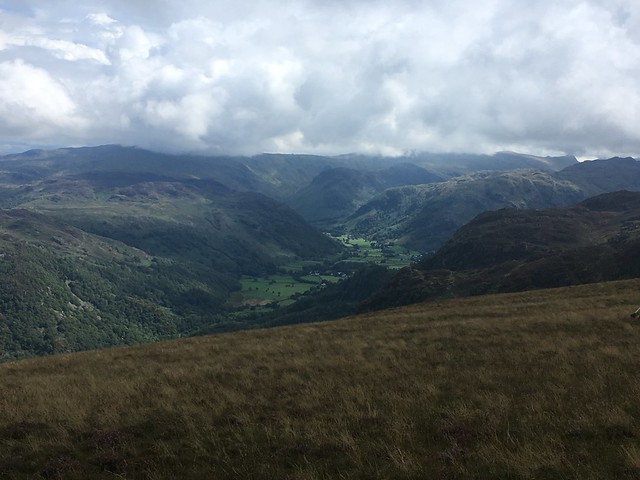 I carried on along the ridge passing Blea Cragg making my way to the summit of High Spy. On the way I was caught by a fellow walker a couple of times. In both cases they slowed down to match my pace for a while for a chat before speeding back on along the ridge. They were both quite a bit younger than me! One of them was from Kashmir – he was studying for a PhD – and as he’s grown up in the foothills of the Himalayas it was interesting to hear his view of our modest mountains. 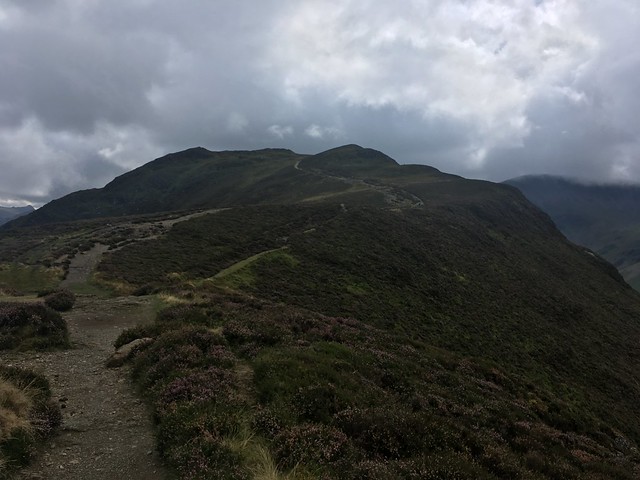 I reached the summit of High Spy and stopped to take in the view and grab another bite to eat.

A couple of views from the summit 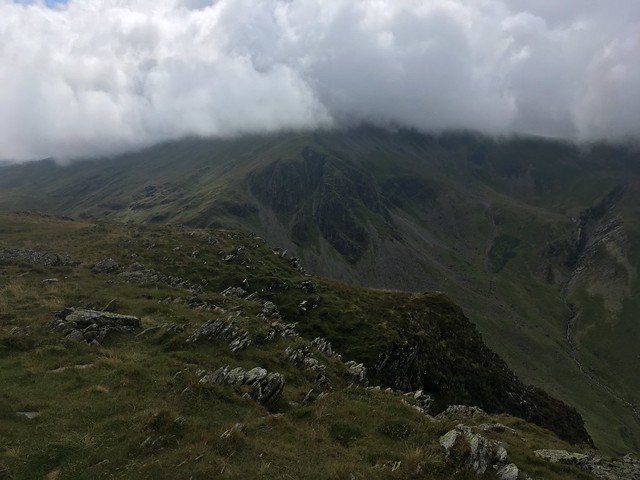 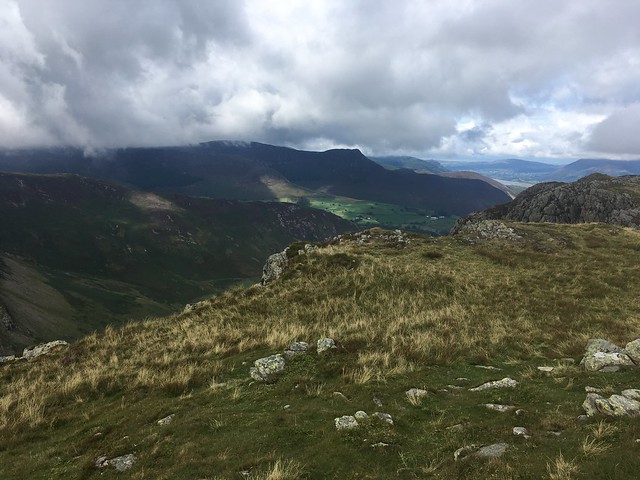 I had a decision to make now. The ridge forms part of a horseshow with Dale Head at (as the name implies) the head of the Newlands valley with two other ridges – Hyndscarth and Robinson – across to the west. I could have continued round and made my way back along either fell, descending into the Newlands Valley. But I’d set out late and supplies were low (being diabetic I have to keep topping up with carbohydrates during walks) so I decided to save that for another, longer day and turned round to retrace my steps.

I diverted to Blea Cragg. This isn’t counted as a “proper” fell in it’s own right, but part of High Spy. But it’s a great viewpoint with vistas back towards Derwent Water and along the Borrowdale valley and the high peaks.

Returning to the main path I followed the ridge along Maiden Moor and descended down to the hause. 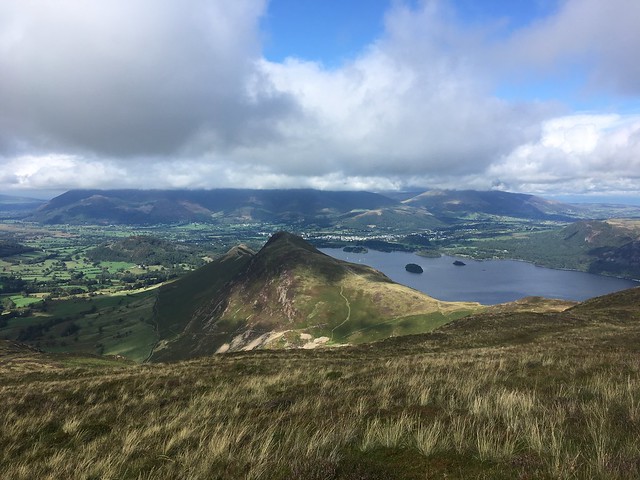 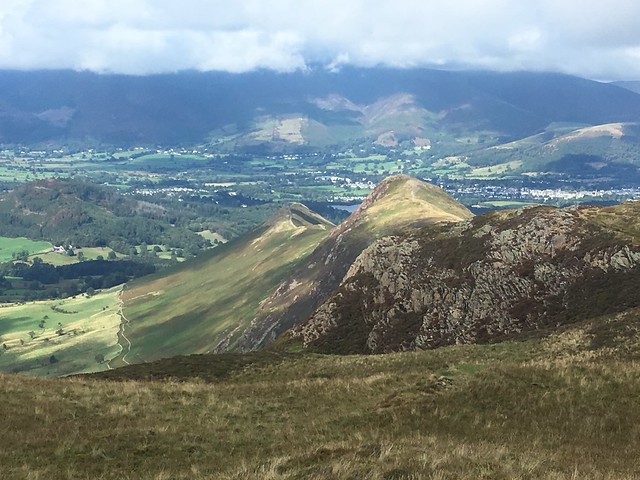 Rather than carry on back over Catbells, I took the path that descended into the Newlands Valley and then traversed along the bottom of the ridge back to Hawse End. 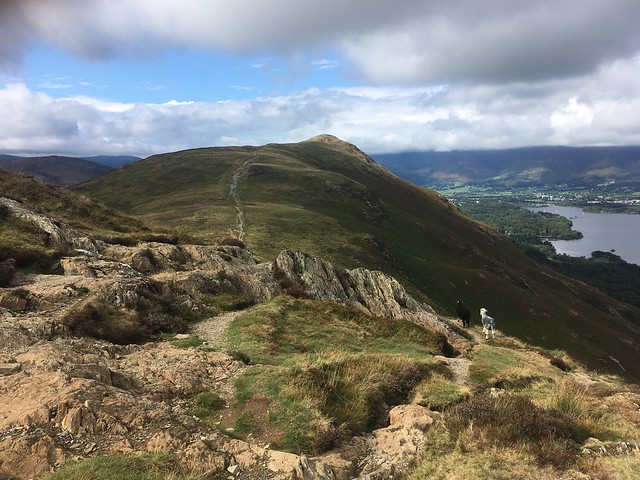 The views to the east 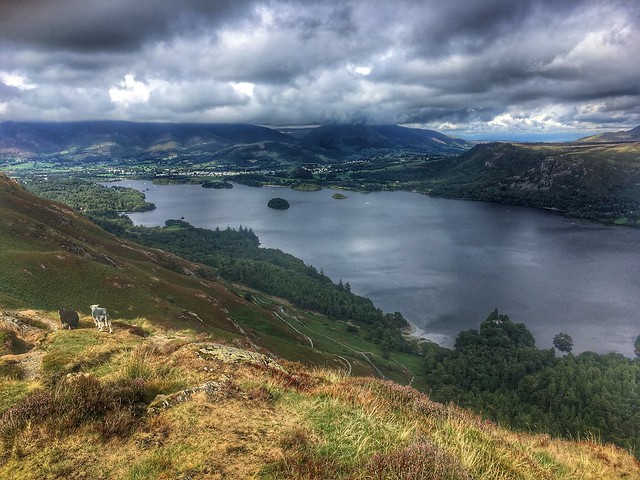 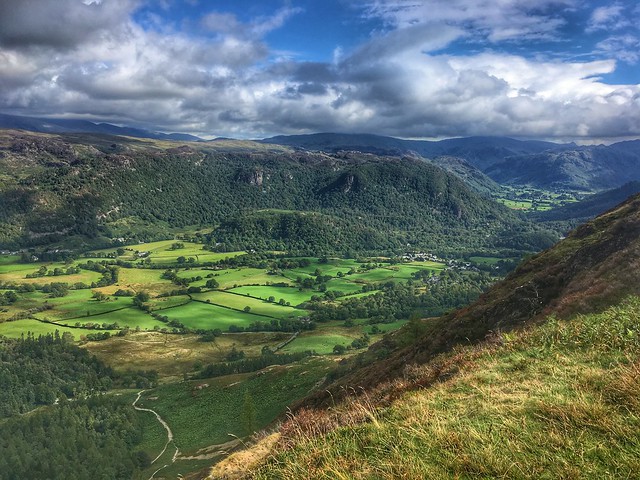 There were great views across the valley to the high fells including Causey Pike, although Grisedale Pike was hidden under a blanket of cloud. 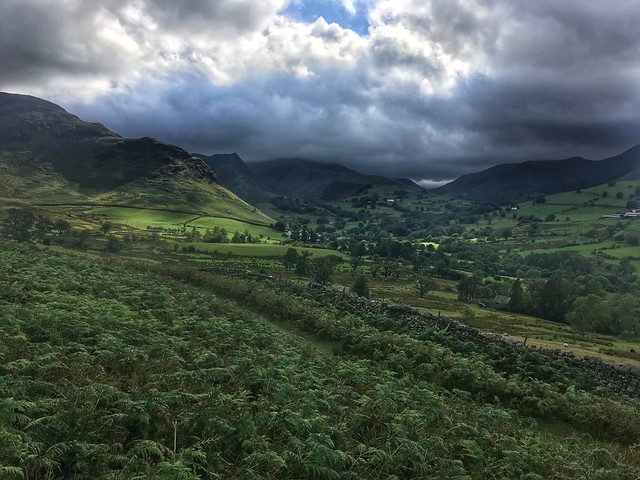 Looking back to the head of the valley 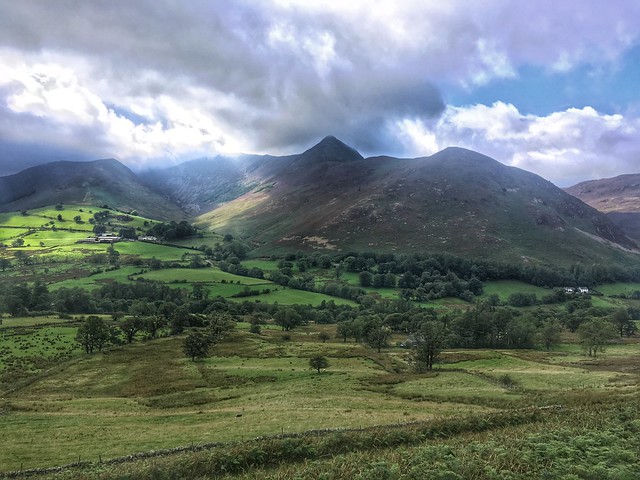 and down the valley with Bassenthwaite Lake in the distance 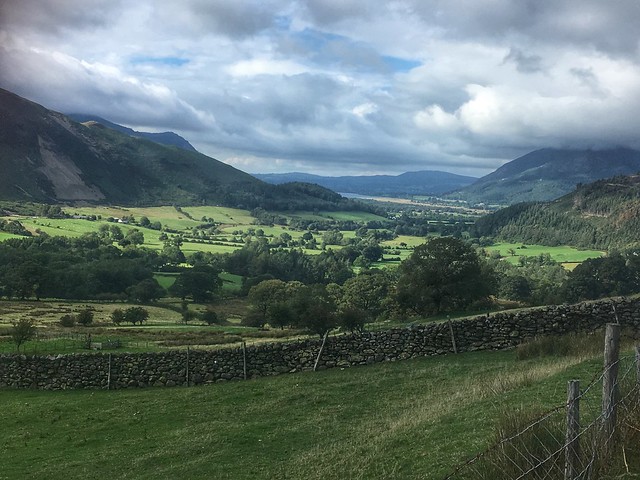 Reaching the bottom of the climb up Catbells, I retraced my steps from the morning back to Portiscale, making a short diversion to watch the launch pulling in at Nichol End. 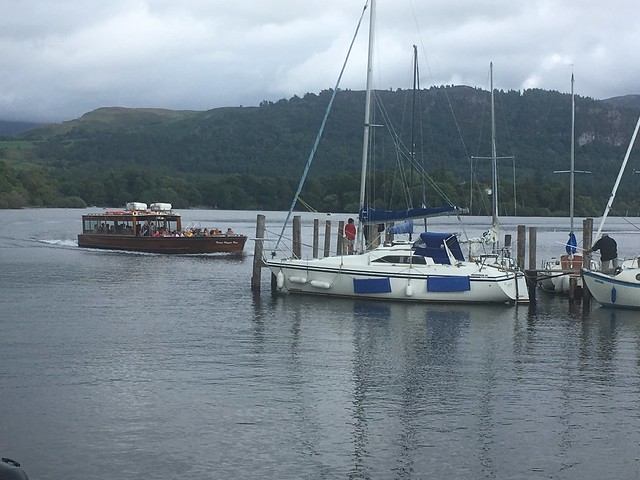 Arriving back at the apartment it was time for a brew. I think I’d earned it!

We arrived in Keswick a little before midday. As we had tickets for the theatre and had a table booked at Morrell’s restaurant for a pre-theatre meal and needed to check into our B and B   before then, we decided to start our break with a modest walk up Walla Crag.

We set out from the car park by Derwent Water, cutting through town and then down Springs Road toward the woods and the path towards the fells.

Climbing up the fell, views of the surrounding countryside opened up.

Looking back towards Keswick with Skiddaw towering over the town

The Summit of Bleaberry Fell, about a mile away, looked tempting

descending via the very steep path down Cat Gill

We followed the footpath along the lake back towards  Keswick.

We cam across this sculpture on the lake shore in Calfclose bay. The Centenay Stone is a work by Peter Randall-Page, created from a large boulder of local Borrowdale volcanic rock which was split and carved by the artist to commemorate the National Trust’s centenary in 1995.

Looking towards Keswick from Cat Bells

Waiting for the Ferry

The weather forecase yesterday was pretty good, so I took another day off work and headed up tot he Lake District. We parked up in the car park by the lakeside at Keswick and took the launch over Derwent Water to Low Brandleow where we started the ascent up Cat Bells.  Unfortunately as we only arrived midday and the launch was running on the winter timetable we only had enough time to get up to the first summit before we had to turn back so we could catch the last launch back to Keswick to retrieve the car. Nevertheless the climb was worth it for the views even if we didn’t make it all the way to the top.

Afterwards we had a wander round Keswick and had a coffee beore driving down towards Windermere past Helvelyn, Thirlmere and Grasmere.  We stopped off in Ambleside where we found a really good Italian restaurant (Dodds on Rydal Road) where we ate. The menu was more imaginative than the usual fare and the food delicious and good value – highly recommended. We had a wander round the town before heading back home.