I took the train into Manchester on Saturday – the main reason being that I’d decided to look for some new walking boots. It was a fine sunny, day and after alighting at Salford Central train station and walking up to Deansgate, I stopped to take a few snaps of the Trinity Bridge, a footbridge that crosses the River Irwell connecting the “twin cities” of Salford and Manchester.

It was designed by the architect, structural engineer and artist, Santiago Calatrava.- it’s his only bridge in the UK – and was opened in 1995. 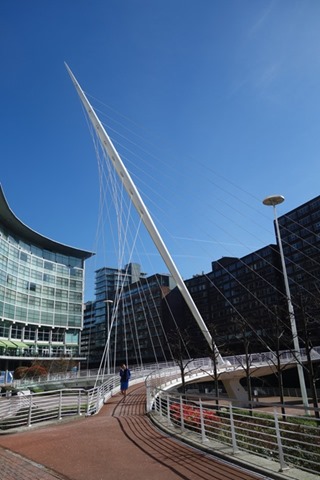 It’s a cable-stay design with a 41-meter cigar shaped pylon, angled towards Salford, with the cables attached asymmetrically to form a cris-cross effect– rather reminding me of a “Spirograph” pattern.

It’s difficult to take a photo that properly shows the design. On the Salford side there are three ramps, two of which curve in from either side, combining at the pylon  to form the deck across the river. The Manchester bank of the Irwell is higher than on the Salford side so the bridge slopes up to meet the bank. 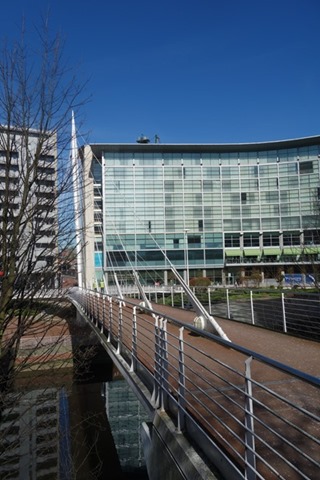 It’s a radical design and there have been some problems with maintenance but there is no doubt that it’s an attractive landmark structure.

The bridge over the River Derwent on the Chatsworth Estate.

This attractive, dramatic structure is one of the newest bridges over the River Liffey in Dublin. It’s located at the east end of the city, connecting the quays north and south of the river near the docks. I pass it every time I drive to and from Dublin port during my fairly regular trips to Ireland. During my visit this week I went into Dublin on Tuesday after work to watch a play at the Abbey Theatre. After braving some horrendous traffic along the quays I arrived with an hour to spare. It was a lovely evening and so having been stuck in the car for over an hour I decided to take a walk along the quays to stretch my legs. I snapped this photograph from another modern bridge, the Sean O’Casey footbridge.

Opened on December 10th 2009, the bridge was designed by the Spanish architect, structural engineer and artist, Santiago Calatrava. It’s a cable stay structure, designed to rotate ninety degrees to free the river channel for water transport crossing the river.

The shape of the main span was inspired by the harp, the Irish national symbol. And with the 31 cable stays it supports, I can certainly see the resemblance when viewed from a distance,

Calatrava has designed bridges for cities all over the word, including one in Manchester. I’ll have to go and have a closer look at it sometime. 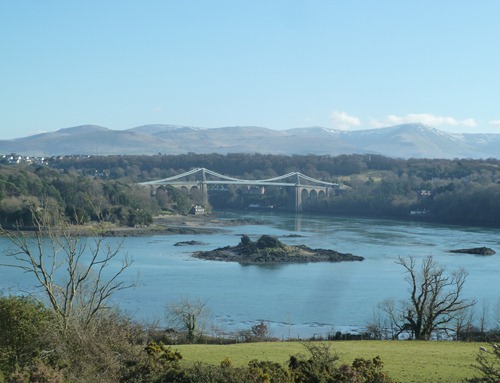 On Sunday, before I set out to catch the ferry from Holyhead to Dublin, I got a text message before I set off to tell me it was running late. Despite this, they still wanted passengers to check in at the normal time, so I had to set out as normal. However, as I was driving through North Wales, as I was making good time I took a small diversion and drove over Thomas Telford’s old suspension bridge over the Menai Straights and stopped for a few minutes to take a few snapshots.

Thomas Telford was a leading engineer during the early part of the 19th Century and he was commissioned to make improvements to the main route from London to Holyhead to improve access to the port, which was a major point of departure for Dublin, as it remains today, in fact. The route, which is now the A5, had to cross the notoriously dangerous waters of the Menai Straights to access the island of Anglesey (Welsh name, Ynys Môn) from the Welsh mainland. Prior to this the straights had to be crossed by ferry – although some brave souls would wade across with their cattle at low tide.

Work on the bridge started in 1819, and it was and opened on 30th Jan 1826. It spans the straights at their narrowest point. At the time it was built, it was the biggest suspension bridge in the world. The deck, which is 579 long, is suported by sixteen massive wrought iron chains (they were subsequently replaced by steel chains in 1938) which themselves are supported by the two towers constructed from Penmon limestone. The deck is 100 feet above the high water level, which was specified at the time so that Royal Navy tall ships could sail underneath.

It is certainly a beautiful structure. There’s a smaller version of the same design by Telford in Conway, beside the castle. It’s owned today by the National Trust and only accessible by foot, but I’m sure I can remember driving over it when I was a young teenager on my way to Scout camp further down the coast. You can just make out one of the towers and sections of the chain in front of the castle on the following picture

The main route to Holyhead A55 crosses the Menai Straights to Anglesey via the Britannia bridge that was designed by Robert Stephenson and opened on the 5th March 1850. originally a railway bridge, it had to be rebuilt after a major fire in the 1970’s and now has a road bridge over the top of the tunnel that carries the railway line. . It was revolutionary for it’s time too and, again, there is a mini version in Conwy (the railway bridge). But it isn’t as attractive as the original suspension bridge especially as it was reconstructed as major structural alterations were made to permit the road deck to be built . It’s nowhere near as picturesque as Telford’s bridge. 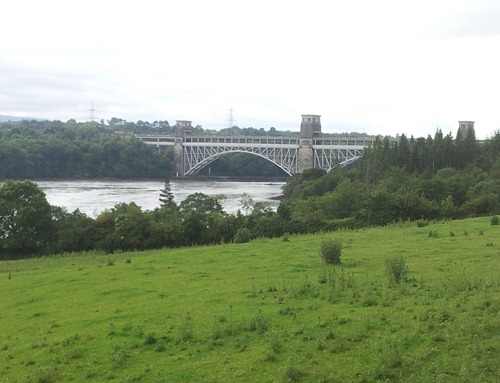 The arches underneath the were added during the reconstruction to support the additional weight.