Artists tend to be solitary creatures but, in reality, many works of art require collaboration and team work. The named artist has the inspiration and designs the work, but often they are supported by “assistants” and others to create the work. This is certainly the case with sculptures where larger works would remain as ideas or small maquettes without the support of assistants (usually skilled artists themselves) and,  artisan craftsmen (e.g. specialist foundries). These people who are vital to the creation of the work remain anonymous wile the headline artist laps up the fame and glory. The Boyle Family are an exception to this in that they really are a family – parents and children – who work as a collective. Their website gives details on how this evolved. They are particularly well known for their recreations of random squares of ground, realistically recreated from fibreglass together with sand, stones, bits of metal and other objects representative of the setting. Abbot Hall are currently showing a selection of their works in the exhibition – Boyle Family: Contemporary Archaeology. The main focus of the exhibition are works created for The World Series Lazio Site, from 2013, the most recent of their on-going World Series project. It includes

earth studies, electron microphotographs and video that provide a compelling and arresting visual record of the surface of the land, the plant life, insect life and the presence of the artists themselves. Accompanying this work will be earth studies from the previous decade, including the first public showing of their Coral Quarry Triptych from 2001-2

Their landscape works are incredible in the detail and look so real. Looking at the comments in the guest book for the exhibition it’s quite clear that I’m not the only person who wants to touch them (forbidden, of course!). This is a reproduction of a rusting metal plate

and this is an example of one of their works featuring a section of beach. 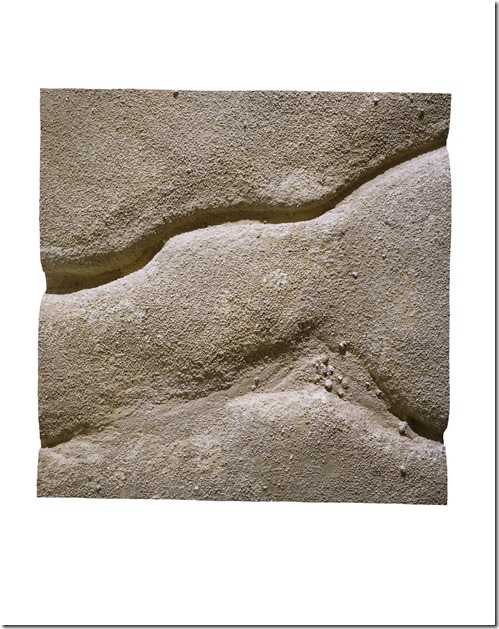 There’s a tremendous amount of detail too which illustrates just how much we don’t “see” when we look at the ground. Taken in isolation and divorced from their location and environment we can really start to observe how much there is to see. These works are realistic  – but taken out of their environmental context they’re like abstract patterns. Their work concentrates on the landscape,but not just that of the Earth. They also explore the biological landscape – plants, animals and humans. To do this they use electron micrographs – massively enlarged pictures of insects, plants and human hairs and cells that reveal complex and interesting forms and patterns otherwise invisible to the human eye. There were some examples in the exhibition. I found them fascinating – like their geographical works they are, to me, at the interface of art and science. Given my scientific education, work and interests in both of CP Snow’s “two cultures”. CA full “catalogue” of the works shown from the Lazio site can be viewed here. There was a documentary showing on a loop. It provided good background and context to their work and was well worth watching. Mark Boyle, the father, who died in 2005, was certainly a character. I couldn’t find a copy online but di locate a short video from their exhibition at the Scottish National Gallery of Modern Art in 2010. Part of the TateShots Edinburgh Special, August 2010. 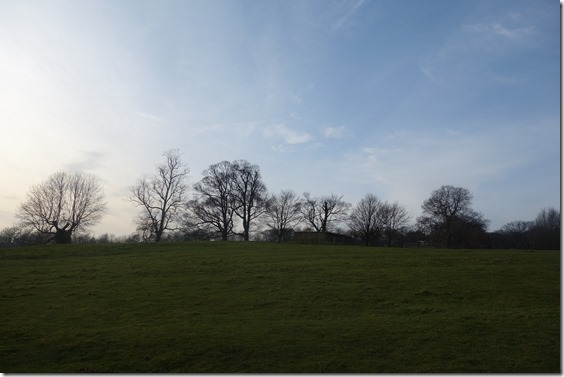 It turned out to be a fine winter’s afternoon on Saturday. So after we’d had a look at the Song for Coal in the Chapel we decided to take a stroll through the grounds.

Looking back up he hill

We headed towards the old bridge and crossed the river

At the other side of the bridge, we looked over towards the weir

Looking west, this was the view over the Lower Lake.

We decided to walk along the north shore of the lake a we hadn’t taken that rote during recent visits. Some new art works had been installed during the last couple of years including a couple of works by David Nash.

This is Black Mound, a circular group of charred wooden stumps, increasing in height towards the centre of the piece forming a pyramid like structure 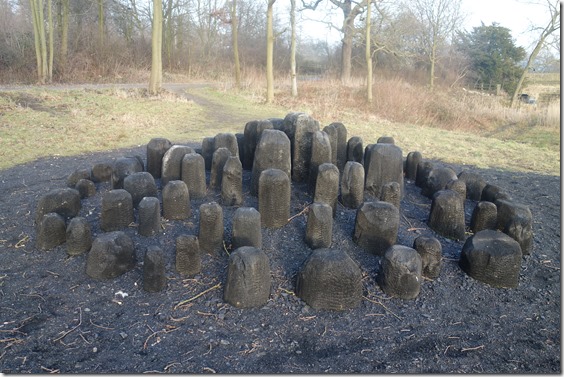 It’s one of his “growing works” like his well known Ash Dome. The saplings – Himalayan Birch – are arranged in a square pattern and over time they will grow and the work will change and evolve.

The winter sun created interesting light effects over the lake 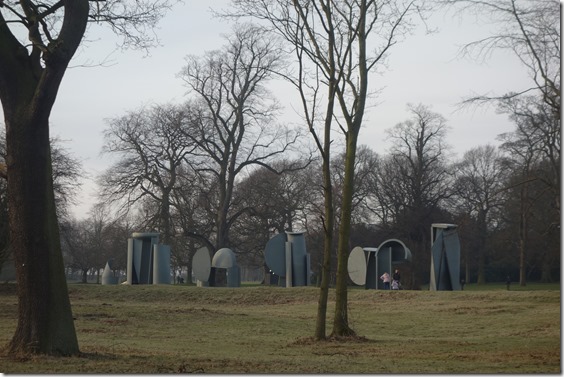 Looking back along the Lake

Towards the western end of the lake we passed another work we hadn’t seen during previous visits, Woodland Spirit – Diana (1913) by Lucy and Jorge Orta

Diana, formely known as Ubelka, the ancient name of the river Huveaune and a water goddess, was renamed by Orta in 2014 to reflect her current location at YSP. Diana Beaumont lived on YSP’s Bretton Estate from the late 1700s until her death in 1831 and was instrumental in landscaping the lakes and gardens.

The sculpture’s new name also references the Roman goddess of the hunt, wild animals and woodland, who was believed to have the power to talk to and control animals. This and Diana’s position surveying YSP’s 18th century designed landscape, alludes to the complex relationship between humans and nature.

A flock of geese flew along the Lake

Looking over the field towards Bretton Hall

At the end of the lake we could see the work – One and Other – by Anthony Gormley silhouetted against the blue winter sky. A cast of his body perched on top of a tree trunk like a totem pole.

The Frequency of Trees comprises a series of 14 tuning forks tuned to the frequency of different trees within YSP: oak, horse chestnut, beech and the cedar of Lebanon in the Formal Garden.

We were able to strike the tuning forks and listen to the different frequencies produced.

Sound often features in Caroline Locke’s work. in July 2012 she had a residency at the Chapel at the YSP with her work Sound Fountains

Sound Fountains pass sound waves through water, allowing the viewer to ‘see’ sound. Throughout the installation visitors were able to trigger different sound sequences via motion sensors connected to the fountains, build soundscapes and explore waveforms on the water’s surface.

Pity we missed that. I think I would have found it very interesting.

The next work we passed was Monolithe (1986) by Lambert Rocourt 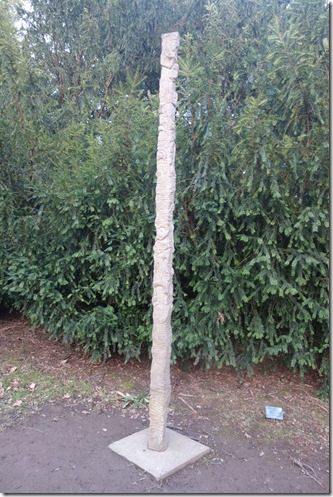 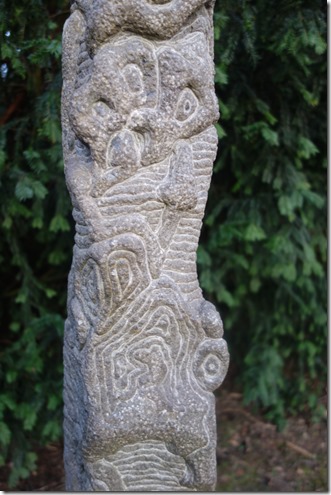 I’ve never been able to take a photograph that can do it justice. Its setting on th ehill amongst the trees really enhances this iconic work. 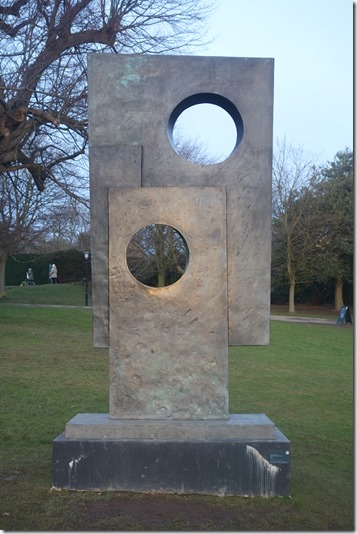 We walked past the Underground Gallery, which was closed as they are between exhibitions, and strolled around the upper lawn 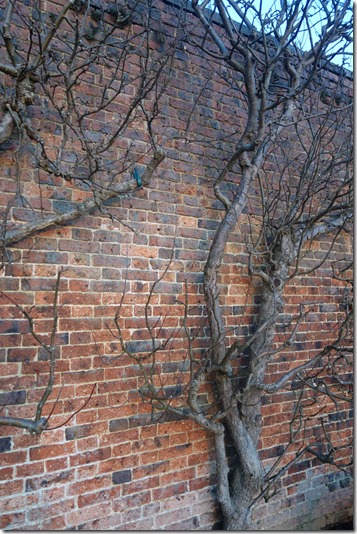 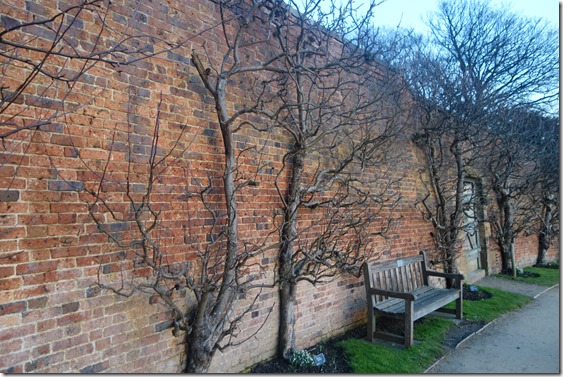 Time to go home, but driving towards the exit we stopped to look at this work by Jaume Plensa, illuminated with changing colours 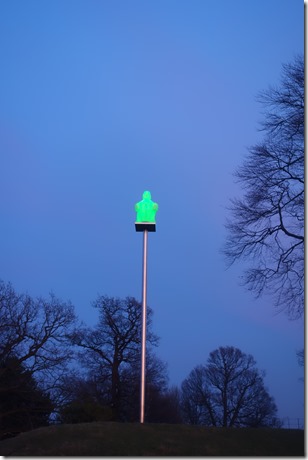 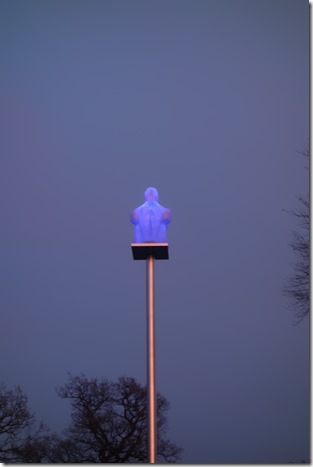 A final look back towards a dramatic sky 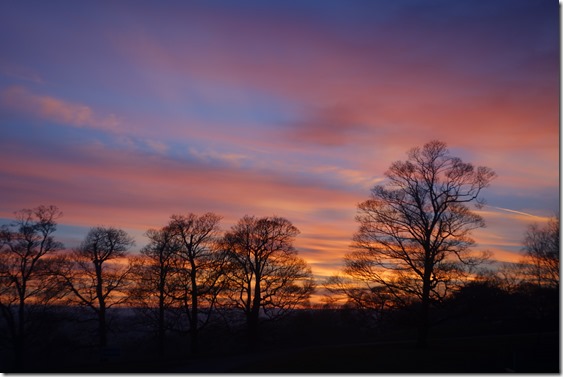 before heading back towards the motorway and the drive home.

Last July, when we were on holiday in the Lake District, we visited and enjoyed an exhibition at Dove Cottage in Grasmere – The Walking Poets – inspired by William Wordsworth and the Japanese master of the Haiku, Basho. It featured older manuscripts books together with works by contemporary artists in various media.

Two of these artists were Richard Skelton and Autumn Richardson who are partners and collaborators, who both had two works included in the exhibition. I was intrigued by their work, which formed pictures from words –  and afterwards did a little research to find out more about them.

Richard Skelton, who originates from Standish, just up the road from here, is an artist, musician and writer and produces visual works formed from words and “found objects”.  Autumn Richardson is a Canadian poet who also produces visual works. Together they have produced ‘Field Notes’, a series of poetic place-studies published as pamphlets by their own Corbel Stone Press. They also edit and publish ‘Reliquiae’, an annual journal of poetry, short fiction, non-fiction, translations and visual art.

Some of Richards’s works were inspired by the West Lancashire Moors, specifically Anglezarke, very much my “stomping ground”, so I ended up buying, and enjoying a couple of his books. So I was particularly keen to see the exhibition of their works which extends across Blackwell and Abbot Hall and which opened recently.

Their work is ‘informed’ rather than ‘inspired’ by landscape. It is not impressionistic, but the result of extensive research into specific places, topographies, ecologies and histories. Pages from their book-works frequently spill with word-lists drawn from varied sources: pollen diagrams, dialect glossaries, cartographic records, archaeological tracts

The exhibition, features works inspired by their home in a remote part of south west Cumbria.  It includes

music, film, books, pamphlets, prints, artefacts and assemblages that engage with the natural history of this landscape, from the post-glacial wasteland to the present day.

So it’s a “multi-media” exhibition. Many of the works , in books and prints, are “poem-pictures” or “picture-poems” where the words and letters are arranged to create patterns and images that are representative of the theme of the poem. The visual work is often accompanied with a piece of music

Limnology, for example, which is displayed at Blackwell, a book accompanied by a print and music

The book assembles over 1000 ‘water-words’ from the dialect of Cumbria and its tributaries in the Germanic and Celtic languages, presenting them in a way which typographically imitates riverine processes.

Letters cascade down the page, overlap, merge and gather, forming pools and streams. Intermingled with these visual pieces are poems and texts which explore, among other things, water creation myths, the roles of water creatures, both real and imagined, and the paradox of waterless rivers.

At Abbot Hall “Relics” is a series of prints each one with an image formed by different words used for a specific tree arranged in a  circular pattern, like tree rings.

The work is inspired by the deforested landscape  around Devoke Water in south-west Cumbria where names related to the landscape refer to the names of the trees that were once there:

The artists have also collected various objects from the landscape – for example, fragments of bark, bone, twigs, leaves, seeds, pods, roots, animal pellets –  some of which are displayed in conjunction with their word works. 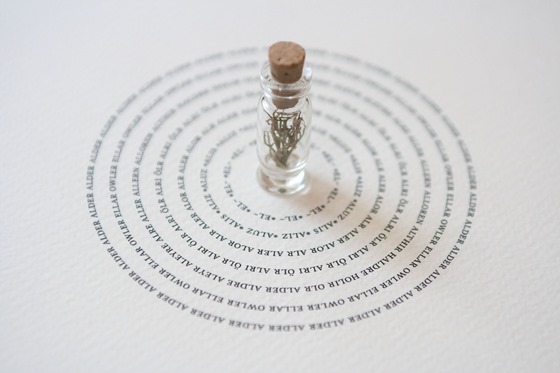 Richard Skelton was also given access to the collection of artefacts held by the Museum of Lakeland Life and Industry (Also run by the Lakeland Arts Trust). From this he created the ‘Museum of Ferae Naturae’, produced in collaboration with the Notional Research Group for Cultural Artefacts.

One of the rooms at Abbot Hall has been devoted to this exhibition.

The museum will explore the customary persecution and exploitation of animal life in Cumbria, offering alternate historic, mythic and folkloric contexts for these artefacts which imply different attitudes towards the natural world.

Carefully selected objects are displayed in glass cases together with related texts.

There’s a catalogue of the works on display at both locations together with photographs here.

I thought it was a marvellous exhibition, reinforcing my appreciation of the work of Richard Skelton and Autumn Richardson. There was too much to take in in one viewing so we intend to return, especially as there are other exhibitions at both locations we enjoyed and would like to see again – a display of pots by Emilie Taylor and two rooms devoted to work by the Boyle family “collective” whose art also is inspired by landscape – Boyle Family: Contemporary Archaeology – at Abbot Hall