A week last Sunday I fancied getting out to stretch my legs so headed up to the Lake District. At this time of the year the daylight hours are short so I wanted a route that would get me back to the car before darkness descended. I decided to drive up to Ambleside and walk up Scandale and then climb up Red Screes. It’s a route I’d done before and although not the most popular way up the mountain – most people seem to take the steep climb up from the Kirkstone Pass – I’d enjoyed the walk up the quiet valley. This time another solitary rambler was following the same route and we kept passing each other. We eventually walked together and chatted for a while, until I had to stop to top up my blood sugar.

I arrived around 8:30 and parked up in the main car park and booted up. There were quite a few other people also getting ready to head off onto the fells, either walking or cycling. I walked through the town centre and was soon setting off up the lane that led up Scandale Pass.

It was time to start making my way back to Ambleside down the long whale-back ridge of Red Screes. There were great views all the way as I descended.

I made my way down to the town centre and had a mooch around the shops picking up a few items in the sales before returning to my car.

Passing Bridge House on the way to the car park – it’s obligatory to take a photo!

I managed to find a day to get out for a walk and decided to drive up to the Ambleside and walk up Red Screes. It’s a distinctive fell and its whale-back can be seen from across the south Lakes. I had intended to do this walk a few months ago but changed my mind when I parked up in Ambleside and did the Fairfield Horseshoe instead. This time I stuck with my plan on what was forecast to be a fine Autumn day.

Leaving Ambleside I took the path along Scandale and then climbed to the summit of Red Screes from the top of the pass, descending back down to Ambleside along the ridge. An easy ascent up the valley followed by a steep climb and then a gentle descent.

Leaving the car park I passed the bridge house 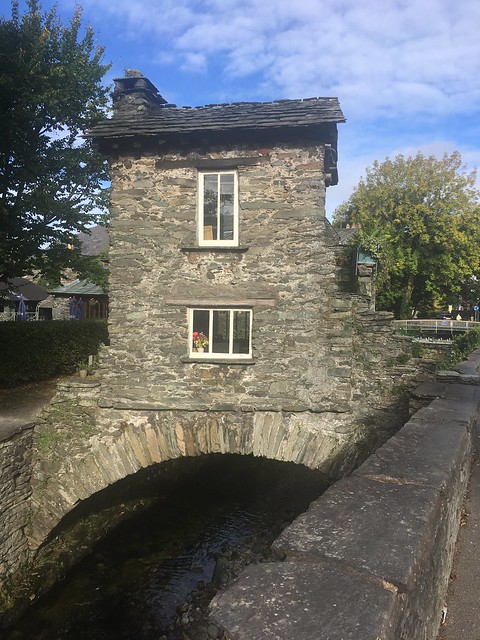 It was bright and sunny as I started to climb out of the town, with great views over to Rydal Water and the fells 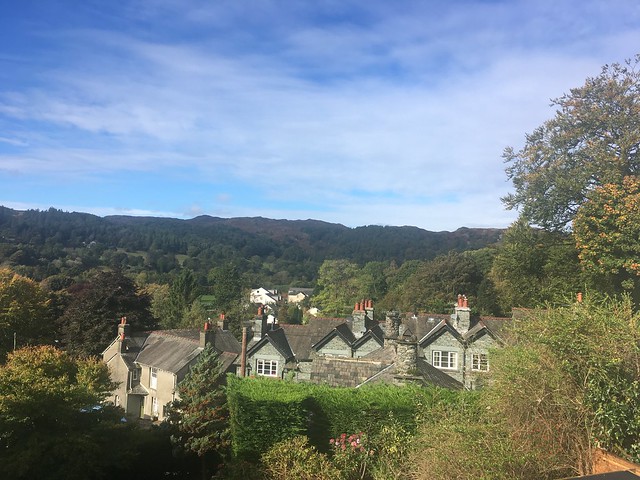 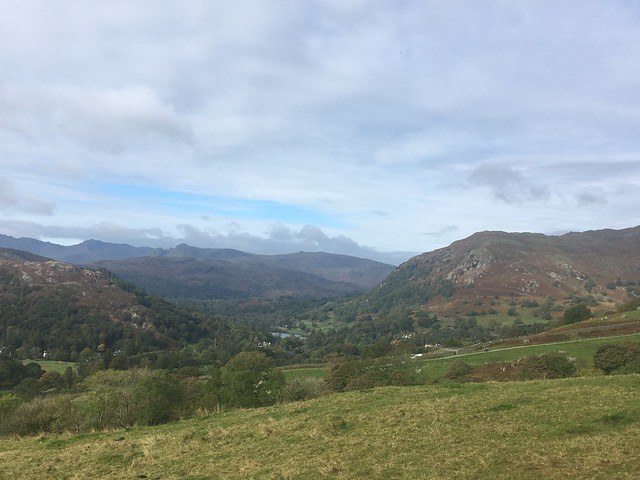 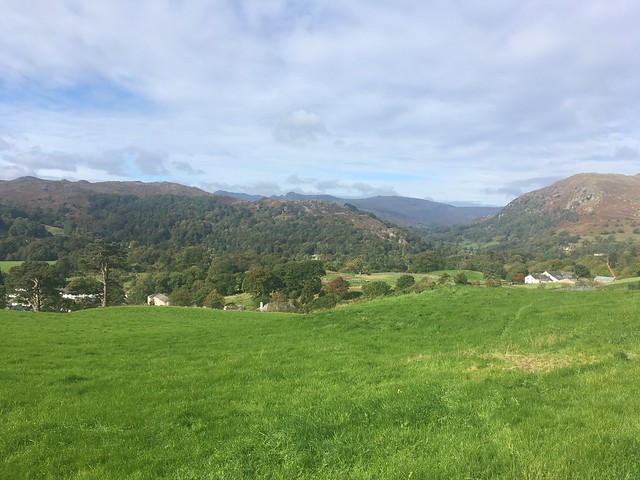 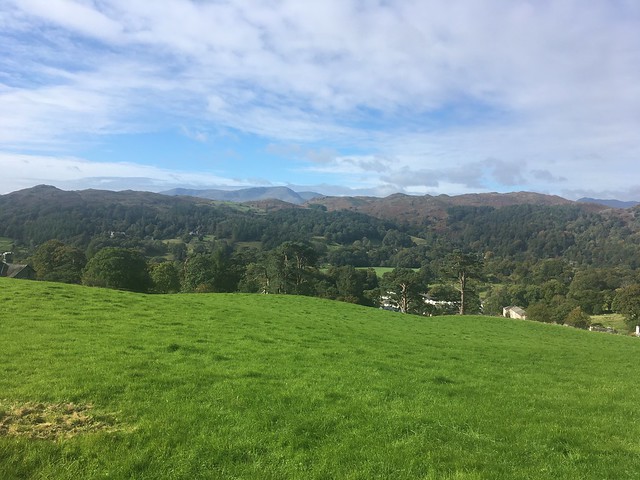 Up through the woods 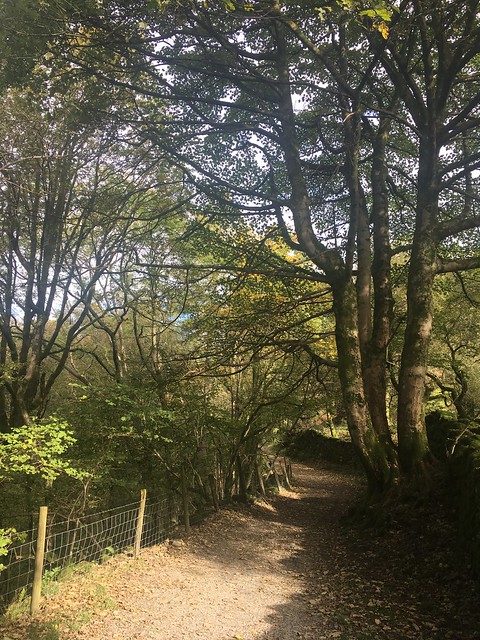 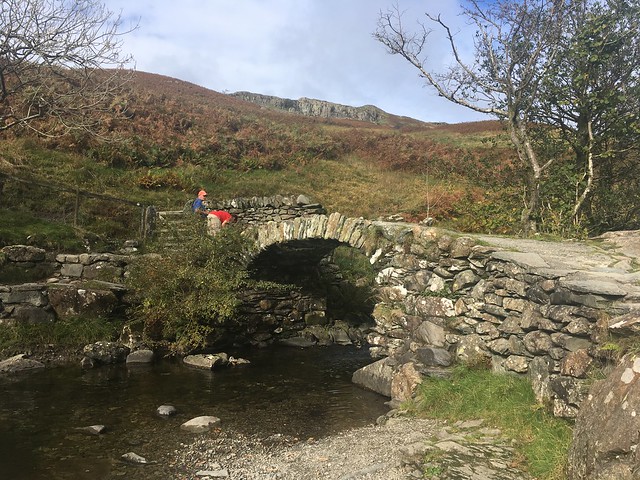 It’s an old packhorse bridge dating from the 1700’s.

I carried on up the valley. This route over the top of Scandale Pass links Ambleside with Patterdale. 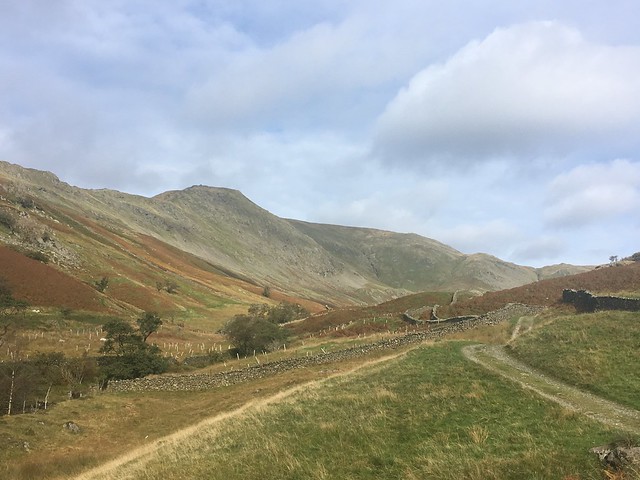 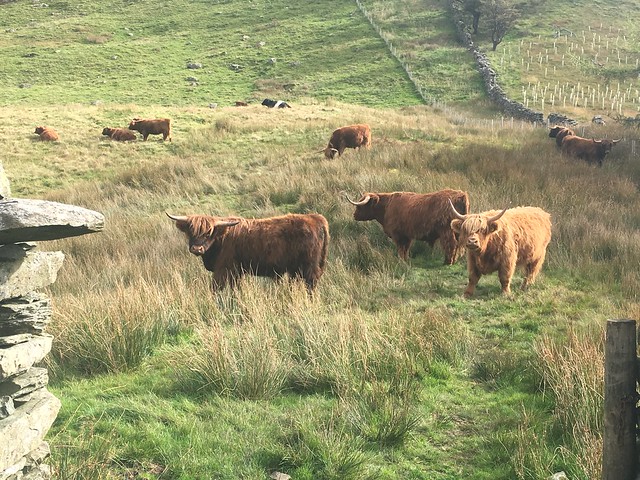 Carrying on along the valley; 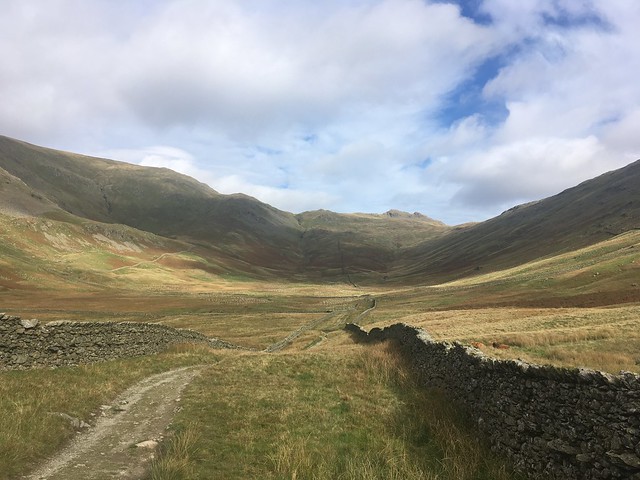 Reaching the top of the pass the sky had clouded over 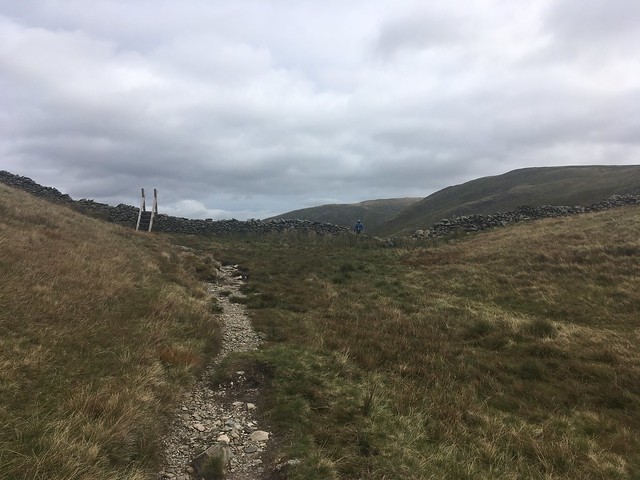 Looking down towards Patterdale and Brothers Water 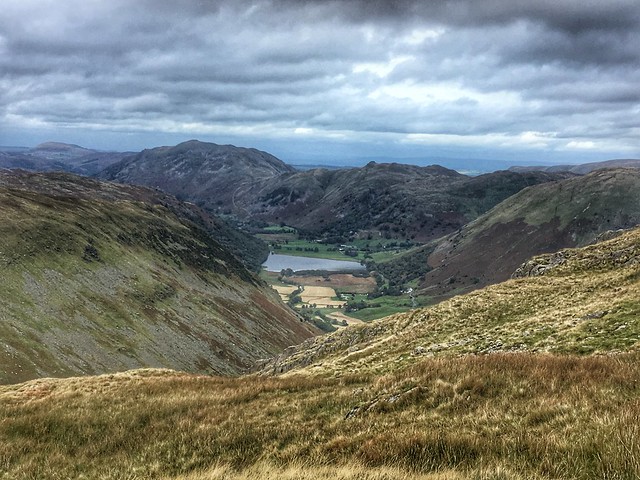 and over towards the Fairfield Horseshoe and Helvellyn 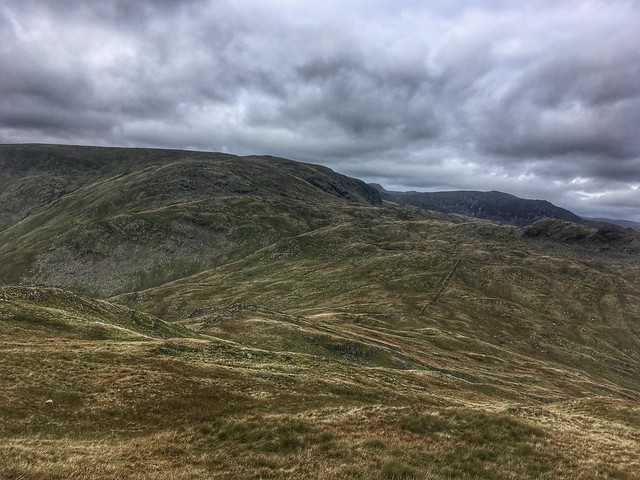 I finally reached the summit 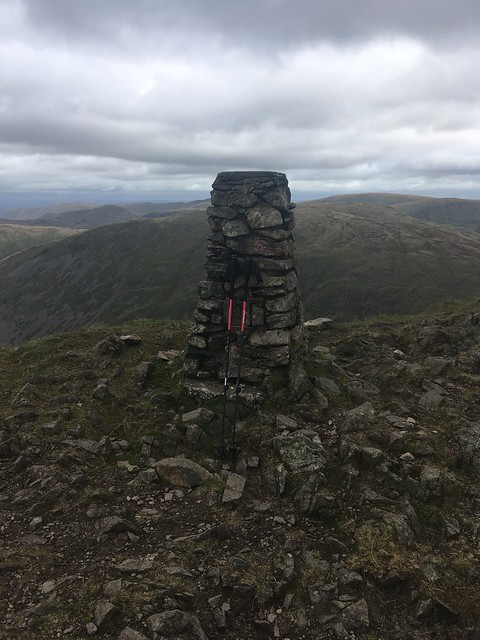 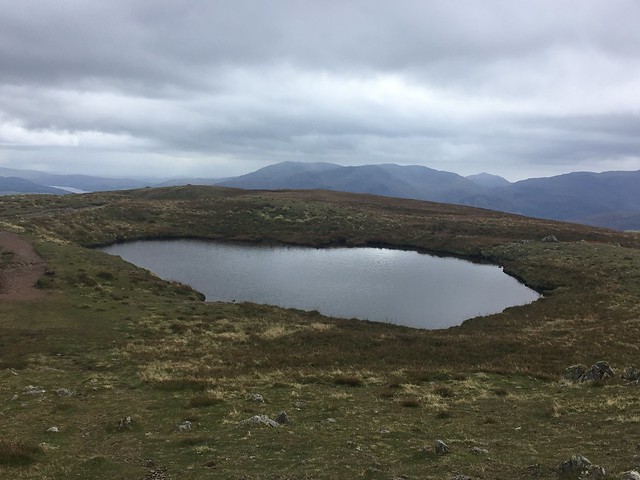 It was cold and windy and the wind shelter was occupied by someone wild camping. But I managed to find a sheltered spot to grab a bite to eat and take in the views.

Looking towards Yoke, Ill Bell and Frostwick and the Kentmere Horseshoe in the east 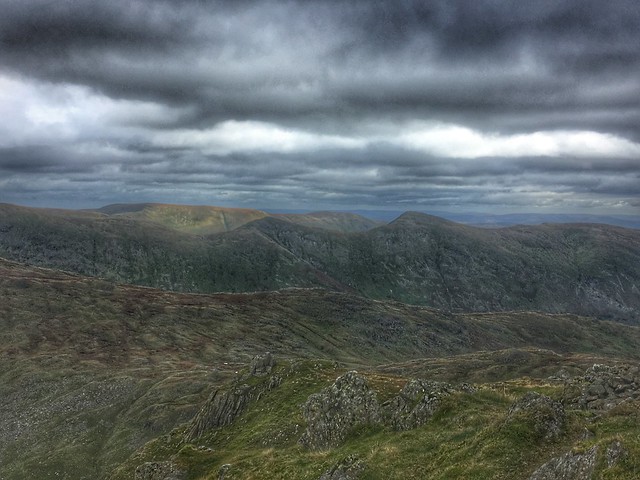 over to Fairfield, Saint Sunday Crag and Helvellyn 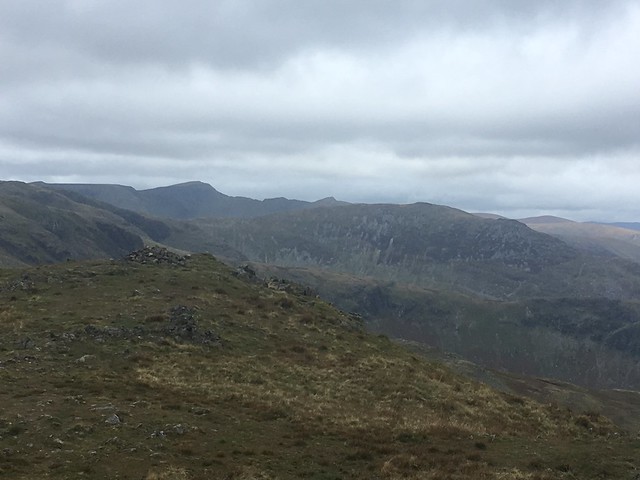 It was raining further west over the Coniston Fells, Langdale and the Scafells 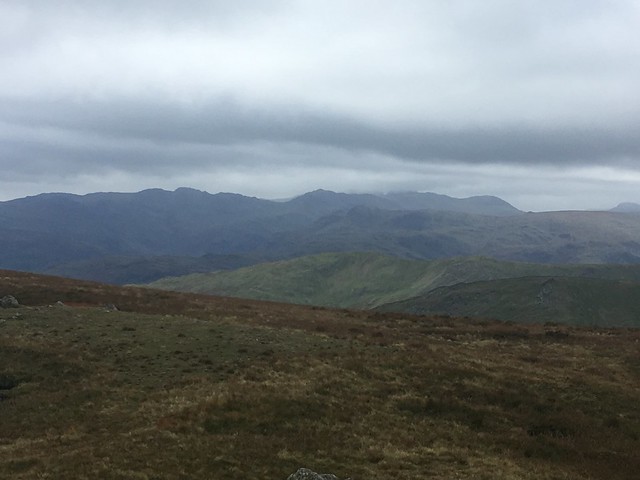 Time to start descending along the long ridge back to Ambleside. There’s Windermere in the distance 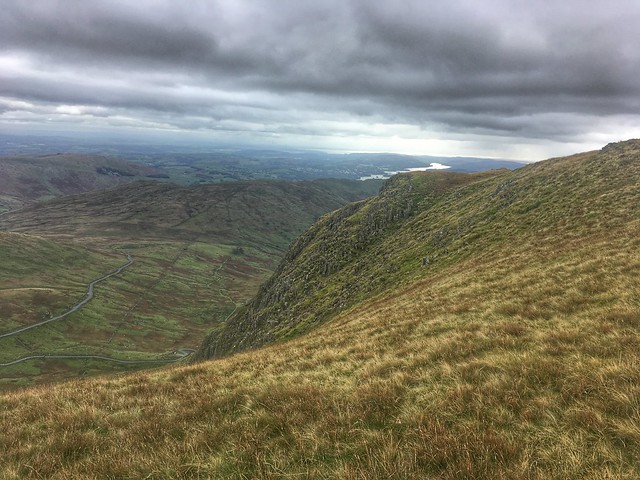 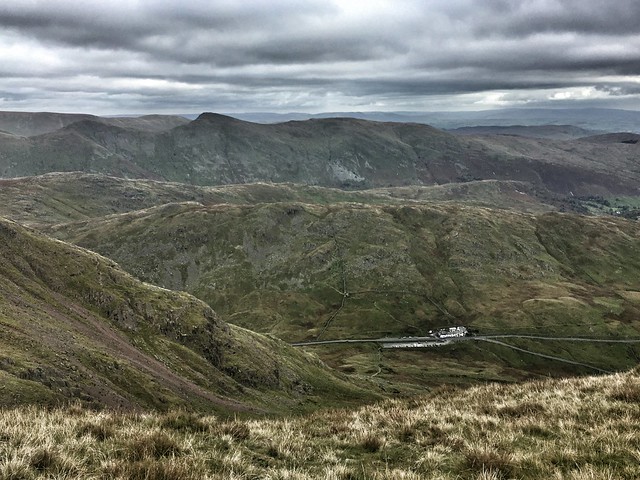 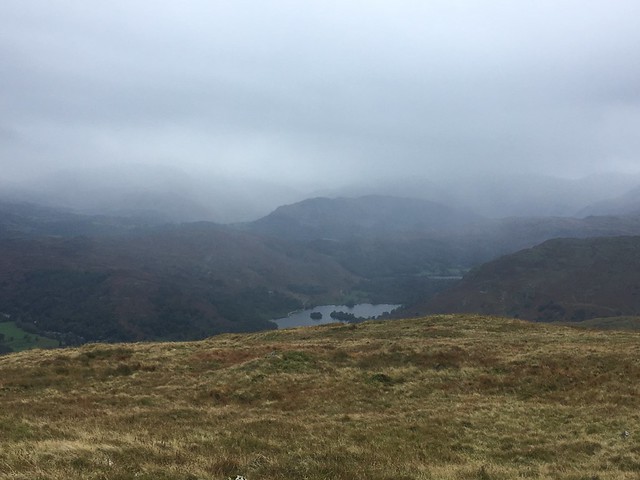 But it didn’t drift over as far east as Red Screes. Very typical of the Lakes where the weather can change from one valley to the next. 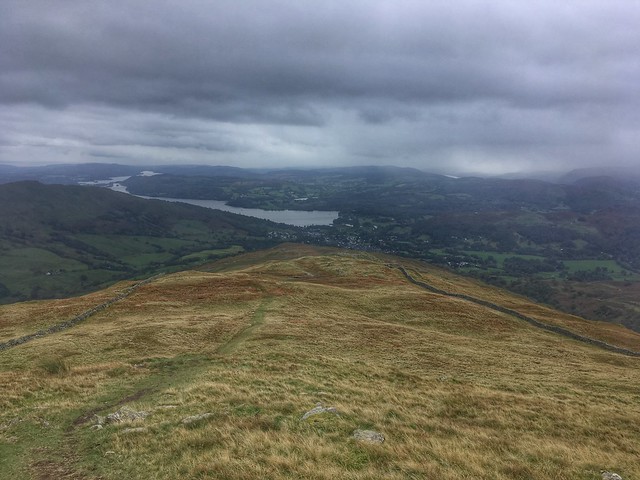 Getting closer to Ambleside 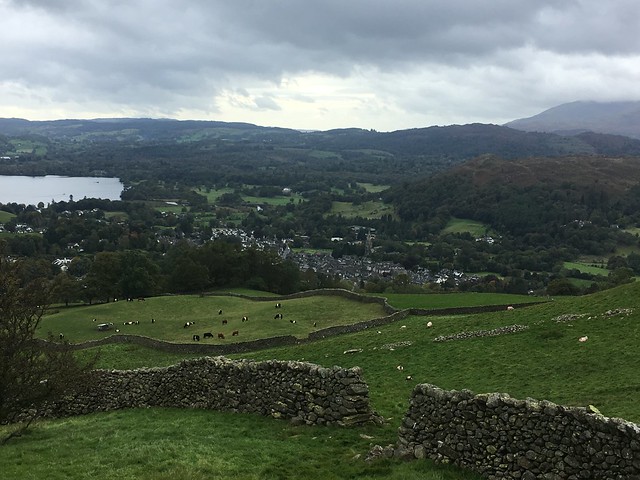 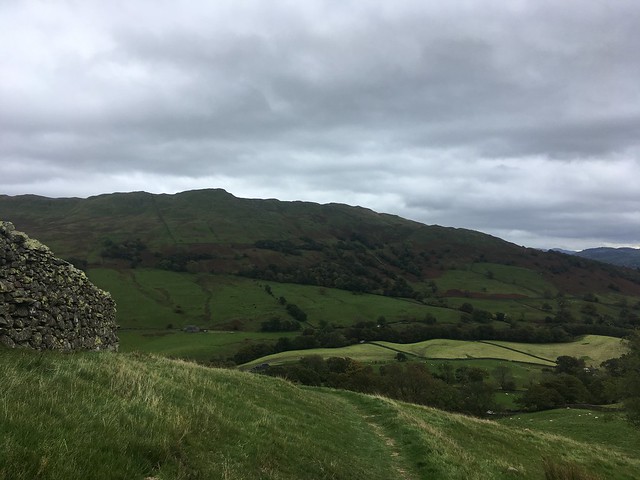 Nearing the end of the walk 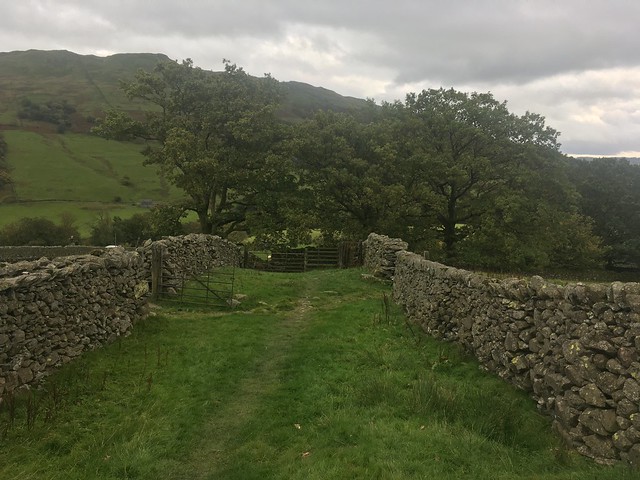 the final half a mile or so was down the “Struggle”, the steep road from Ambleside up to the Kirkstone Pass 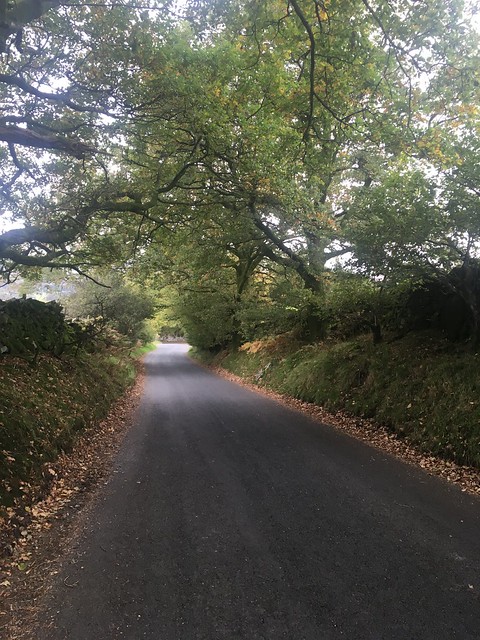 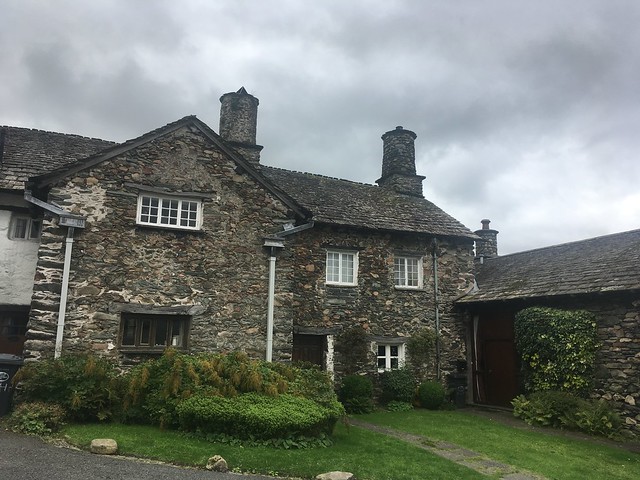 and crossed the river 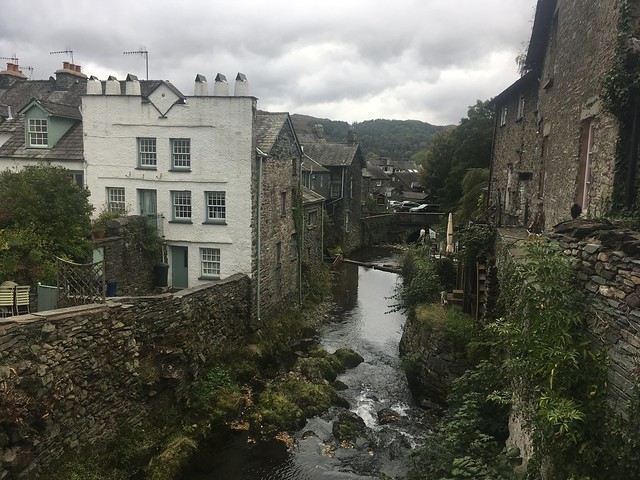 Time for a brew!

There’s nowhere I’d rather be on a fine, sunny day than in Lake District. So, as that was the weather forecast last Saturday, having had my enthusiasm for hill walking rekindled recently, we set out early and headed up the M6 to Ambleside.

We’d decided that we’d climb up to Wasfell Pike, not by the direct route up from Ambleside, a short hard slog, but by heading towards Troutbeck and approaching the summit from the south.

We parked up at the Waterhead car park and made our up to and then through Skelghyll wood. Looking back we could see Windermere and the Coniston Fells with cloud hiding the summit of the Old Man.

This was the view from the Jenkins Cragg viewpoint

Out of the woods we passed the High Skelghyll farm house

Loking back over the fields towards the Coniston fells

Much of the route was on tracks which were dry and solid underfoot, but once on the fells we had to navigate some peat bogs which much be pretty awful after heavy rain.

Eventually we made the summit of Wasfell Pike to be greeted with a fantastic 360 degree view.

Looking down the full length of Windermere

Looking east toward the Kirkwood Pass

We made our way back down to Ambleside by the Direct route, passing a large number of walkers on their way up.

It took less than an hour to reach the centre of Ambleside. Taking a well deserved coffee in one of the many cafes, it was still only early afternoon and as it was one of those warm, sunny days that ae quite rare in this part of the world we decided to make the most of it and continue our walk. Our target this time was Loughrigg which we’d climbed just a few weeks before during our holiday in Coniston. But this time we were going to follow a different route climbing up from Ambleside, rather from the Grasmere side.

It was a longer route than up from White Moss but it was probably an easier ascent. The height being gained relatively gradually up the road and track from Ambleside, then across some peaty territory, skirting bogs, with just a few steep stretches.

Looking towards Grasmere, Holme fell and part of the “Fairfield Horsedhoe”

Towards Ambleside and Windermere

After a short rest, enjoying the view, we retraced our route back to Ambleside and the car park at Waterhead.

It was about 6:30 and we decided to find somewhere to have a cup of tea before heading home. As it was after 5 mst of the cafes were closed, but fortunately we found a chippy where we were able to but a mug of tea which we drank on the terrace overlooking the lake. Oh, and it would have been rude not to buy a few chips as well! A good end to a great day.

The top of Windermere at Ambleside

A blog post by Barbara of Milady’s Boudoir alerted me to the Armitt Library in Ambleside. So it was on my list of places to visit during our recent holiday in the Lake District. It’s an interesting little place. A library on the top floor and museum on the ground floor.

The Armitt Library was founded by Mary Louisa Armitt in 1909 and formally opened following her death in 1912. It was intended as a resource for the local scholarly community and incorporated the Ambleside Book Society founded in 1828 and the Ambleside Ruskin Library, which dates from the 1890s. The reference library on the first floor is free to use and houses a wealth of books on the local area and its history.

The main exhibition was about the life of Beatrix Potter and her drawings of fungi. It was well curated and reading about Beatrix we were also able to learn a few things about life in the Lake District at the beginning of the 20th Century. But my main motivation for visiting the museum was to see the permanent exhibitions of works by Kurt Schwitters, the German abstract artist who lived in and around Ambleside for the last few years of his life.

He used any materials he could find – paper, cardboard, scraps of print, bits of wood, string, cotton wool, bus tickets and anything else that came to hand – incorporating them into abstract collage, installation, poetry and performance.

Learning that he was wanted by the Gestapo for an “interview” in 1937 he fled to Norway but when the Nazis invaded in 1940 he had to flee again, this time to Britain. Initially he was interred as an “enemy alien” in Scotland and then the Isle of Man. He was released in November 1941, moving first to London and then, in 1945, settling in the Lake district. He died in 1948.

Although his real interest was in creating his three dimensional collages, he was an accomplished figurative artist and used to paint portraits of local people and landscapes of the area to try and earn a few bob. The Armitt have managed to collect several of these and have others on loan and they constitute the main part of the exhibition, although they also have a few example of Merz.

This is his painting of Bridge House in Ambleside, a tourist attraction now owned by the National Trust and which stands almost directly opposite the Armitt.

This is my photograph of the building

I enjoyed looking at the paintings as they gave an insight into the artist who had to reel them off to make some money. However,it’s his Merz works that single him out as a significant artist. His collages didn’t impress the locals. But he did manage to win prizes in the local art show for some of his conventional paintings of flowers.