One song that struck a chord* with me during one of the concerts that took place during the Celtic Connections festival was Building Ships, performed by Glasgow based singer Findlay Napier. While mourning the passing of a once great industry. It pays tribute to the workers who built the mighty ships for which Glasgow was renowned.

On his Bandcamp site, the singer tells us that

From a conversation about reopening Scotland’s shipyards with my Dad. He was a marine engineer and occasional builder of ships. It became clear to me that without a long plan, agreed on by all political parties, we’ll never see industry like that in Glasgow again.

Given my line of work, these lines particularly resonate with me

“That dust” would have been asbestos, which was used for insulation and fire protection throughout ships built before July 2002. Consequently many shipbuilders contracted serious, usually fatal, lung diseases – asbestosis, lung cancer and mesothelioma (a particularly nasty cancer of the outer lining of the lung).

There were other health hazards too – noise, damaging hand-arm vibration and exposure to welding fume (another lung carcinogen)

Asbestos hasn’t been used in ships since the end of 2010 – but there’s plenty of vessels out there on the sea that contain lots of it. And there’s a particular risk of high exposure at the end of their life when they’re broken up.

Everyone among them should get fair and equal pay

Thursday was the last day of our holiday and we decided that although rain showers were forecast we’d get out for a walk. We managed to persuade our son to come out with us so we decided on a route that wouldn’t be too challenging.

We drove over to the National Trust Car Park at Great Wood on the east side of the lake and set off up through the woods, heading for Walla Crag. 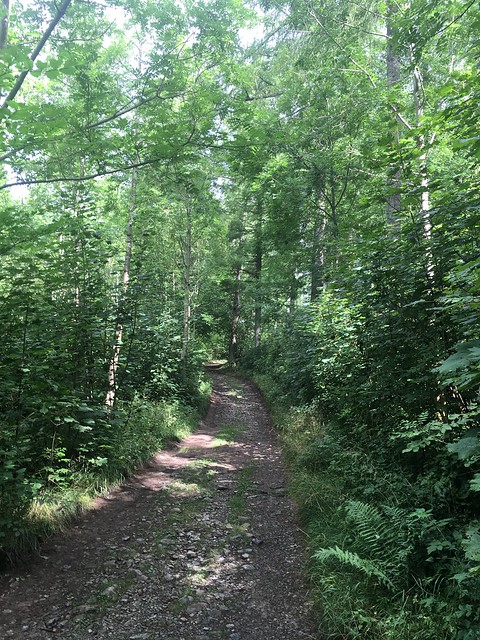 The path climbed up through the woods, eventually reaching a path where we turned right towards Castlerigg farm. Views opened up of Derwent Water and the fells to the west of the lake 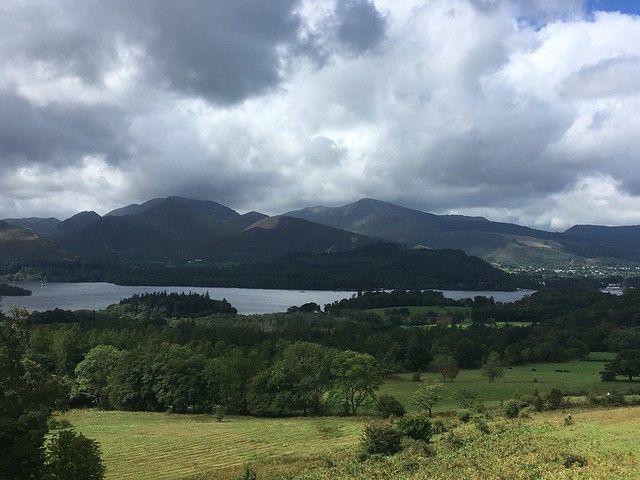 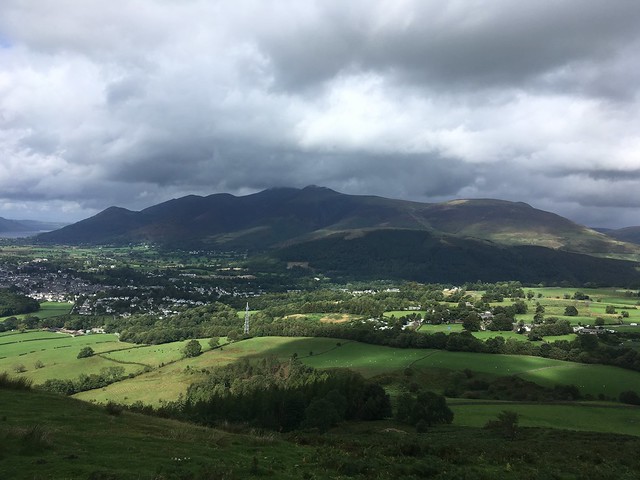 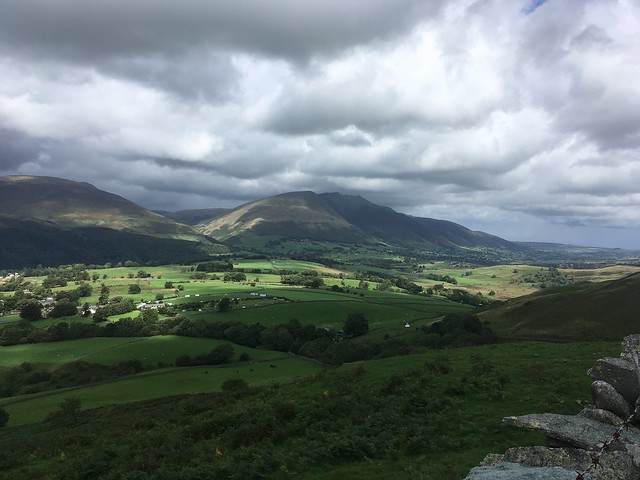 Passing the farm we had a short sharp climb up the fell, but with great views

It’s a relatively short climb up to the top of the crag, although it is classified as a Wainwright as the grumpy author of the classic guidebooks to the Lakeland fells gives it it’s own entry due to it’s popularity. It’s certainly a great viewpoint.

The dark clouds threatening rain made it very atmospheric. 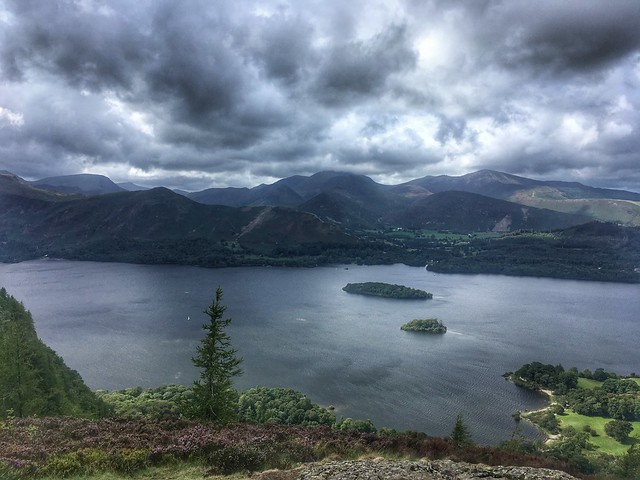 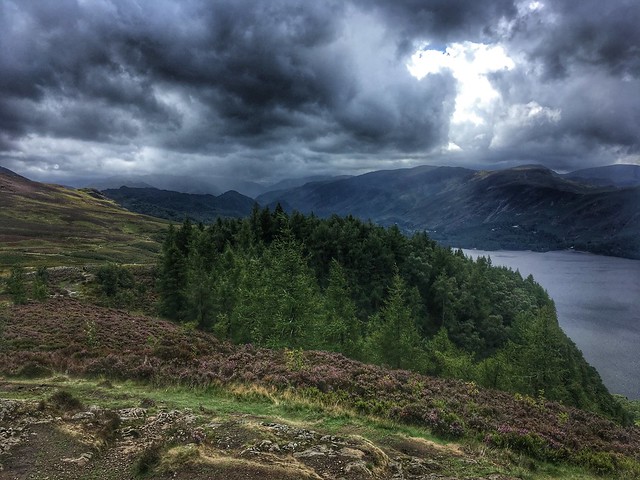 Bleaberry Fell, only a mile away, looked inviting 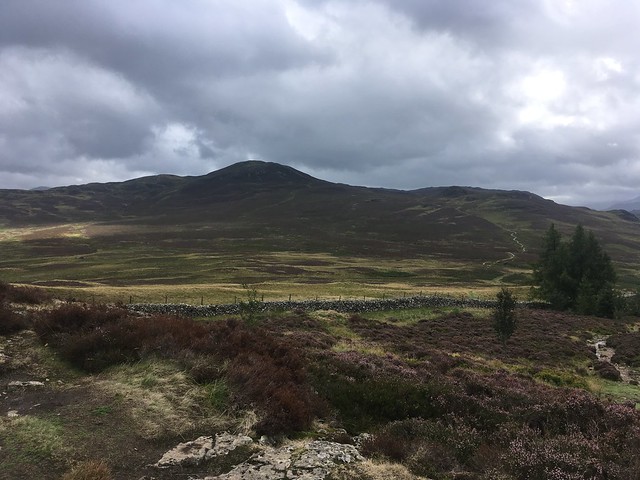 but son wasn’t so keen on extending the walk, so we continued on our pre-planned route taking the path descending gradually down the hill towards Ashness Bridge. 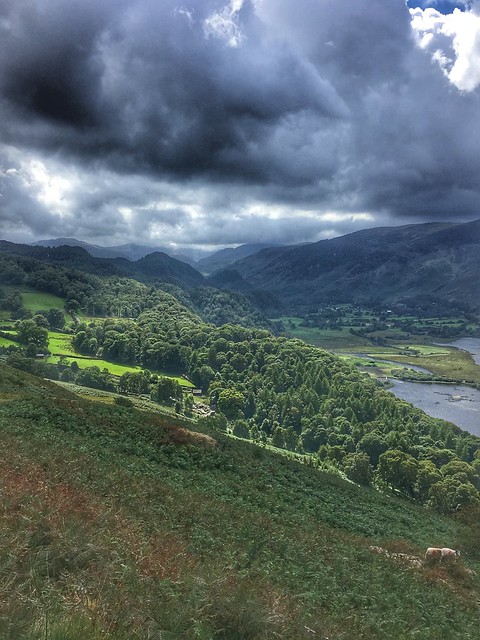 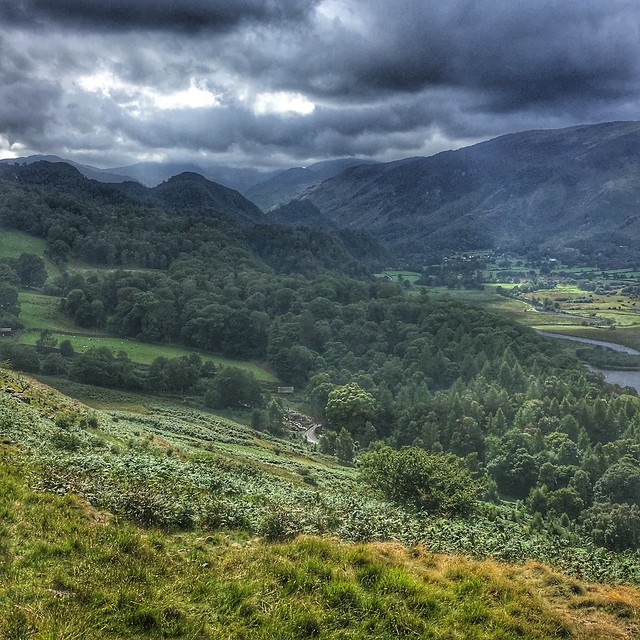 Looking back over Derwent Water 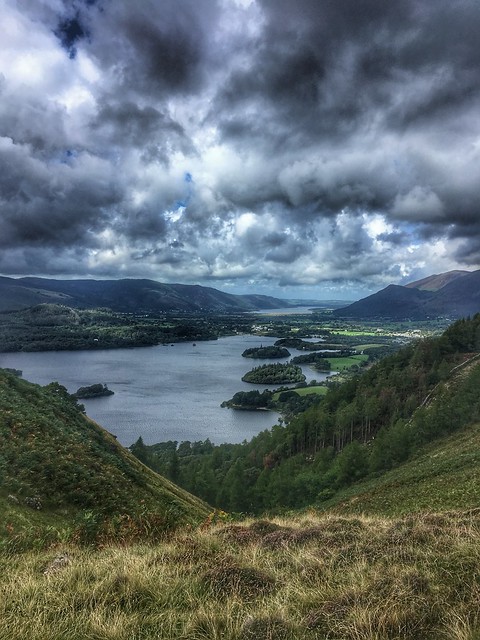 It didn’t take us too long to reach Ashness Bridge, a traditional stone-built bridge on the single-track road to Watendlath. It’s a very popular tourist spot as it’s easily accessible and is allegedly the most photographed packhorse bridge in the Lake District, so I had to stop to take a few snaps. 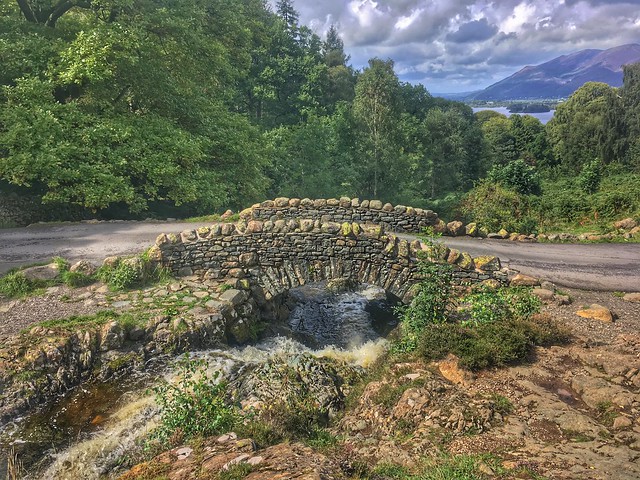 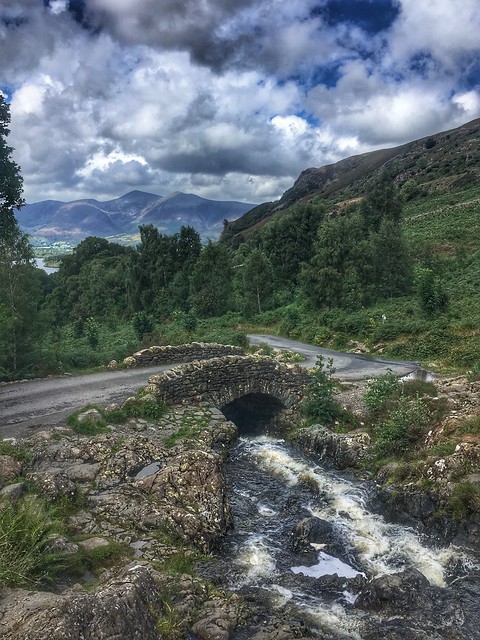 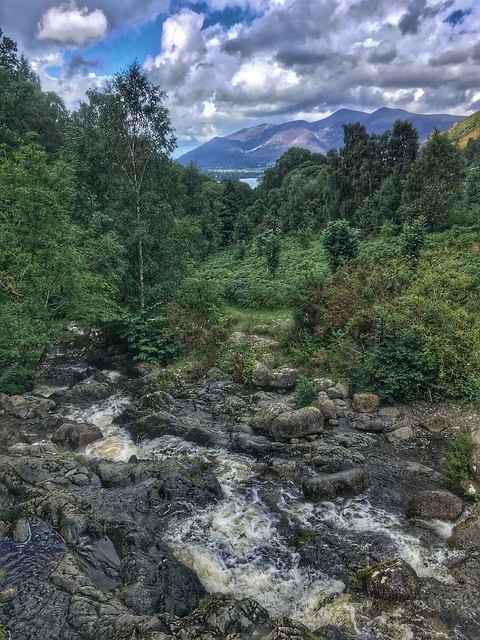 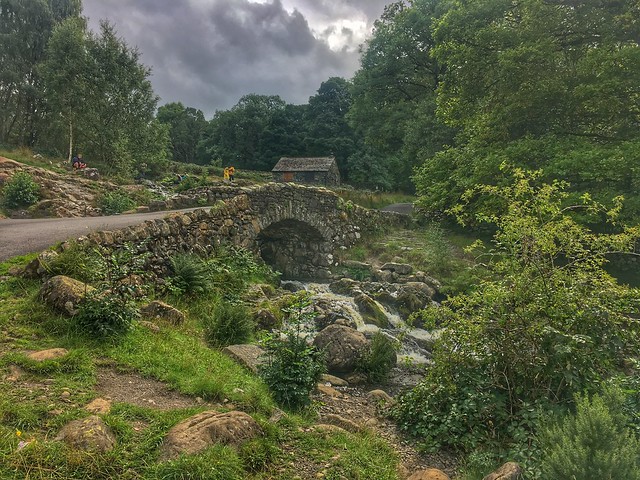 Rather than take the path through the woods from Ashness Bridge back to Great Wood car park we decided to follow the road down to the lake and walk along the shore to Calfclose Bay to have another look at the Millennium stones monument.
I’m not sure that this was a great idea because for a good stretch of the way back the path we’d walked along on Saturday was flooded as the Lake level had risen due to the on and off rain since Sunday.

Reaching the sculpture, this is what greeted us 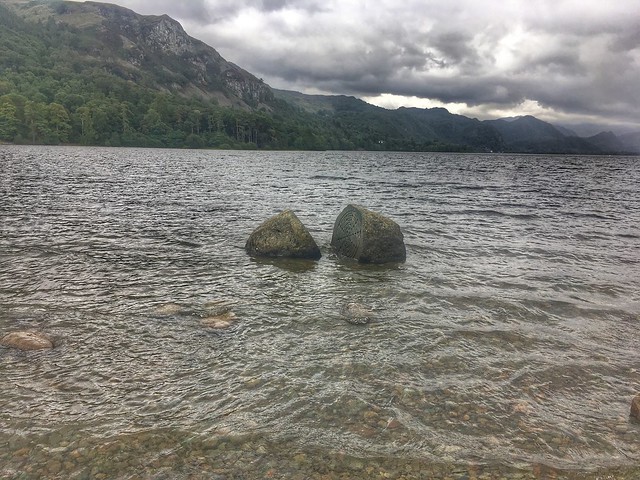 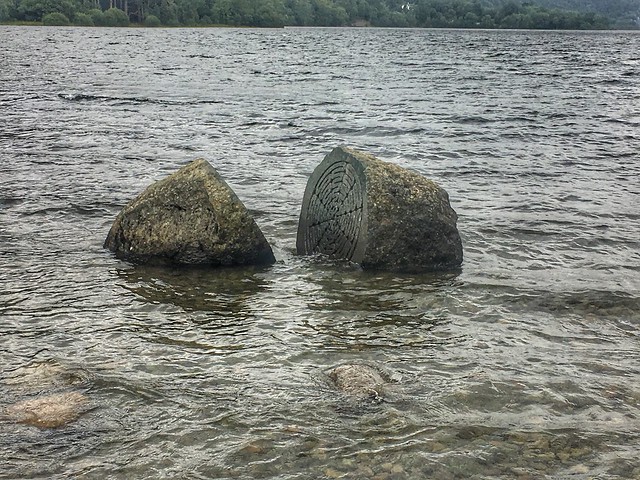 So far, despite rain clearly visible falling over the fells, especially up Borrowdale and in Newlands Valley across Derwent Water, we’d avoided the showers. But now it started to rain – very heavily. It was only a short walk back to the car, but it was time to get the waterproofs out of the rucksack!

Reaching the car we changed out of our boots and chucked the wet coats into the boot of the car and then drove back to Portinscale. Another good walk.

The north of England has been battered by heavy rain for several weeks now. Cumbria being particularly badly hit before Christmas with repeated floods. Then on Boxing Day it was the turn of Lancashire and Yorkshire.

Although we got off lightly compared to places like York, Hebden Bridge and Mytholmroyd on the other side of the Pennines and Ribchester, Whalley and Croston over here, the River Douglas and othe watercourses in Wigan burst their banks. The flood defences on the Dougie, a dam built upstream of the town centre, were overwhelmed – water can be seen running over the top of the dam in the following picture.

It happened so quickly. I’d popped out to Tesco’s and took the path down by the river and could see that the river was running high. When I came out again a few minutes later it had overflowed and was beginning to submerge the path. The shortest route home was blocked by flood water.

For the rest of the day the news was dominated about the effects of the deluge on the north of England, with local reports of houses and shops flooded and roads closed. But the next day the clouds had cleared and I woke to blue skies. Feeling in need of some exercise after indulging ourselves for a few days we decided to go out for a walk so laced up our boots and set out towards the Plantations.

The flood waters had receded and although the Dougie was full and flowing fast, we were able to walk along the path towards the dam. It was now holding back the water, forming a lake up the valley. “Look out for the Loch Whelley Monster” shouted out a passer by walking his dog

So we took the rather muddy path through the woods on the hill above the brook, crossing higher up the valley.

The rest of the route was generally fine, if a little muddier than usual.

We headed up through the Plantations, crossing the canal

and headed up past Haigh Hall

Stopping at the stables cafe to buy some drinks, we continued along past the car park and then down Sennicar Lane

back towards the canal and Leyland Mill. Then back home for coffee and stroopwafels which we’d bought on Manchester Christmas Market a couple of weeks ago – bringing back memories of our short holiday in Amsterdam in August.

With more rain to come over the next few days, memories of Christmas and New year are not going to be so pleasant for many people in th eNorth of England.

I spent last week in Ireland. The main purpose of my visit was to attend the annual conference of the Occupational Hygiene Society of Ireland in Portlaoise.  (If you don’t know what occupational hygiene is see here). The theme of the Conference was “How well do we communicate” and one of the highlights was the talk by Fergus McAuliffe, an Environmental Scientist from University College Cork.  Fergus won the International  “Fame Lab” competition last year and was a speaker at the TEDX Ireland conference in Dublin.

His talk was about communicating science, with particular reference to presentations. The key points were :

Although his talk was aimed at “scientists” his advice could equally apply to other contexts – including art. I’ve seen quite a few “artists statements” and descriptions or critiques of works of art where I can’t understand what the speaker or author is going on about!

I  recently came across a slide deck posted on Slideshare by Chris Atherton. She’s a psychologist and used to be a Senior Lecturer (formerly Lecturer) in Psychology at the University of Central Lancashire. She’s now working as a User Experience Architect for Numiko ltd

The slides are from a presentation Chris made in April at the Leeds Bettakultcha. According to their website this is:

an evening of short talks accompanied by digital slide presentations. The presenters are all volunteers who have based their talk around something that they are passionate about – which can be absolutely anything.

The format of Bettakultcha talks is 20 slides for 15 seconds each (they transition automatically), and you can talk about anything you want. Chris chose to talk about (what else) psychology.

Too many people use Powerpoint in a bad way – either creating an outline or using it as a script. In either case that results in badly designed, over wordy slides. The slides for a “lecture” type presentation should be visual aids to supplement what the presenter is saying, not to reproduce the talk or act as a teleprompter. They should be visual with minimal words that add to what the speaker is saying. Now this means that if the slides are posted onto Slideshare , where the speaker isn’t present, the slide deck can look pretty meaningless. Chris has got over the problem by annotating the slides with a summary of what she said. The annotations on the slides were added afterwards  so that they make sense to the viewer. They weren’t present on the originals. I’ve noticed that a few people have started to do this and it’s a technique that I’ve started to use with presentations related to my work that I’ve uploaded to Slideshare.

She hasn’t used Powerpoint – she’s tried something quite different. The slides are hand drawn on an iPad using the “Paper”. It’s a, fresh, original approach. You’d have to be reasonably good at drawing to use it, though.

As there seems to have been some problems with Slideshare embeds lately, the link to the presentation on the Slideshare website is:

As well as showing a fresh, innovative approach to slide design, I think that this presentation is a really good example  of how to get a technical topic across to a lay audience in a limited time with well designed slides!