After a week away in Ireland with work, I took a break last week . We’d thought about going away somewhere, but decided we’d stay at home and have a few days out. Things didn’t work out quite as we’d planned, but I still had an enjoyable week off.

On Monday we decided to take advantage of our Cadw membership and drove over to Conwy, about an hour and a half away in North Wales. I zoom past regularly on the way too and from Holyhead during my Irish trips, but it has been a while since we last visited the town.

Conwy (Anglicised as Conway), was founded along with it’s castle by Edward I during his subjugation of Wales in the 13th Century.  The castle and the town walls (which are still practically intact) form an imposing fortification that dominates a strategic position at the mouth of the River Conwy. They’re even more impressive when you consider they were built in 4 years between 1283 and 1287, at the same time as similar fortifications were being constructed further south down the coast at Caernarfon and Harlech.

Although there was a monastery nearby and ther had been a Norman Castle over the river at Deganwy, Conwy was a new town, built from scratch. It was a bastide, a settlement populated by English settlers from which the Welsh natives were barred.

After parking up we stopped for a brew and a cake in a nice little Turkish cafe in the town before making our way to the castle. 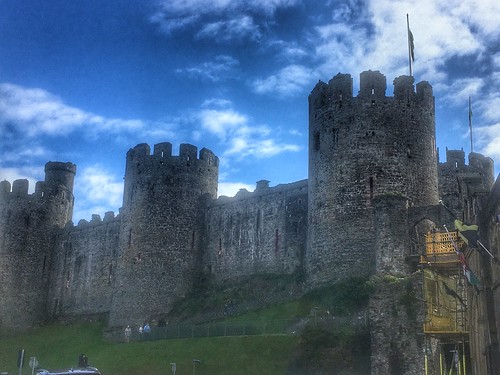 The castle is a massive structure with a high curtain wall with eight towers and is extremely well preserved.

Spiral staircases in the towers have been restored so that it’s possible to walk a complete circuit around the battlements and visitors can also climb to the top of most of the towers.

It was a bit of a dull day, so the estuary looked rather grey, but attractive, nevertheless.

There were views over to the mountains

Looking over the battlements at the north end of the castle there was a good view of the three bridges – the new road bridge we’d driven over, the suspension bridge built by  Thomas Telford in 1822–26 and the tubular railway bridge designed by  Robert Stephenson which opened in 1849. The two older bridges are smaller versions of the structures built by the same engineers over the Menai Straits .

Visitors need to take care as the steps, battlements and flooring is rather uneven in places. A slight slip coming down from one of the towers led to a twisted ankle that had some repercussions for our plans later that week.