Mike Leigh’s new film about Peterloo goes out on general release today. We were lucky to see the preview a couple of weeks ago. It was shown at Home in Manchester, a few hundred yards from where the events actually happened,as part of the London Film Festival. We weren’t at Home but in Horwich at one of the cinemas around the country where the film and the question and answer session with Mike Leigh and Maxine Peake was relayed.

The film tells the story of the Peterloo Massacre which took place on St Peter’s Field in Manchester on 16 August 1819 and is one of the first key events in the struggle of working people in England. Manchester had grown massively from a small settlement in south Lancashire to become a dynamic metropolis of manufacturing based on the cotton industry. The mill owners became extremely rich but this was at the expense of their workers who lived in appalling conditions (described by Frederick Engels in his book The Condition of the Working Class in England written a few years later in 1845). In 1819 conditions were particularly bad due to the economic depression that followed the end of the Napoleonic Wars, which resulted in wage cuts and unemployment, and the passing of the Corn Laws in 1815 which led to increased food prices. The vote was restricted to the wealthy and there was massive disparity in representation around the country – the whole of Lancashire had only 2 MPs.

Manchester was something of a hot bed of radicalism and it was decided to organise a mass meeting on Peter’s Field in Manchester and the renowned Radical orator Henry Hunt was invited to speak and act as chair.

The local representatives of the ruling class were terrified, believing that revolution was in the air so they arranged for a military presence comprising 600 men of the 15th Hussars, several hundred infantrymen, a Royal Horse Artillery unit with two six-pounder guns, 400 men of the Cheshire Yeomanry, 400 special constables and 120 cavalry of the Manchester and Salford Yeomanry.

On the day 60,000–80,000 workers and their families, including children, marched to Manchester from the city and surrounding districts, with banners bearing slogans such as “Liberty and Fraternity” and “Taxation without Representation is Unjust and Tyrannical”, and assembled on Peter’s Field, an open space in the centre of the growing city. They came from all around South Lancashire, including a contingent from Wigan. Many of them had to walk a considerable distance to get there. Perhaps some of my ancestors were amongst them. 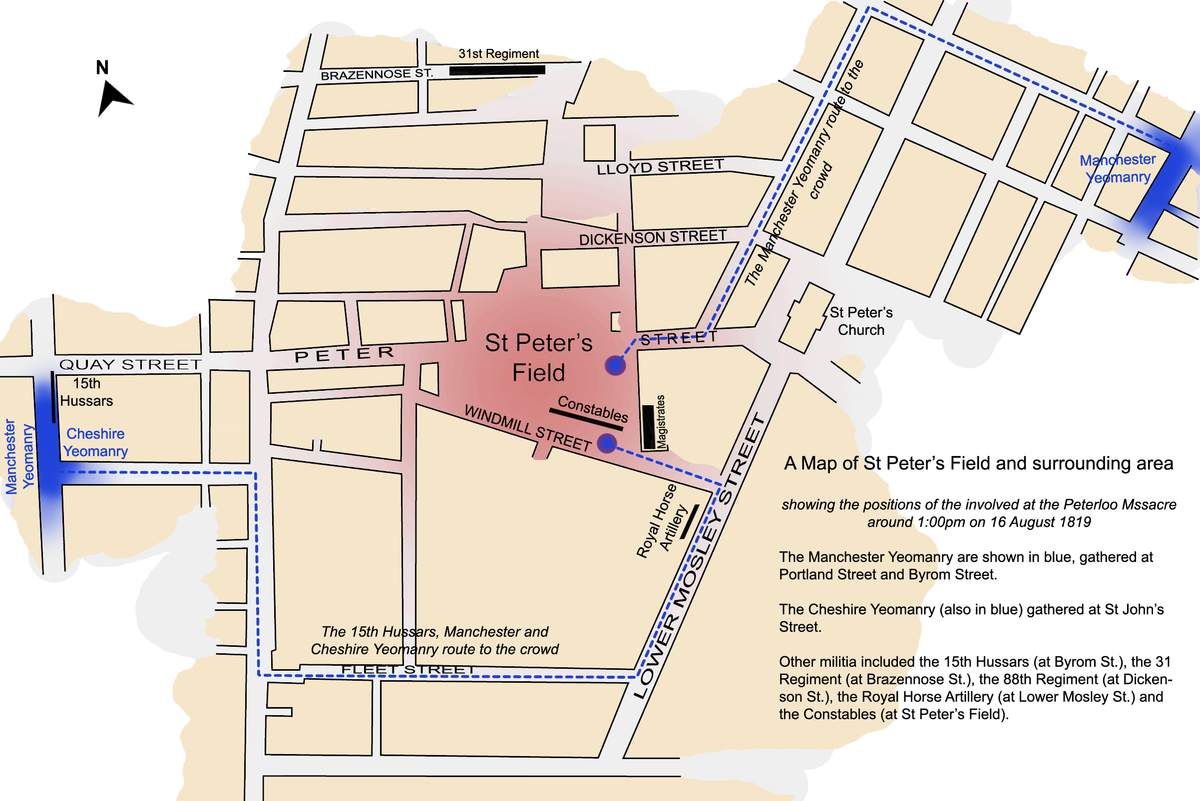 The meeting started and seeing the enthusiastic reception Hunt received on his arrival the local Magistrates lost their nerve, read the Riot Act and sent in the troops. They charged into the crowd, running over demonstrators with their horses and slashing out with their sabres. Hemmed in in a restricted area there was nowhere to run. At the end, by the time the field had been cleared there were 11–15 demonstrators killed and 400–700 injured.

Currently there’s very little evidence in Manchester of this pivotal event in working class history other than a circular memorial plaque high on the wall of the Free Trade Hall (where I used to go to concerts when I was a teenager and which is now a posh hotel)which stands where the massacre took place.

The events provoked outrage, summed up by Shelley’s poem, the Masque of Anarchy with it’s call to action

Rise like Lions after slumber
In unvanquishable number.
Shake your chains to earth like dew
Which in sleep had fallen on you—
Ye are many—they are few.

Next year there are plans to stage events to celebrate the bicentenary and the conceptual artist Jeremy Deller has been commissioned to create a memorial to be located on the forecourt of the former Central Station, behind the Midland Hotel, close to the location of the assembly. Details of the design were released this week.

As for the film, well it’s not a Hollywood action movie. The story develops gradually , bringing to life the lives of workers in Manchester and the radical atmosphere in the city. There’s a lot of talking, using the words of the protagonists themselves, illustrating the different views on what action was needed. Those arguing for a peaceful demonstration prevailed over those agitating for a more violent response to repression. Henry Hunt himself was shown to be something of a vain and pompous demagogue. The real heroes were the ordinary men and women of Manchester and Lancashire. It builds slowly to the demonstration itself and culminates in the slaughter.

Mike Leigh believes the events of Peterloo and the reasons why it occurred need to be more widely known. I agree. His film should help.