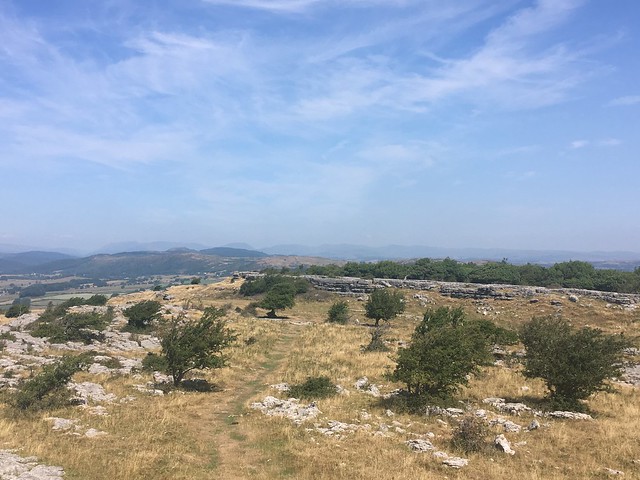 Taking advantage of the good weather I took a day off work and caught the train over to Grange-over-sands. I’d decided to follow a route over Hampsfell, combining it with a visit to the village of Cartmel.

Hampsfell is one of several modest limestone hills lying between the high Lakeland Fells and Morecambe Bay. We’d walked along a couple of them, Scout Scar and Cunswick Fell, near Kendal, only the previous week. This time it was a solo trip.

Grange-over-sands sits on the north shore of Morecambe bay, across from Arnside. Travelling by train meant that I’d be going over the viaduct that crosses the Kent estuary. The town developed in the Victorian era from a small fishing village, becoming a popular seaside resort after the construction of the railway line along the bay to Barrow-in-Furness.
Leaving the train station, after a short walk along the road, I turned on to the path that cut through Eggerslack Wood. 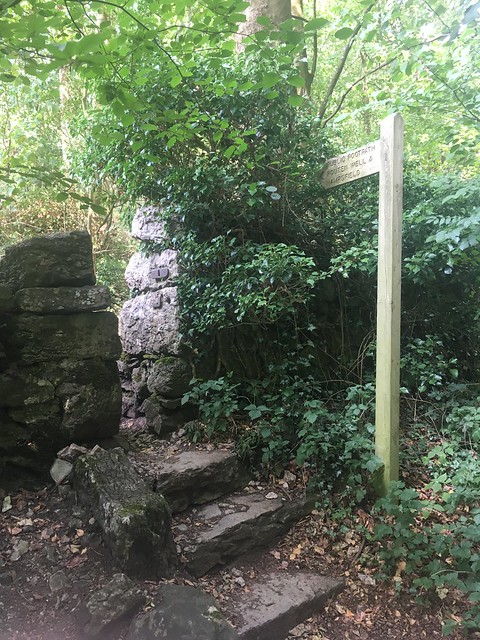 I climbed up the hill, the trees providing some welcome shade from the hot sun. 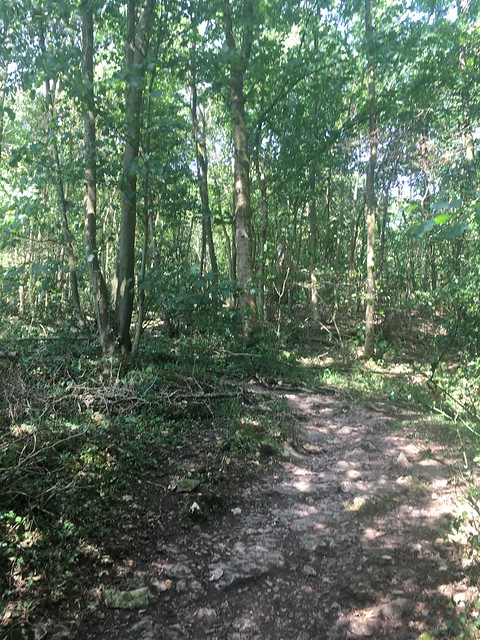 Eventually emerging onto the limestone moorland 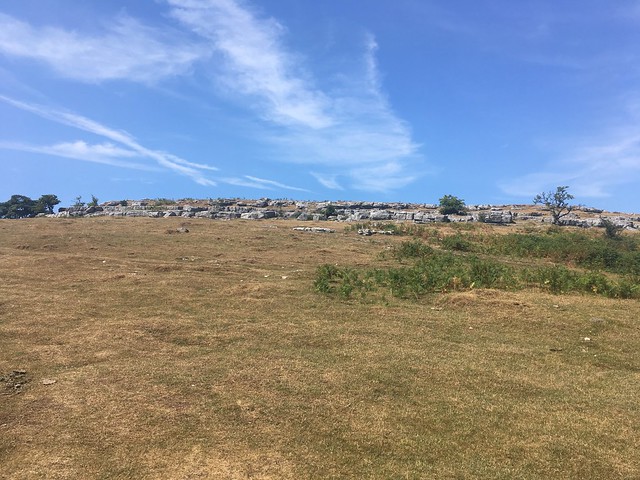 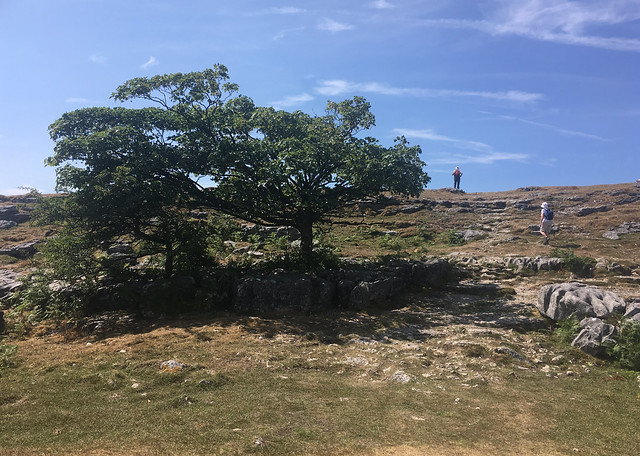 Climbing to the top of the hill the folly “Hampsfell Hospice” came into view. 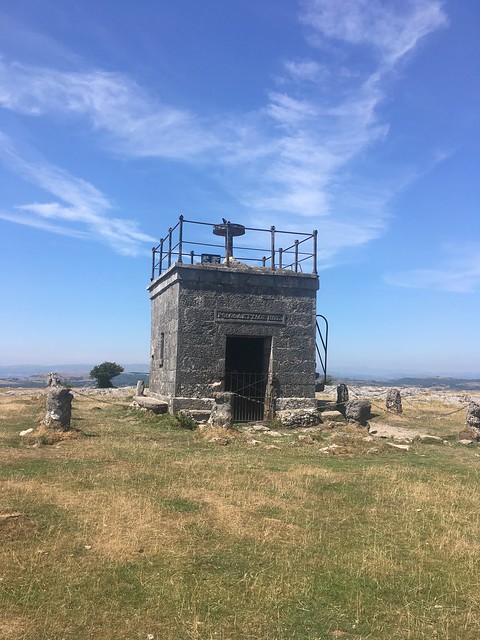 The building of the folly was commissioned by the pastor of Cartmel “for the shelter and entertainment of travellers” in 1846.

I stopped to admire the outstanding views over to the high Lakeland Fells in the north and Morecambe Bay to the south. As usual, the photos really can’t do them justice. 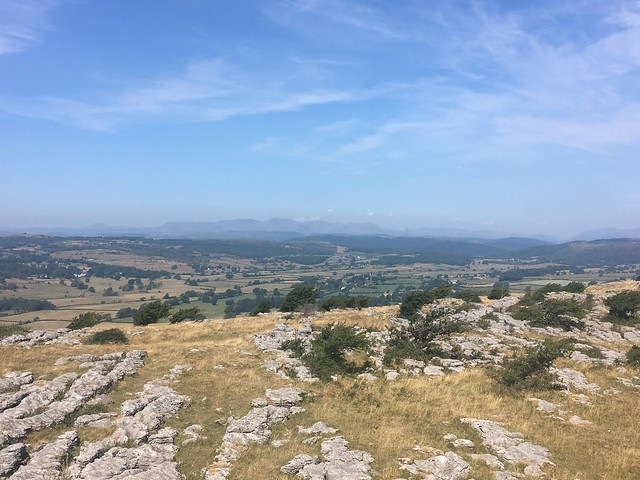 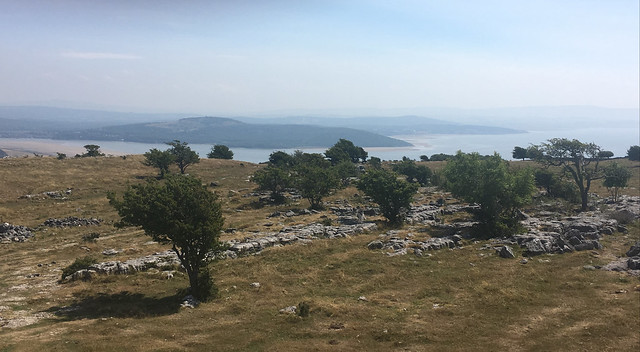 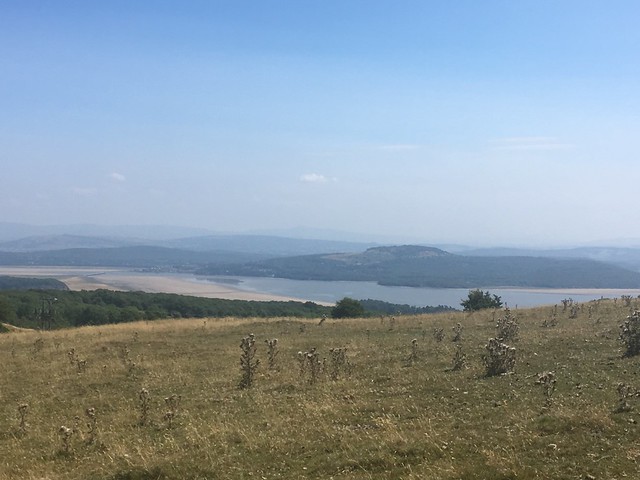 I had a look inside the Hospice

and then climbed on top where there’s a rather unusual summit viewfinder. You turn the pointer towards a landmark and the turntable gives an angle. Looking this up on the board let’s you work out what you are looking at.

After eating my sandwiches, I set off south along the ridge before cutting down the path downhill and across the fields towards the village of Cartmel. 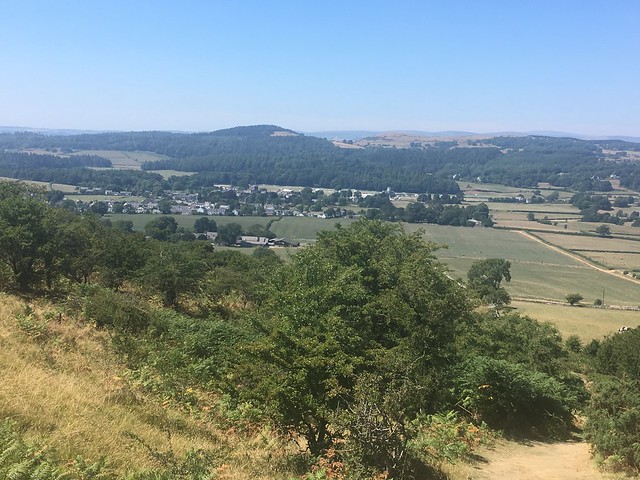 Cartmel is a very attractive village with an ancient Priory church and racecourse and is home to a Michelin 2 star restaurant, three pubs and the home of sticky toffee pudding. I’d never been there before as it’s one of those off the track places you never pass through so only end up there when that’s where you’re going. I was particularly interested in having a look at the Priory but also spent some time having a mooch around the village. 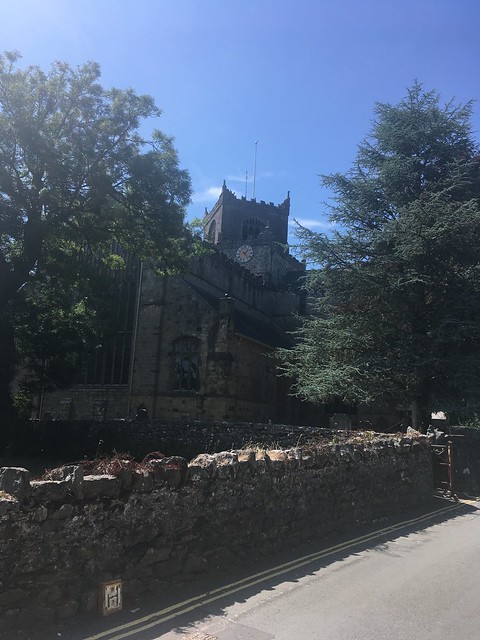 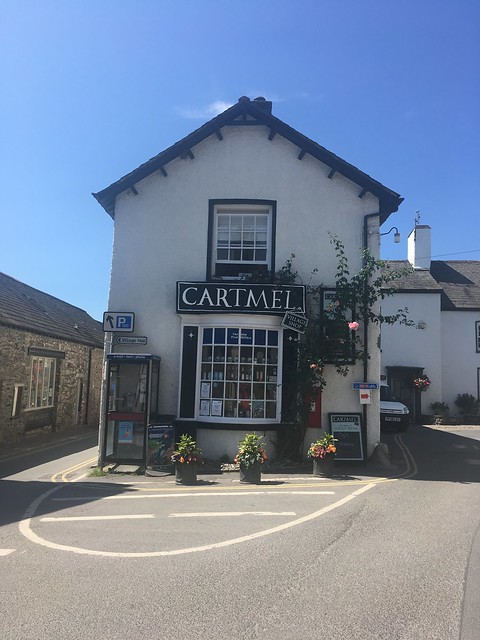 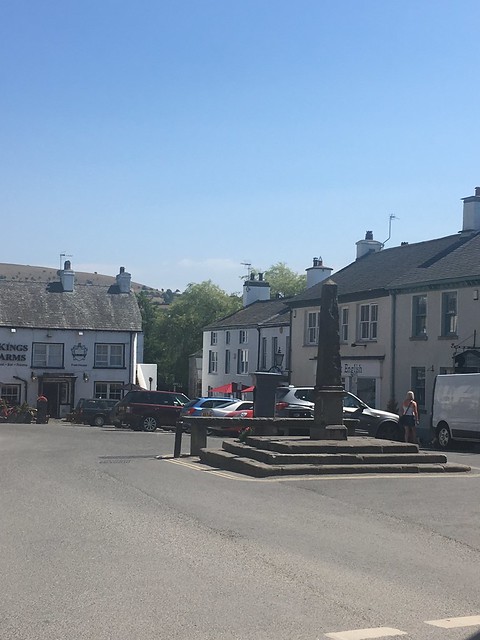 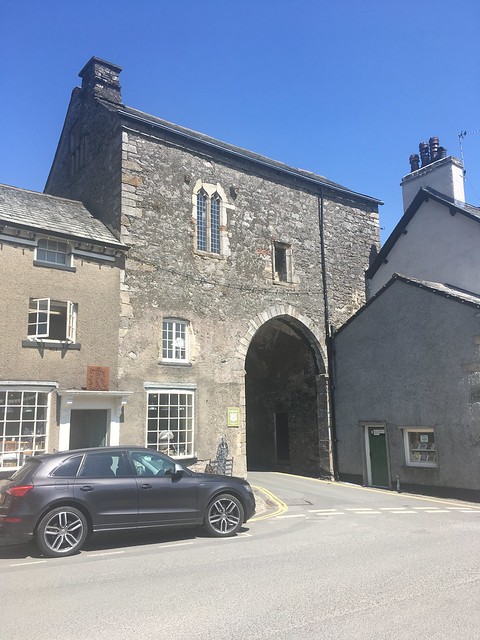 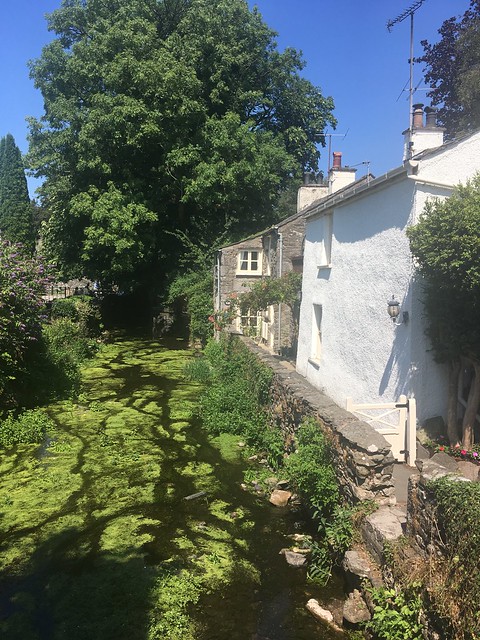 The small racecourse is in an attractive setting and there’d been a meting there just a couple of days before my visit. 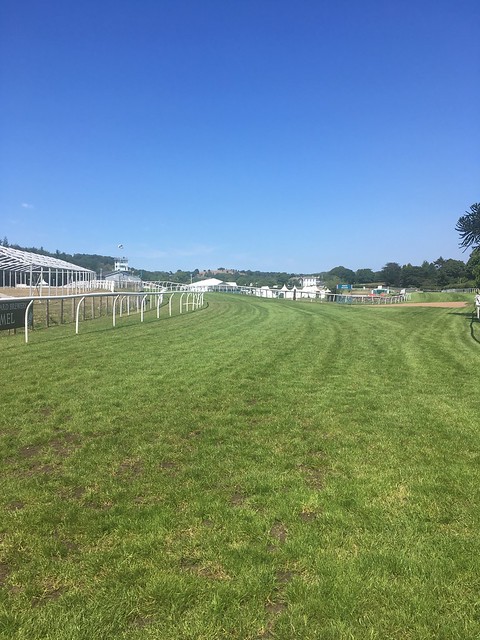 The large church, Cartmel Priory, used to be part of a monastery dating back to 1190. 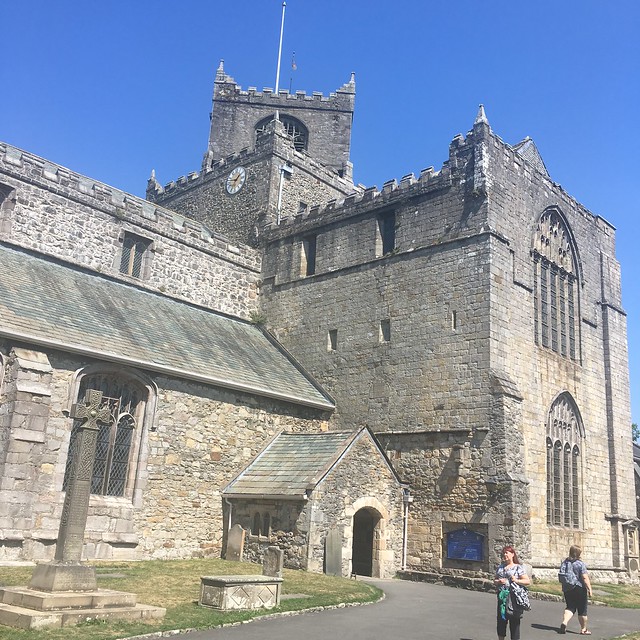 After the Dissolution of the Monasteries in 1536 the church survived as it was used as the Cartmel Parish church. Little else of the monatery remains other than the gatehouse in the village square which is now owned by the National Trust.

After indulging myself with an ice cream (it was a hot day after all !) I retraced my footsteps back up towards Hampsfell 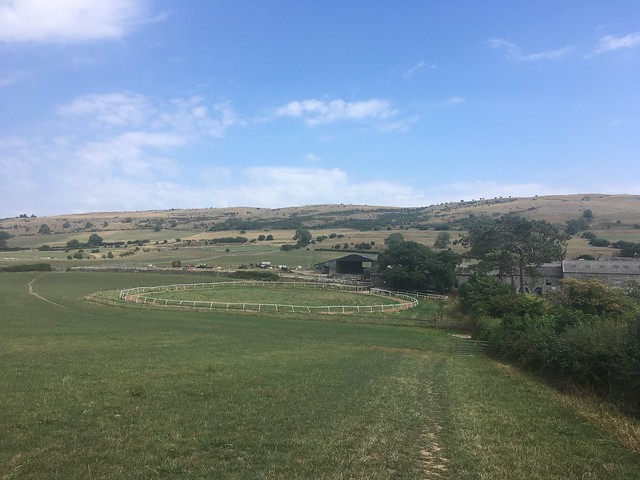 Reaching the ridge I headed south to Fell End. It had clouded over a little, but there were still great views over the fells and Bay

before descending down towards Grange-over-sands. 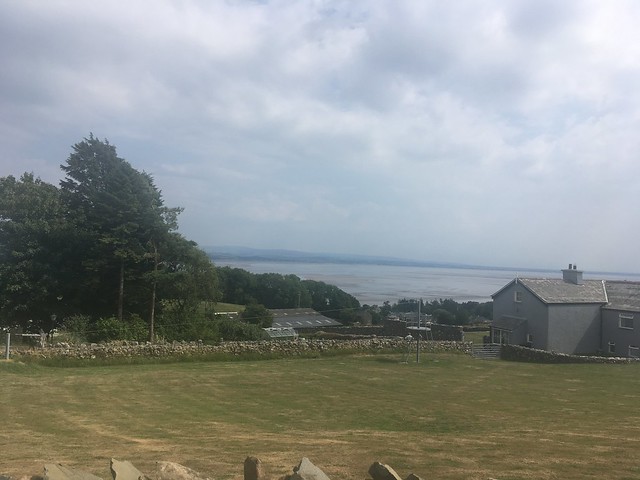 I cut across town and crossed the railway line to reach the promenade near the old Lido. 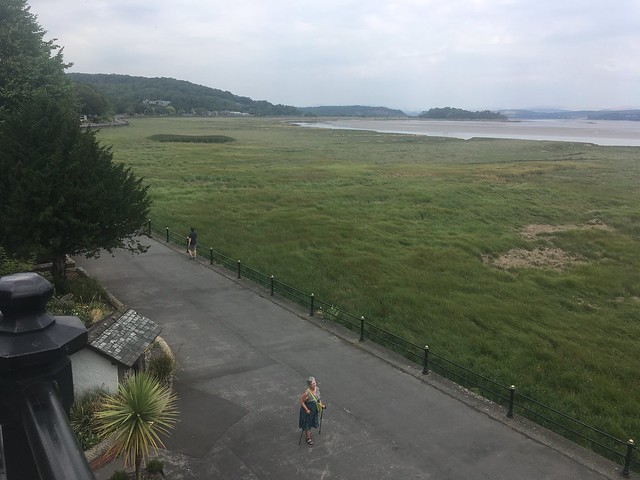 The River Kent used to flow alongside the promenade, but its course changed, flowing away from Grange. As a result the sea rarely reaches the prom and grass has grown over the sands and mudflats, creating a salt marsh. It was a pleasant stroll back to the train station, stopping off for a brew at the café half way along the prom. 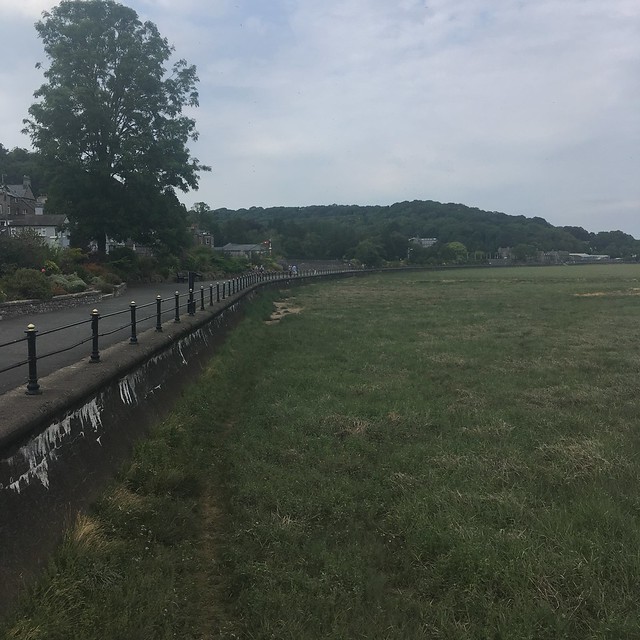 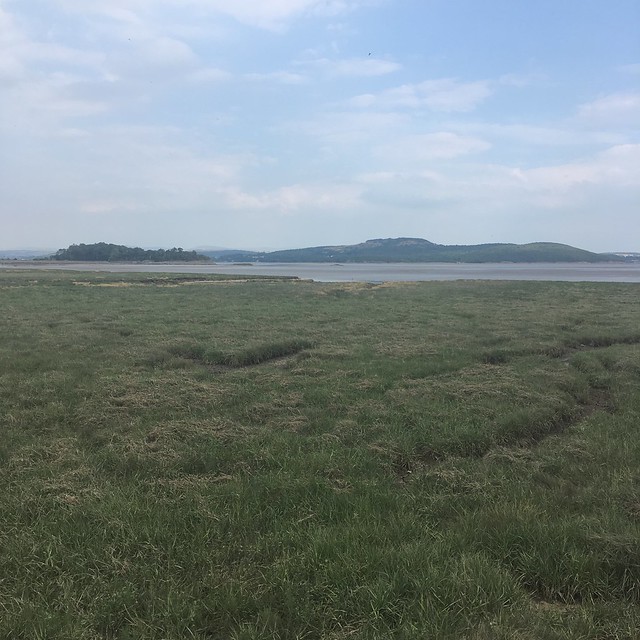 The prom is well maintained and looked after with flower beds (looking good despite the heat wave), some sculpture and ornate memorial benches. 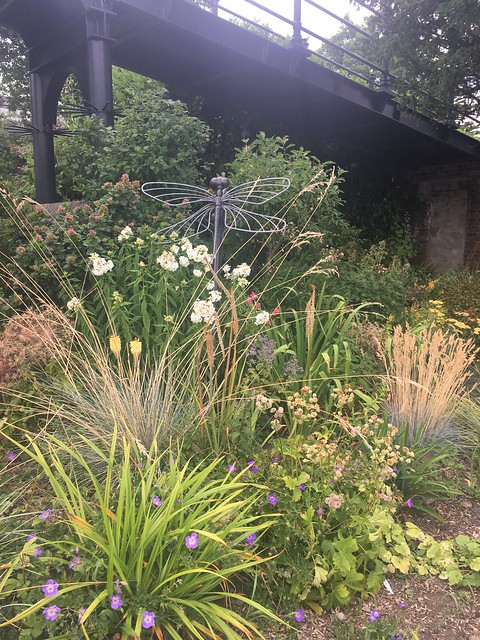 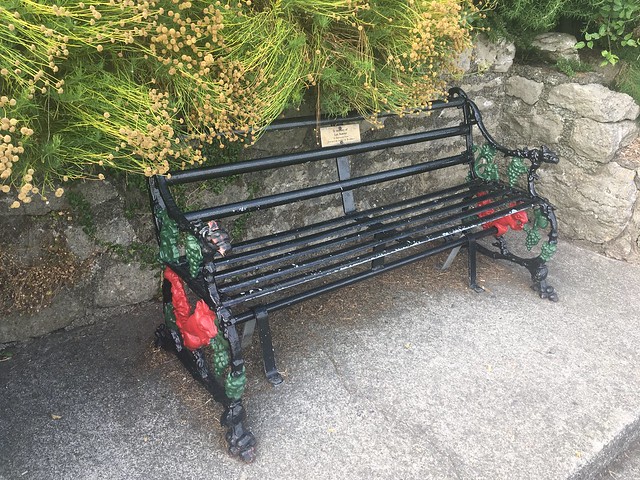 There’s a few paths across the salt marsh and I took the opportunity to walk over to nearer the bay. However, the tide was out so I didn’t see much sea! 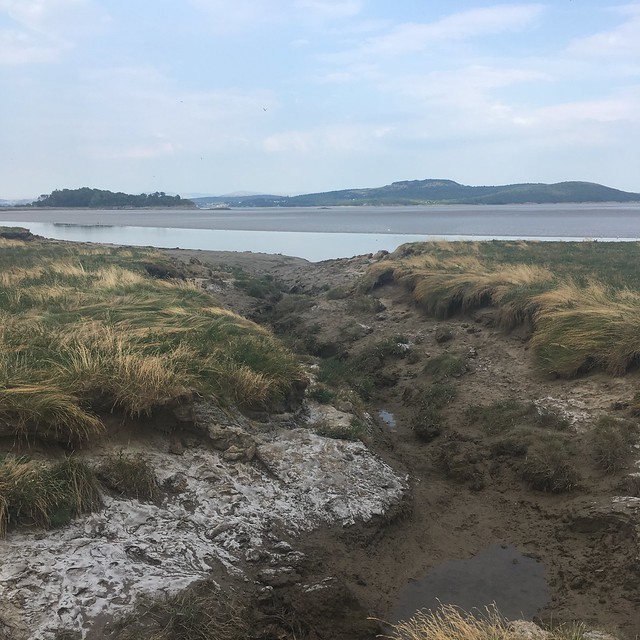 Looking back across the marsh to Grange 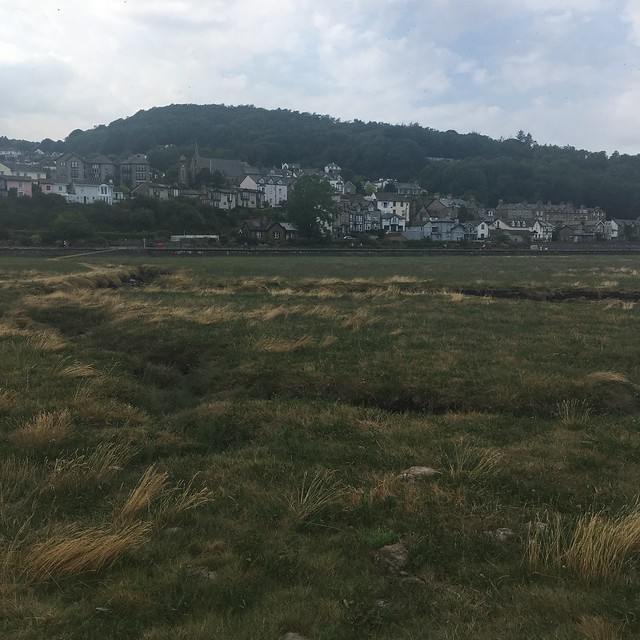 Looking across the marsh and bay to Arnside and Silverdale 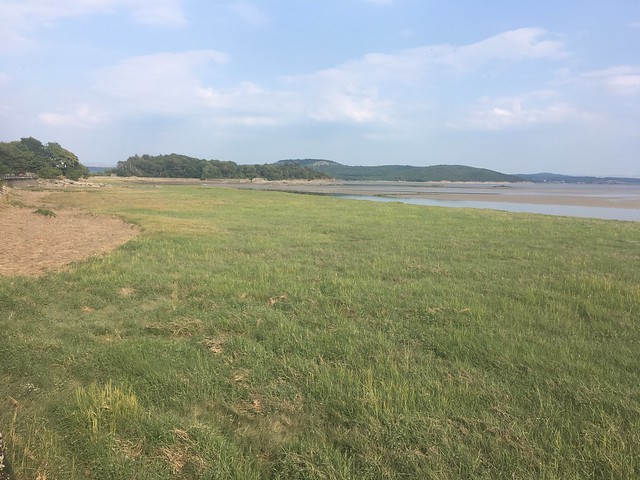 It was a pleasant stroll to finish of my walk.

After a short wait, I boarded the train to Preston and snatched a photo of Arnside as we crossed the Kent viaduct 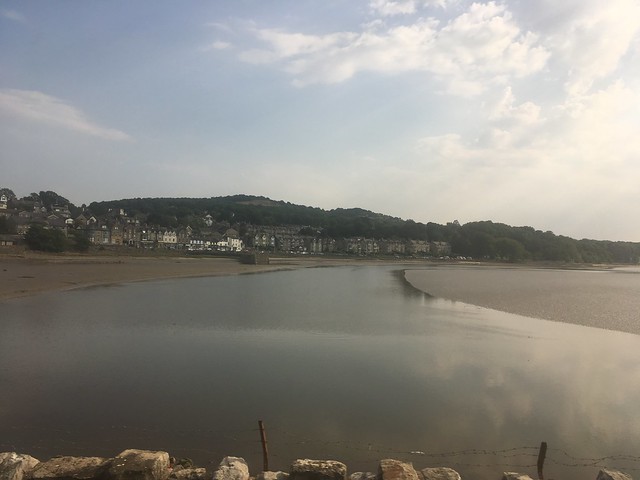