The weather got better and better as I drove across Anglesey towards Niwbwrch(Newborough in English. My objective was the sandy beach a work colleague had told me about. I’m not one for lying around on beaches, I soon get bored, but I was looking forward to a walk along the sand. I parked up about a mile from the beach in the car park by Llyn Rhos-ddu and set off through the dunes and beside the pine forest.

In the distance, beyond the dunes, the mountains of south Snowdonia and the LLyn Peninsula were silhouetted on the horizon. Snowdon, the Glyers and other northern peaks were still blanketed in cloud. 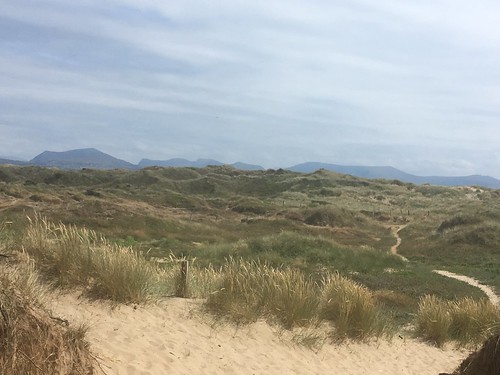 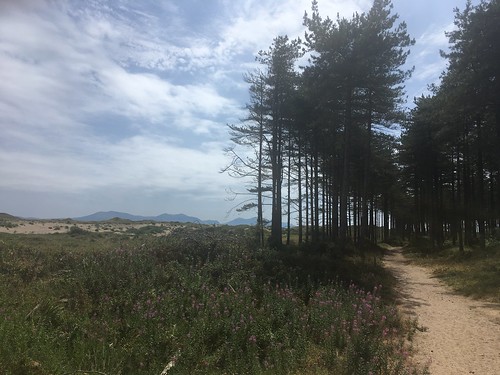 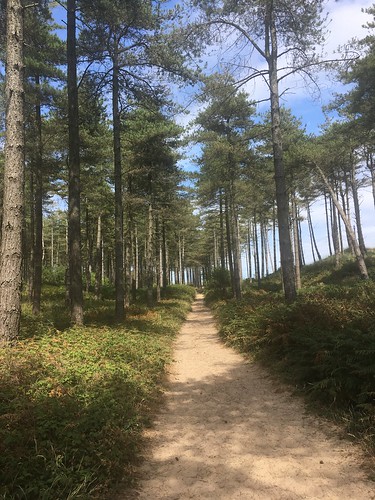 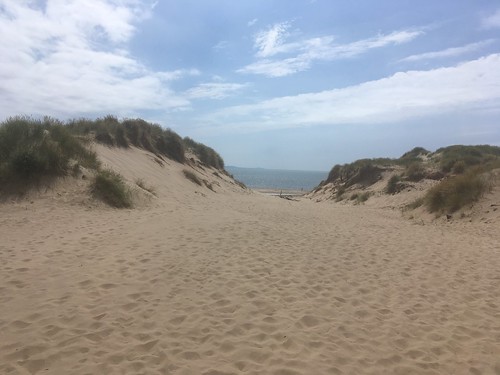 Eventually I reached the beach – a wide expanse of sand with some shingle stretching across to Ynys Llanddwyn, also known as Ynys Y Bendigaid – “the Island of the Blessed”. 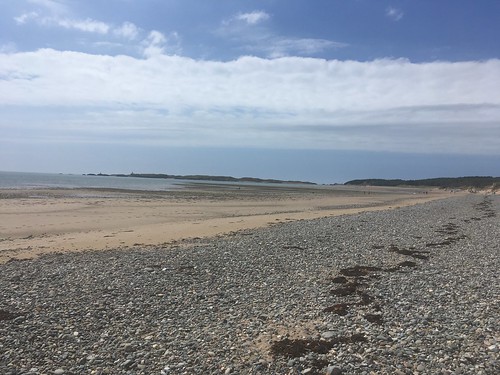 I walked along the beach, and as it was becoming quite hot under the blue sky and blazing sun , I stopped at the main car park for a short rest and to treat myself to an ice cream!

Then I carried on along the beach to Ynys Llanddwyn. In practice it’s more a peninsula than an island as it remains attached to the mainland except for during the highest tides.

Llanddwyn means “The church of St. Dwynwen“, named after the Welsh patron saint of lovers and there’s a ruined chapel and monument tot he Saint towards the end of the peninsula. 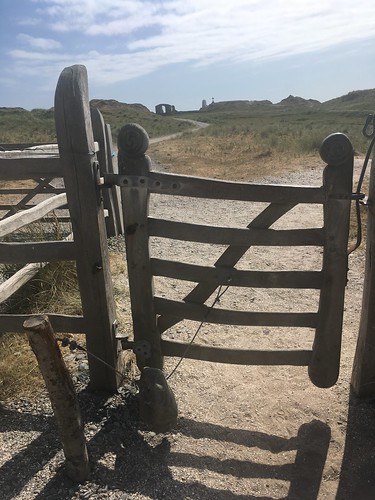 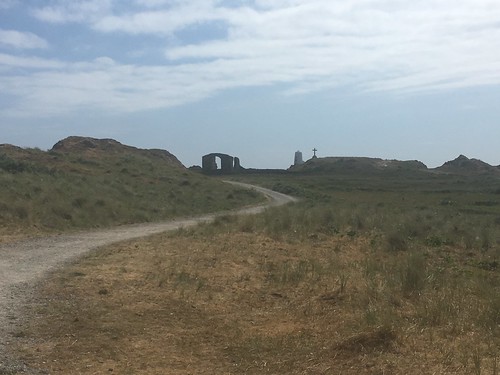 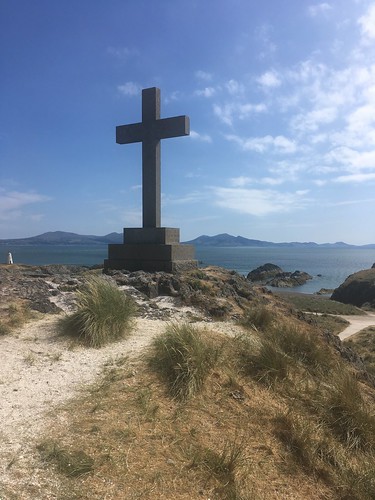 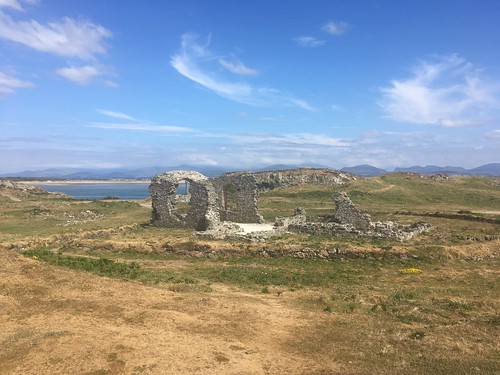 Due to it’s position close to what was a busy shipping lane when slate was shipped from ports along the nearby coast, a beacon, called Tŵr Bach, was built at the tip of the island to provide guidance to ships heading for the Menai Straits. Another more modern lighthouse, Tŵr Mawr, modelled on the windmills of Anglesey, was built nearby in 1845. Cottages were also built nearby for the pilots who guided ships into the Strait. 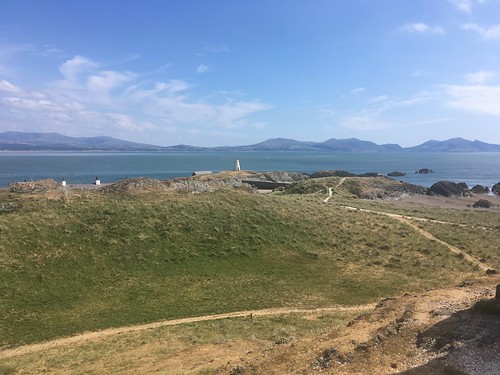 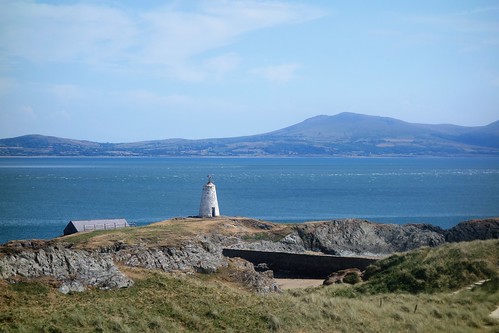 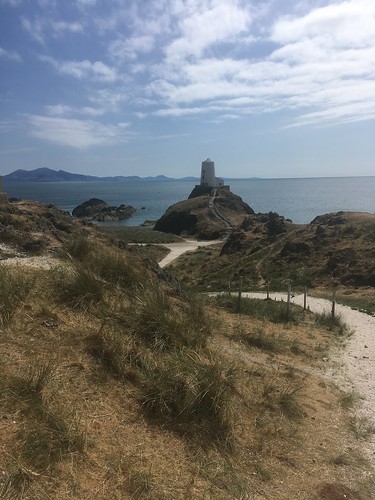 I was a little strapped for time as I had to get over to the campsite where I was staying for the next two nights, near Holyhead at the other end of the island. So I didn’t have time to explore properly. In retrospect I’d have been better parking up in the main carpark and avoided the long walk through the dunes and pine forest at the beginning and end of my walk. But hindsight is a marvellous thing.

So on reaching the monument it was time to turn round and retrace my steps. However, I was able to relish the stunning scenery and views as I walked. 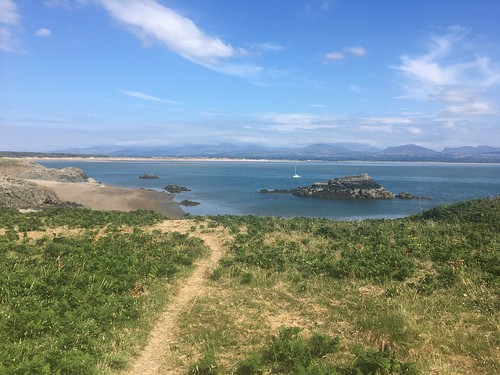 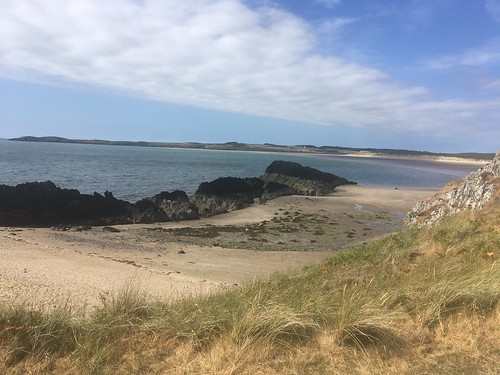 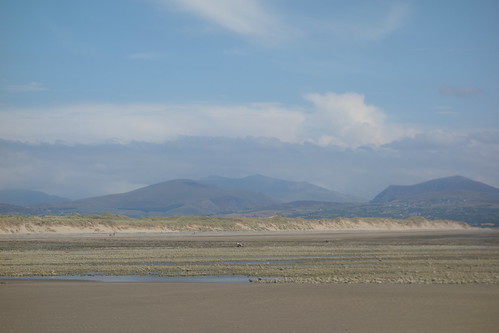 As I got closer to the end of my walk, approaching the car park and looking over the dunes I could see that the cloud had cleared from the northern mountains and Snowdon and the Glyders could be clearly seen in the distance 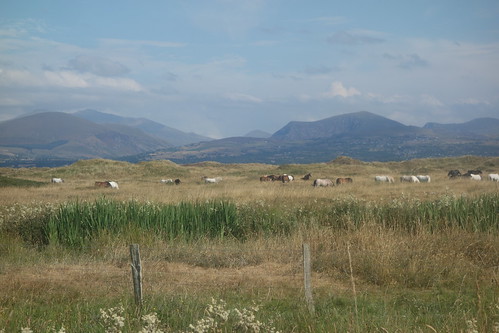