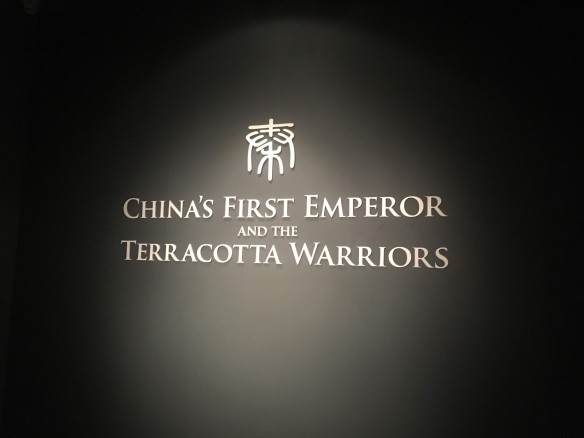 More than 8,000 life-sized Terracotta Warriors have been unearthed in burial pits at the tomb complex of Emperor, Qin Shi Huang, since 1974 near Xi’ in North West China. They’re one of the “wonders of the world” and a small selection of them are currently visiting Liverpool as part as an exhibition at the World Museum in Liverpool.

We went to see the exhibition last Friday evening. It’s proving to be very popular (not surprising really) and tickets have to be booked a few weeks in advance.

My colleague at work was a little scathing as only a relatively small number of the warriors are on display. He felt that the spectacle was in seeing the massed ranks.

Visitors are allocated a time slot but we still had to queue up to wait to get in. First of all you’re shepherded in to watch an introductory film. Personally I didn’t find it very enlightening and don’t think it set the scene particularly well. However it didn’t last too long and we were soon entering the exhibition proper to be greeted by a horse and its groom. 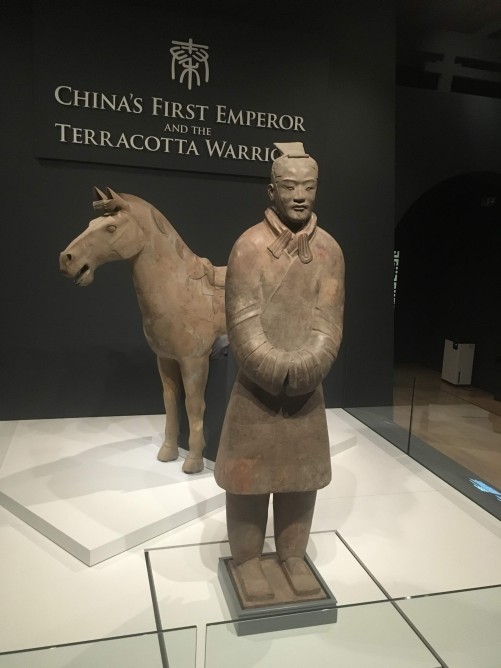 Then into the main part of the exhibition where we learned about how China was unified under the First Emperor and about life in China during his reign. There was a good selection of artefacts on display

Again, we were able to get very close to the figures and inspect their features, clothing, armour etc.

The life-sized figures vary in height, uniform, and hairstyle in accordance with rank. They all have different features although experts have identified 10 basic face shapes.

Although today they appear as terracotta grey, they were original painted in bright colours, like this reproduction on display in the foyer of the Museum,

which has faded and flaked off. However, by getting close it was possible to see traces of the paint. Most of the figures originally held real weapons such as spears, swords, or crossbows, but very few remain as they’ve either been robbed or disintegrated over time.

Here’s a closer look at some of the figures. 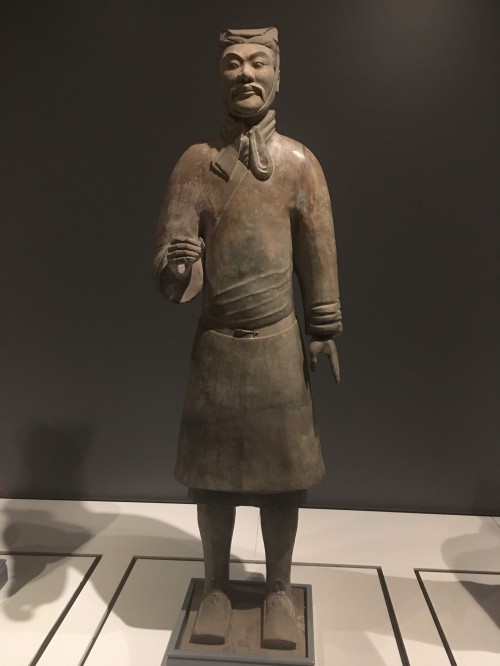 This wasn’t the end of the exhibition. Some high ranking notables and later Emperors also had their own armies created – although these were smaller than life size and not as realistic. 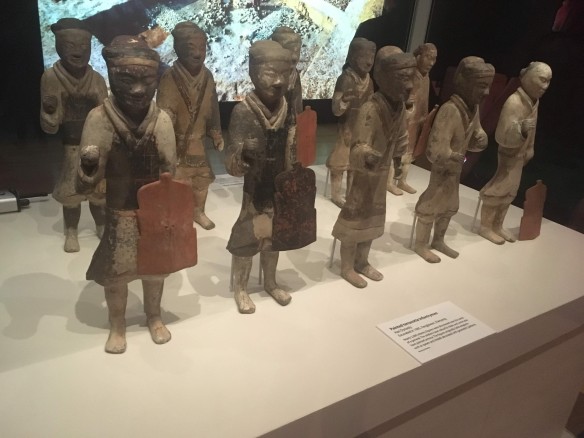 and there was a beautiful golden horse found in the tomb of Emperor Wu, the 5th ruler of the Han Dynasty

Well, despite my colleague’s warning, we were not at all disappointed – quite the reverse. We learned quite a lot about the history of China and the early Emperors, and it was fantastic to be able to get close up to the figures. They were breathtaking.

3 thoughts on “Terracotta Warriors in Liverpool”