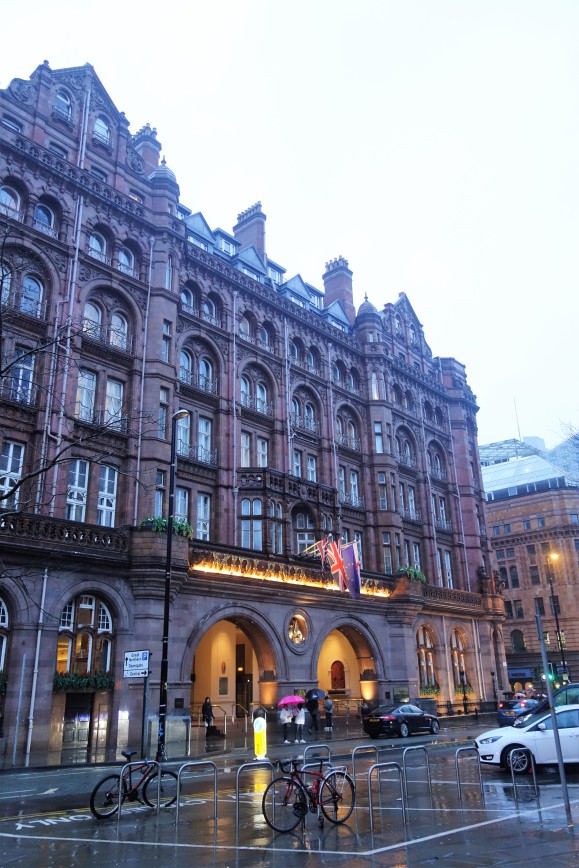 One of my Christmas presents last year was a tour of the Midland Hotel in Manchester. It’s something of an iconic building which I’ve passed many times being on Peter Street, opposite the Central library and near the Bridgewater Hall. It’s also close to the Free Trade Hall (now converted into another luxury hotel) but is where I first started going out to concerts in my mid teens a long, long time ago. The tour covered the history and the architecture of the hotel and was followed by a rather civilised afternoon tea. 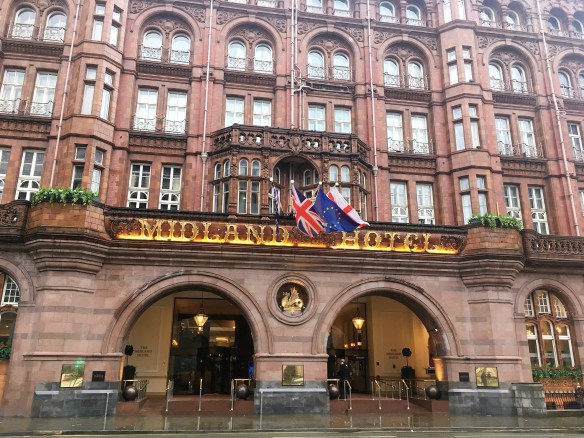 The hotel a large Edwardian Baroque style building constructed on an  “island” in a dominant position facing the former Central Station the northern terminus for the Midland Railway’s rail services to London St. Pancras, which it was built to serve as a railway hotel . The front entrance doesn’t face the station so passengers would have to walk round the building to enter via the grand front entrance. However, there was a covered walkway (long gone) to the rear entrance so porters could bring the wealthy passengers’ bags into the hotel ready for them. 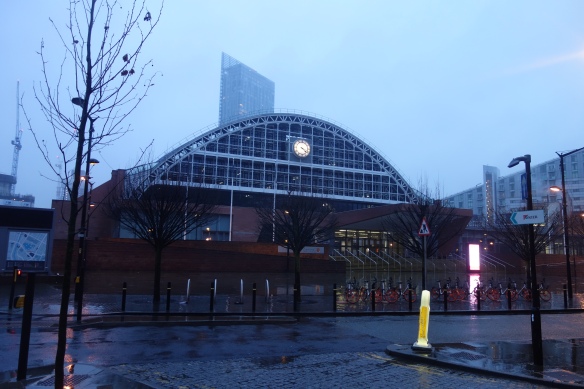 The façade of the hotel is covered with glazed terracotta tiles, which was a common finish on buildings from this period in the industrial north. My home town of Wigan, for example, has quite a number of buildings covered with red terracotta tiles in the town centre. This made the surfaces easy to clean at a time when the air was heavily polluted and light coloured stone would become black in no time at all. I remember many black stone buildings from when I was young which were cleaned up in the 1970’s dramatically changing their appearance. The Midland’s tiles were specially made by Burmantofts Pottery of Leeds, who specialised in architectural facing products.

When the hotel was built, a “Gentleman’s Theatre” occupied part of the site. This had to be demolished but a theatre was incorporated into the building. There are particularly fancy terracotta tiles with sculptures representing the Arts over the windows and doors where this new theatre, now long gone, was located. 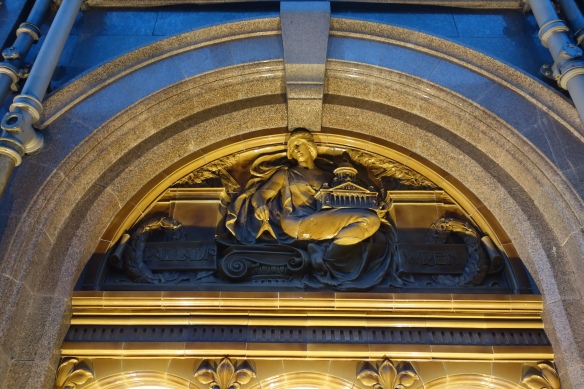 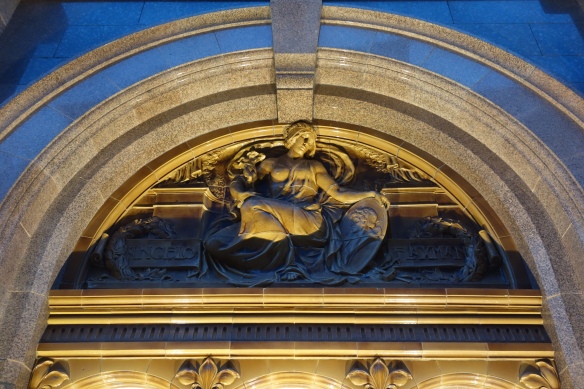 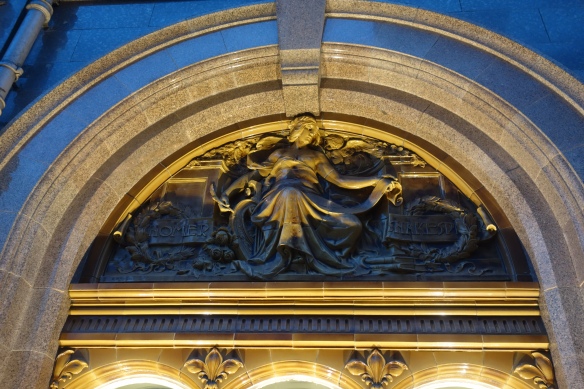 The symbol of the Midland Railway company was the Griffin, and this occurs as a decorative feature inside and outside the building. 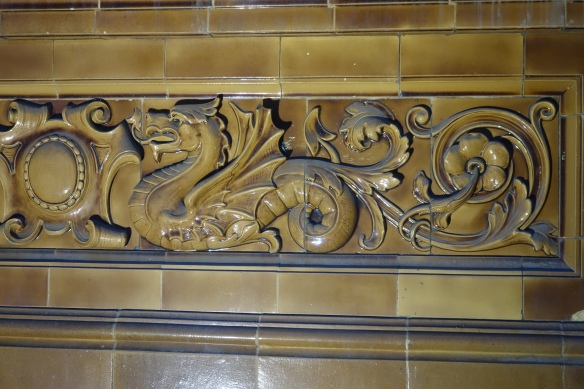 The hotel is renowned as the place where a certain Mr Rolls met a Mr Royce, founding the company that bears their names. 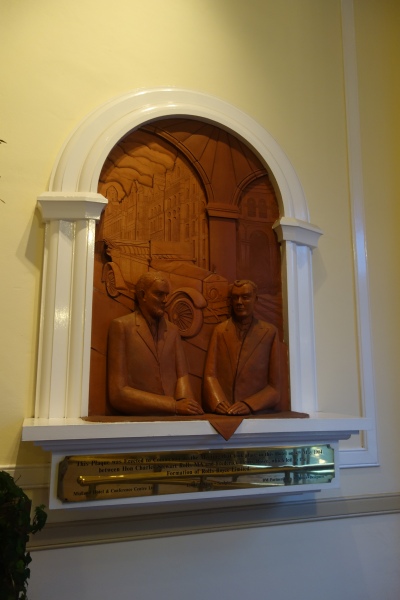 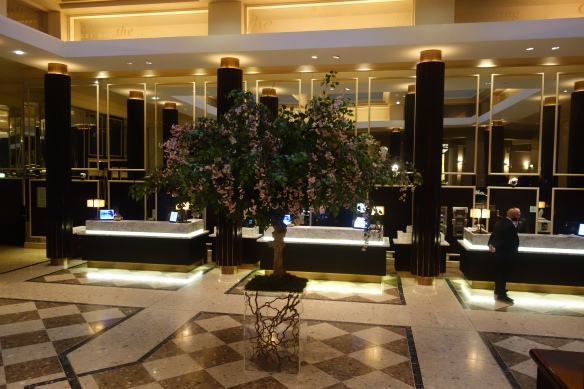 but this area was originally a Winter Garden – the tree in the centre of the lobby no doubt being a reminder of this. 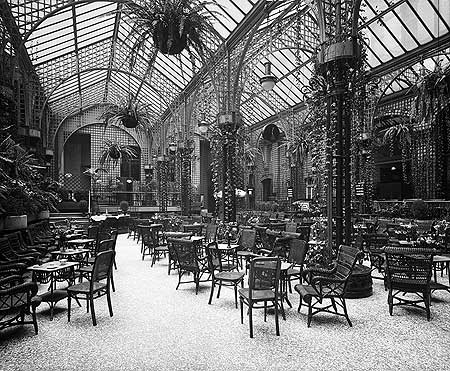 The skylights in the roof are a reminder of this 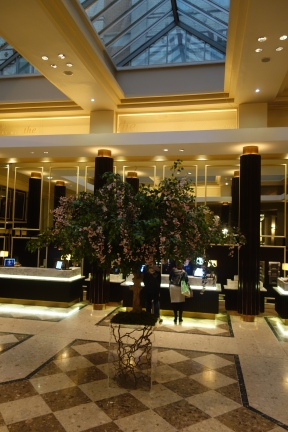 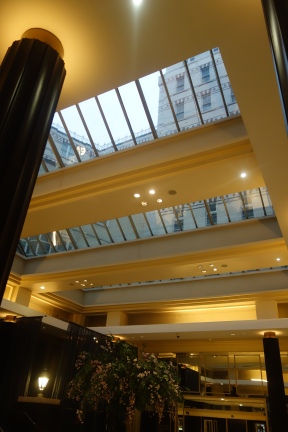 The tour of the building took us into the public rooms used for meetings and the like, some of which had interesting features, as well as one of the bedrooms 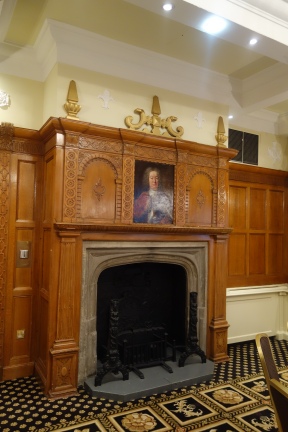 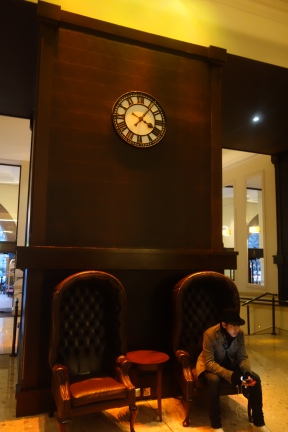 There were decorations on the walls in the corridors which included displays of materials found in bedrooms which had been left behind by guests over the years. These included all sorts – newspapers, magazines, comics, letters, postcards, drawings, maps and all sorts of miscellaneous objects. 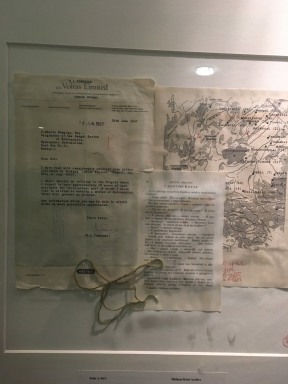 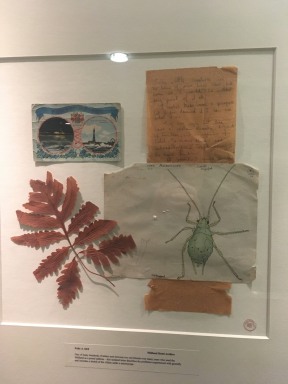 One of the features of the hotel is the Octagon Lounge which originally had a Moorish design with a large lantern hanging from the ceiling. A few years ago it was redesigned and now has an Art Deco look to it. 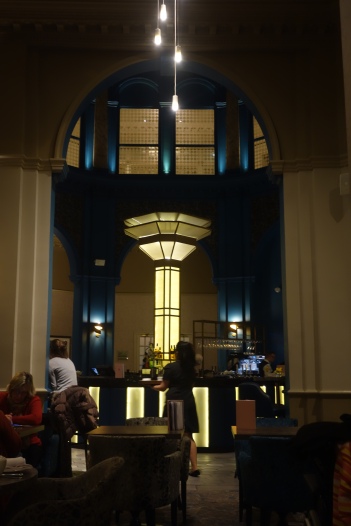 It was an interesting tour and at the end we were able to indulge ourselves with afternoon tea with sandwiches (no crusts!) and scones with cream and jam. 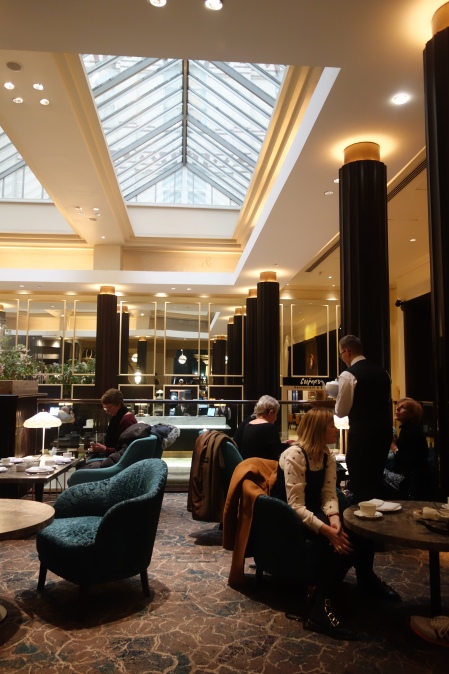 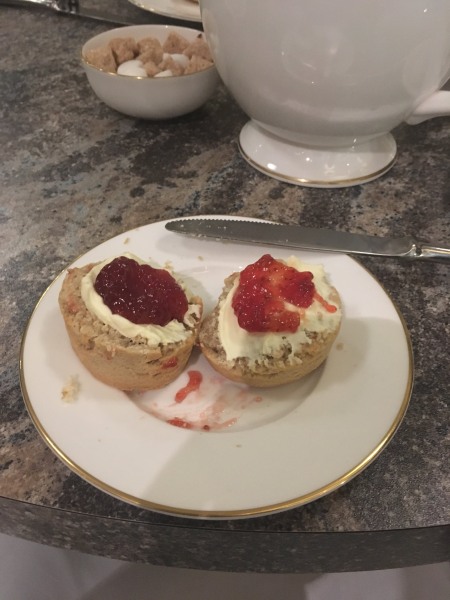 Afterwards we headed over to Home – Manchester’s Contemporary Art, Theatre and Art Cinema complex to watch Three Billboards outside Ebbing Missouri, which we enjoyed very much.

All in all a good afternoon and evening out, despite the weather