Leaving the Vermeer and the Masters of Genre Painting exhibition at the National Galley of Ireland I spotted that there was an exhibition of works by Käthe Kollwitz in the Print Gallery. 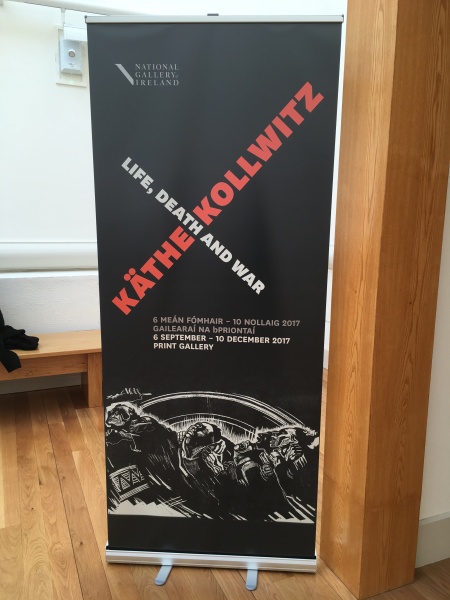 Käthe Schmidt was born in Königsberg, 150 years ago on on 8th July 1867  in what was then in East Prussia (today Kaliningrad, Russia). However she lived most of her life in Berlin where she studied and later married Karl Kollwitz, a doctor living for the half century in Prenzlauer Berg, a working class suburb of North Berlin and one of the city’s poorest neighbourhoods. Her husband worked for a workers’ health insurance fund and often treated the working poor free of charge. Initially trained as a painter, Kollwitz began to focus on the graphic arts – drawing, etching, woodcuts – and sculpture. Influenced by the writings of Emile Zola, her subjects were ordinary people, the downtrodden and the repressed with a particular emphasis on the suffering of women. Her work is dominated by images of death, war and social injustice. 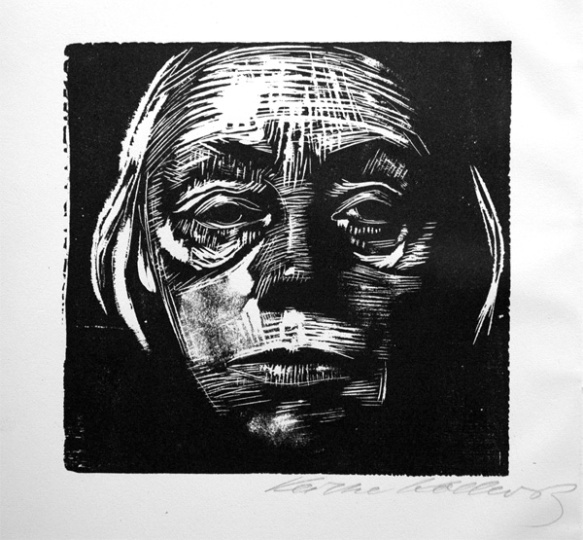 The couple had two sons, Hans and Peter. After the outbreak of WWI, Peter, who was only eighteen, volunteered for the German Army. He died on the Western front in 1914, soon after he’d arrived and this left an indelible impression on Käthe who had persuaded her husband to allow the 18 year old to enlist.

The exhibition features 38 prints and drawings from the Staatsgalerie Stuttgart, Germany along with two lithographs from the National Gallery of Ireland’s collection. It includes two of her print cycles, Peasant War and War, and a number of what are described as “honest” self-portraits. 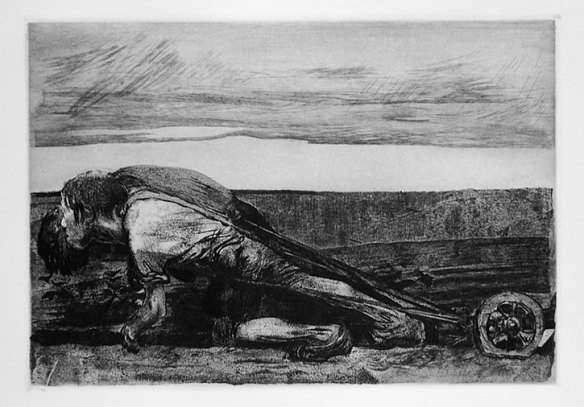 The Plough from the Peasant War  series

Kollwitz’s dark images were a stark contract to the paintings I’d just viewed of domestic scenes from well off middle class life during the Dutch Golden Age. They portrayed the reality of life for people living in poverty, in harsh conditions and suffering the impact of war.  And although she worked during the first half of last century they remain relevant today. Her images of the impact of war could have been created in Syria, Yemen, Iraq, Afghanistan and poverty still exists even in Europe and America. 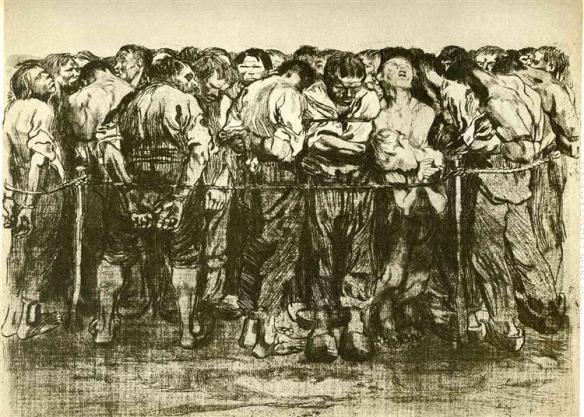 The Prisoners from the Peasant War Series

As it’s the 150th anniversary of her birth there’s been a number of articles about her life and work. A number I’ve read question her political commitment and see her as an outsider, even something of a voyeur – observing the life of workers and their families but with no real commitment to social justice. Personally, I find that difficult to believe. Her work shows a passion that must be based on sympathy and a desire for change. 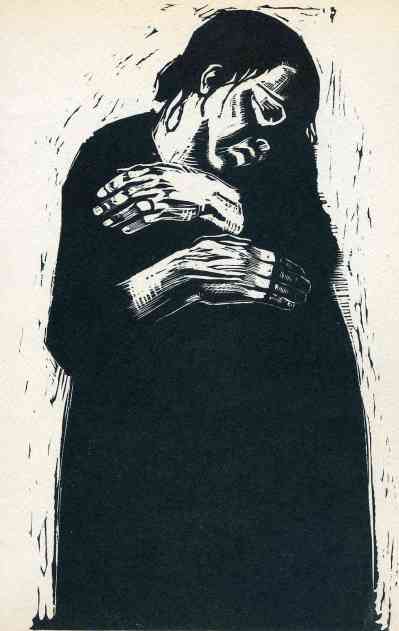 The Widow I from the War series of woodcuts

An indictment of the social conditions in Germany during the late 19th and early 20th century, it’s impossible for anyone with a social conscience and a feeling for social injustice not to be moved by her stark black and white images.

17 thoughts on “Käthe Kollwitz: Life, Death, War at the NGI”