his unforgiving depiction of Weimar Society and the Great War from whence it was forged. Along with George Grosz and Max Beckmann, he is  considered one of the most important artists of the Neue Sachlichkeit. (www.ottodix.org)

Dix was a key supporter of the New Objectivity (Neue Sachlichkeit) movement, a name coined after an exhibition held in Mannheim, Germany in 1925. Described by art historian G.F. Hartlaub, as ‘new realism bearing a socialist flavour’, the movement sought to depict the social and political realities of the Weimar Republic.

The exhibition includes a large number of his paintings and an important series of prints together with some contextual materials. Consequently it’s a good survey of his work.

The first section of the exhibition concentrates on his paintings and watercolours depicting the “underside” or the fringes of society. They’re quite brutal caricatures that don’t pull any punches. But they show quite a different side of Weimar Germany than August Sander’s photographs of more ordinary “mainstream” people taken during the same period. As the Observer’s reviewer puts it

Dix’s Weimar is a nightmare of raddled prostitutes, drunk customers and violent sailors, of rape, murder and maggot-ridden skulls.

Reclining Woman on a Leopard Skin (1927)

Dix’s paintings are fiercely indigestible; you are meant to look at the livid cheeks and poisonous impasto and recoil. He believed in the disruptive power of ugliness.

Dix had volunteered at the outbreak of the First World War and served as an artilleryman and machine gunner on the Western Front, where he took part in the Battle of the Somme. In 1918, weary of trench fighting he volunteered as an aerial observer and trained as an aeroplane pilot. He was traumatised by the war and suffered recurring nightmares. His world view was coloured by these experiences which are depicted in a series of 50 etchings, many of which which don’t make comfortable viewing. I felt they were the most affecting part of the exhibition.

After viewing the horrors of war so graphically portrayed in the etchings, the next section of the exhibition brought us back down to earth with a series of more sober (a relative term when considering Dix’s work) portraits.

This was a major source of his income during the 1920’s. His style was a mixture of realism and caricature, both old fashioned and avant-garde, as we can see in this example 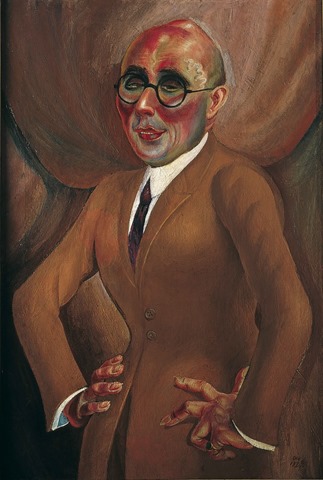 Portrait of the Jeweller Karl Krall (1923)

Portrait of the Photographer Hugo Erfurth with Dog (1926)

He painted them using the techniques used by the Renaissance “old masters”. This involved using a layering effect, with egg tempera  finished with oils. There was a video on display of an old film which showed him “in action”.

The final section of the exhibition showed a different aspect of the artist with paintings of his family and a series of 14 watercolours painted in 1925 for a picture book for his five-year-old stepdaughter, Hana Koch. The subjects of these watercolours include mythical and biblical figures and stories such as St George fighting the dragon, St Christopher, Jonah and the whale, and David and Goliath.