We arrived on Holy Island, also known as Lindisfarne, around midday. We could have picked up the car and our luggage and headed home but had decided to stay the night on the island and had rooms booked in the Ship Inn. Due to the tide times we couldn’t leave until just after midday the next day, so we had about 24 hours to look around. Luckily the weather held with rain overnight and early morning, but it had finished by the time we’d had our breakfast, checked out and loaded up the car so it was dry while we spent our last few hours mooching around.

Holy Island is a major tourist attraction and gets very busy during the periods when travel across the causeway is possible. However once the tide starts coming coming back in the hordes depart leaving the island very quiet indeed. Wandering around in the evening and morning rather reminded me of the time we spent at Portmerion in Wales where hotel guest have the village to themselves after the day visitors have left.

Lindisfarne, as the island was originally known, was an isolated island off the coast of an isolated region – Northumbria until a monastery was founded by the Irish monk Saint Aidan, from Iona off the west coast of Scotland  at the request of King Oswald. The monastery became an important base for Christianity in the north of England which might seem strange given its seemingly isolated position. But it must be remembered that in those times travel over land was extremely difficult and communication was largely by sea. Lindisfarne was well positioned for that.

St Cuthbert came to Lindisfarne in around 665 as prior. In 684 he was made bishop of Lindisfarne but by late 686 resigned and became a hermit, initially on St Cuthbert’s Isle, traditionally located just of the main Lindisfarne island and then on Inner Farne Island (two miles from Bamburgh, just down the coast), which was where he eventually died in 687. He was buried at Lindisfarne. Miracles were soon reported at St Cuthbert’s shrine and Lindisfarne was quickly established as the major pilgrimage centre in Northumbria. 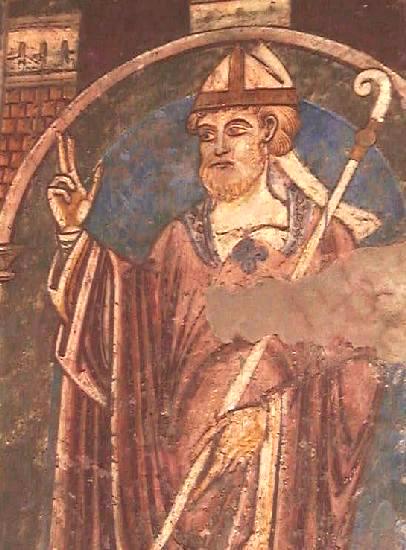 Lindisfarne remained an important Christian centre until the Viking raids started in the 9th century. In 875 the monks abandoned the island taking with them the body of St.Cuthbert, together with other relics and treasures which had survived the Viking raids. After the Norman Conquest a Benedictine community was established on Lindisfarne, which now also became known as ‘Holy Island’. The current Priory dates from this period.

This statue to St Aidan is located inside the churchyard, outside the Priory walls 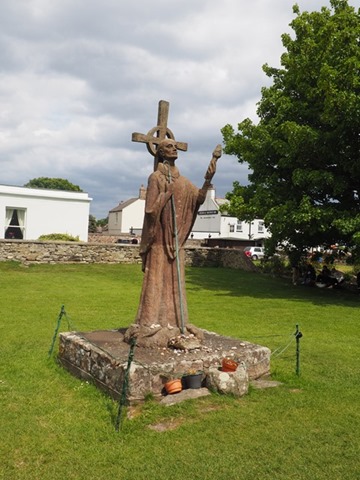 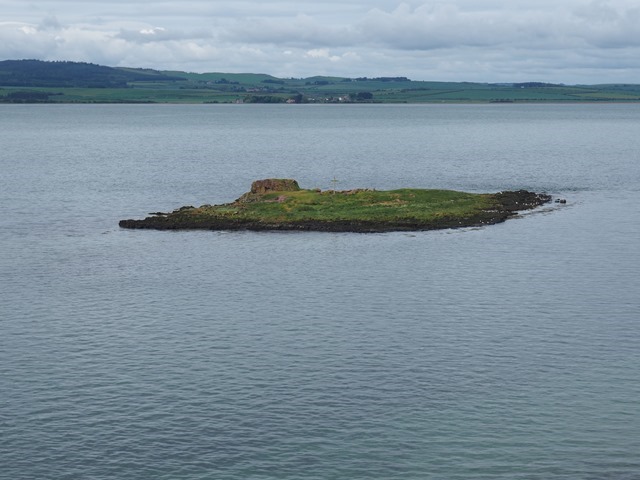 There’s a small community that lives on the island but I guess that a good proportion of the attractive buildings are holiday cottages. 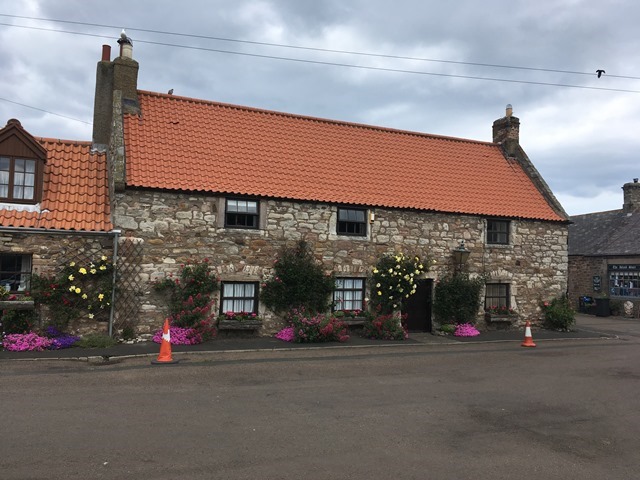 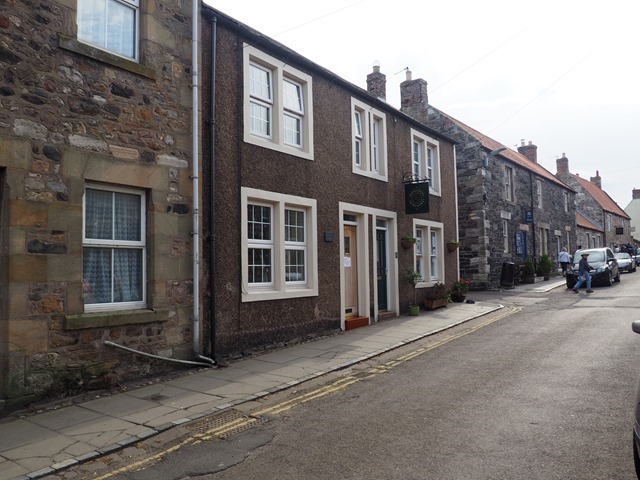 Lindisfarne Castle, which is owned by the National Trust, is currently undergoing major restoration work so we couldn’t visit.It was built on the highest point of the island, a whinstone hill called Beblow, between 1550 and 1570 as a fort and was home to temporary garrisons of soldiers on detachment from the larger force based at nearby Berwick. In 1901, long abandoned as a military outpost, it was bought by Edward Hudson,  the owner of Country Life magazine, for use as a holiday home. He had it refurbished in the Arts and Crafts style by Sir Edwin Lutyens.

He also had a walled garden created by Gertrude Jekyll, who was a friend of Lutyens, between 1906 and 1912. It’s a short distance from the castle building and had originally been the garrison’s vegetable plot. It was open and free to visit (although we are members of the National Trust) so we went and had a look.

Being early in the season for such a bleak and windswept location, the flowers were only just starting to come into bloom. It will look better in a few weeks time. 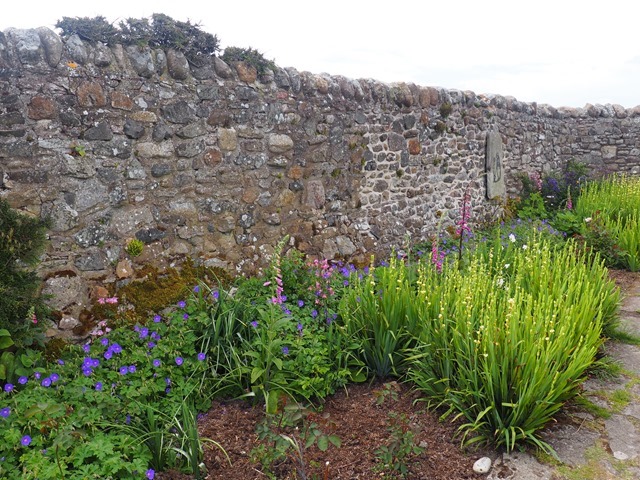 I liked this little monument to Gertrude Jeckyll

After we’d looked around the garden we continued along the path towards the sea. We were quite amazed to see lots and lots of small cairns and other structures made from rocks and pebbles from the beach which had been built along a grass ridge running next tot he beach. 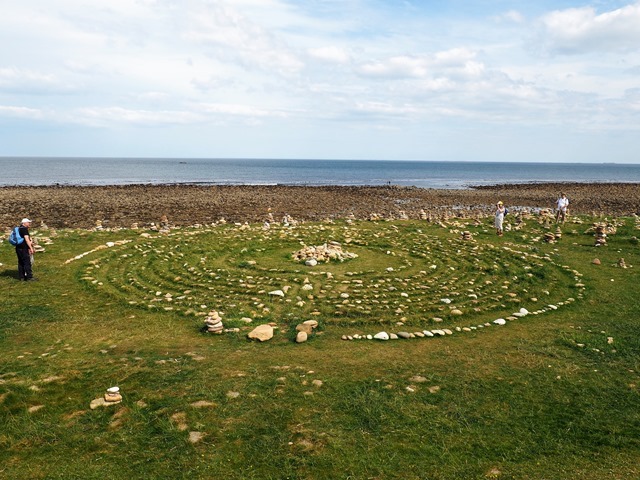 There was even a mermaid 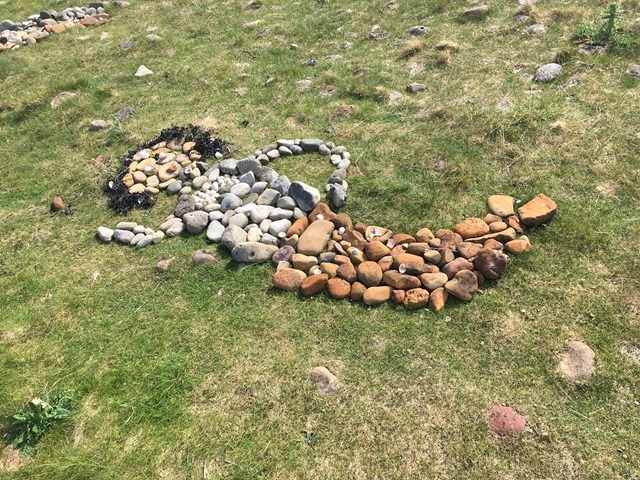 We made our own modest contribution to the vast collection, and then carried on down to the beach.

It was a fine day and we could see Banburgh Castle and the Farne Islands over on the horizon.

Turning back inland towards the castle, we could see the old lime kilns. 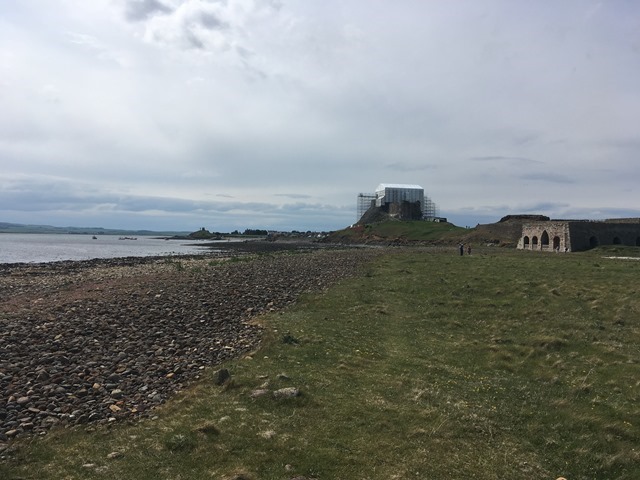 There had been small scale lime production on the island since the end of the 18th Century and these much larger industrial scale kilns were constructed in 1860 and were operated until the beginning of the 20th Century.

Being interested in industry and industrial history it was good to get inside and have a close look.

It would have been like Dante’s inferno working on the kilns with the high temperatures, dust and fumes.

We headed back past the castle returning to the village.

Time for a welcome cold drink at the Ship Inn

The next morning we had a couple of hours to look round the island before the causeway opened.

We had a look around the harbour. I rather liked the way upturned boats were used as huts! Rather like Great Expectations.

We walked over to the Heugh, a rocky outcrop. 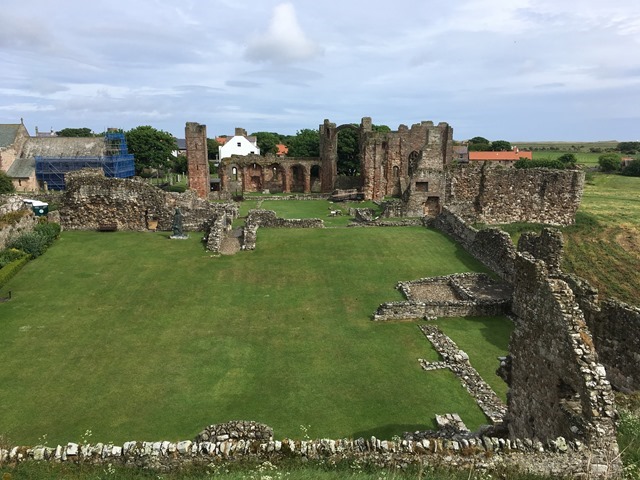 We walked past St Mary’s church

and had a look inside (another post, I think!)

and then past St Cuthbert’s United Reform Church

I rather liked this sculpture on the outside of the building

We walked into the village and had a look round some shops and then went for a coffee in an excellent little coffee shop. 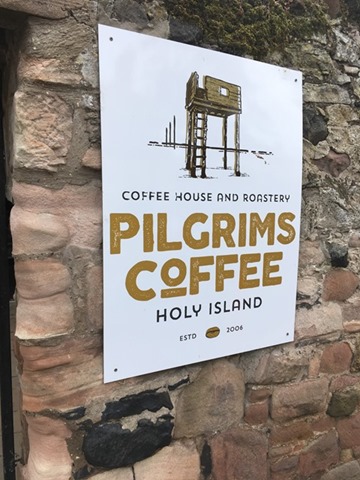 Watch out for the sparrows and other small birds in garden. They’re not shy at hoovering up crumbs and trying to pinch food from the tables.

After we’d finished we could see delivery vehicles arriving in the village. It was time to return to the car and drive over the causeway and head back to Morebattle where we’d started our journey to pick up D’s car.

I’m glad we took the opportunity to stay on the island rather than rush back after we’d finished our walk. It allowed us to explore properly and enjoy the peace and quiet while the day visitors had gone back over the causeway.