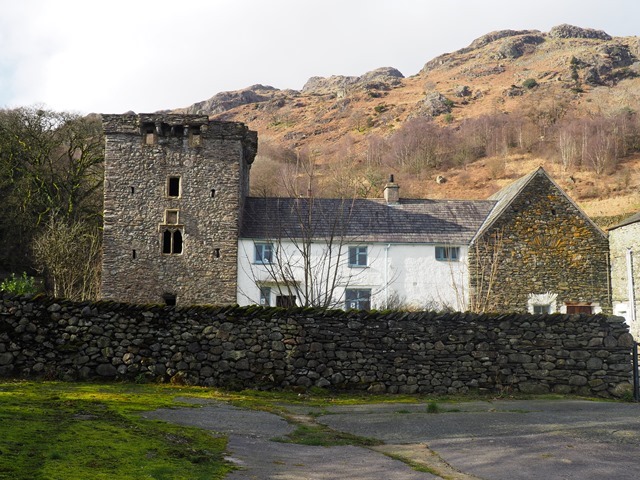 This is Kentmere Hall. It’s a 14th century tunnel-vaulted pele tower which had an extension built on the side during the 15th or 16th century. Today it’s used as a farmhouse.

Pele towers were defensive structure to protect the local population from marauding Scots and Border Reivers.

They were small stone buildings with walls from 3 to 10 feet thick, square or oblong in shape. Most were on the outskirts of the Lake District, but a few were within its boundaries. Designed to withstand short sieges, they usually consisted of three storeys – a tunnel-vaulted ground floor which had no windows which was used as a storage area, and which could accommodate animals. (source)

Today some, like the one at Arnside, are in ruins, others, like at Sizergh and Muncaster, were extended and incoprorated into grand houses while the one at Kentmere was extended to become part of the residence of the local big wigs, the Gilpins. 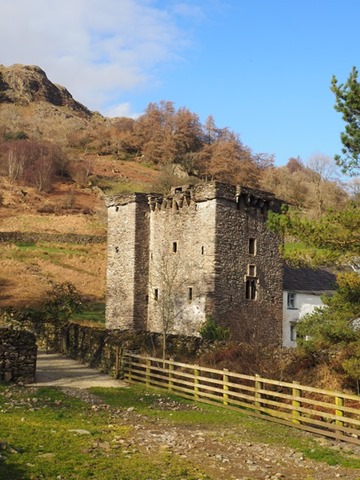 There’s a good paper about the Hall published by the Staveley and District History Society.

Today the Hall is part of a working farm. Returning along the road back towards the church and Capplerigg, we passed a large barn full of sheep – obviously a lambing shed with the ewes brought down from the fells ready to give birth. Hearing a loud high pitched bleating we peeped inside to see a new born lamb.