Our last day in Northern Ireland. Our ferry to Liverpool didn’t leave until 10:30 in the evening for an overnight sailing, so we took the opportunity to visit Belfast. Driving into the city we passed Stormont, the home of the Northern Irish Assembly and decided to stop to take a look. We parked by the entrance to the estate, at the bottom of the mile long, tree lined, Prince of Wales Avenue which runs from the Upper Newtownards Road to the Parliament Buildings. We walked up the avenue right up to the foot of the steps of the building, passing the statue of Lord (Edward) Carson by L.S. Merrifield.  Carson was leader of the Irish Unionist Alliance and Ulster Unionist Party between 1910 and 1921,and led opposition to Home Rule for Ireland. The statue was financed by public subscription and unveiled in June 1933. 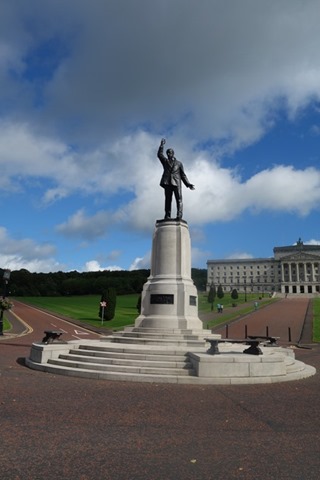 It’s an impressive building, completed in 1932. The architect was Sir Arnold Thornely, who was based in Liverpool. He designed the building with perfect symmetry and symbolism, such as the building being 365ft wide representing one foot for every day of the year; having six floors and six pillars at the entrance, one for each county in Northern Ireland.

It originally was home to the Parliament of Northern Ireland which was created under the Government of Ireland Act 1920, after 6 of the counties of the Irish province of Ulster had voted to remain part of the United Kingdom when Ireland was given independence from British rule. The Parliament was dissolved with the imposition of direct rule from Westminster March 1972 at the height of “the Troubles”. It was also home to the short-lived Sunningdale power-sharing executive in 1974.

Following the Good Friday Agreement, signed on 10 April 1998, a new single chamber Northern Irish Assembly was established. Elections were held on 25 June 1998 and the New Northern Ireland Assembly met for the first time on 1 July 1998 . Politics are complicated in Northern Ireland and the new Assembly was suspended in October 2002 but after negotiations it was restored on 26 March 2007. 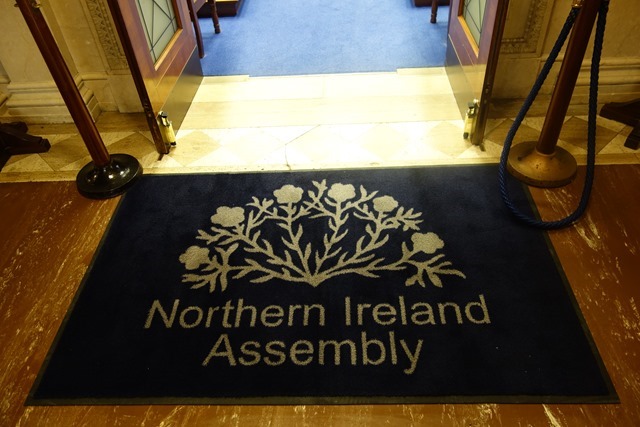 Today, the Assembly is responsible for making laws on transferred matters in Northern Ireland and for scrutinising the work of Ministers and Government Departments.

There are free guided tours of the building Monday to Friday at 11.00am and 2.00pm and during Summer recess tours are  available every hour on the hour from 11:00am to 3:00pm. So we decided to to take advantage of this.

After passing through security we walked round to the front entrance of the building and entered the Great Hall which is clad in Italian travertine marble.

We met up with our tour guide who gave us a history of the building and pointed out some key features of the hall. For example he told us that the very grand blue, red and gold painted ceiling of the Great Hall hasn’t been touched since it was first painted in 1932 as a special paint, formulated by Heaton, Tabb & Co. of London, was used.

Hanging from the ceiling is a grand chandelier, originally hung in Windsor Castle, where it had been a gift of Kaiser Wilhelm II of Germany. It had been sent to Belfast for safe keeping during WW1 and it had never been returned! Two smaller versions, produced in the Harland and Woolf shipyards, hang to either side.

Next we moved through to the Senate chamber, passing through an ante-room where there are portraits of two of Northern Ireland’s literary greats – C S Lewis and Seamus Heaney – painted by Ulster artist Ross Wilson

Each portrait bears a famous quotation from the respective writers which have particular relevance to the Northern Irish peace process.

We then moved into the Senate chamber itself, with its red leather adversarial seats in two parallel blocks of benches remains as it was originally designed.

As the Northern Irish Assembly doesn’t have a higher House, the Senate chamber is now used as a committee room.

There are two notable painting hung in the room. One by William Conor of the opening of the Northern Irish Parliament in 1921 which took place in Belfast Town Hall.

The other is by Belfast artist Noel Murphy. ‘The House will Divide’, shows all the Members elected in 1998 to the Northern Ireland Assembly.

There were several well known faces – in the painting, that is.

We then moved across the building into the Assembly chamber

In the ante-room, this sculpture commemorates the historic Hilsborough agreement, that allowed the devolution of policing and justice powers to the Northern Ireland Executive. 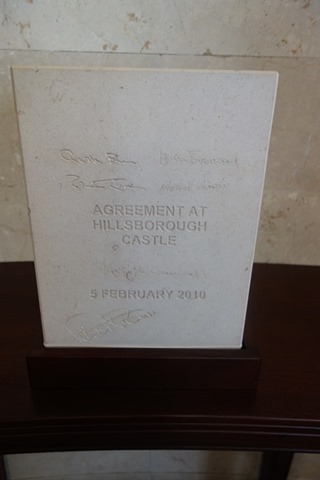 It’s much more modern than the Senate chamber, having been reconstructed and refitted following a major fire caused by an electrical fault, on 2nd January 1995 which destroyed the Assembly Chamber.

There are 108 Members of the Legislative Assembly (MLAs), 6 from each of the 18 electoral constituencies in Northern Ireland.

Unlike Westminster where the Government and Opposition face each other in the Northern Irish Assembly chamber a Scandinavian model has been used with the benches in a horseshoe in an attempt to reduce adversity and conflict.