The Whitechapel Gallery is open late on a Thursday evening so after we’d been to the Courtauld, we headed over to the East End to take a look at the exhibition of abstract art that had only opened that day.

This was my third visit to the Gallery in the past 12 months, having never visited before last February. The original gallery is an Art Nouveau / Arts and Craft building which has a lovely metallic frieze of leaves and branches by Rachael Whiteread high on the facade. The gallery was founded  1901, intended to bring art to the working classes of East London, and was one of the first publicly funded galleries for temporary exhibitions in the Capital. In 2009 it was extended to incorporate the building next door, a former library. 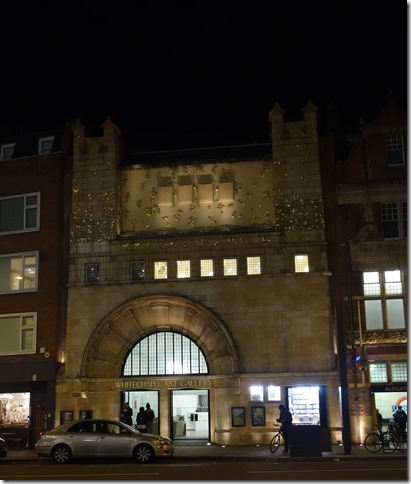 Today the Gallery focuses on the work of modern and contemporary artists. Their exhibitions can be challenging, and are not always easy viewing, but they make you think. I’ve enjoyed all three visits even if I haven’t always enjoyed everything I’ve seen.

At the moment they the main exhibition is Adventures of the Black Square (paid entry) with five other smaller free to enter exhibitions also showing. We spent a few hours there, grabbing a tasty, light evening meal in the cafe. By the end we were pretty much “arted out”.

According to the Gallery’s website, the Adventures of the Black Square: Abstract Art and Society 1915–2015  exhibition

takes Kazimir Malevich’s radical painting of a black square – first shown in Russia 100 years ago – as the emblem of a new art and a new society. The exhibition features over 100 artists who took up its legacy, from Buenos Aires to Tehran, London to Berlin, New York to Tel Aviv. Their paintings, photographs and sculptures symbolise Modernism’s utopian aspirations and breakdowns.

Starting with a painting by Malevich of a black rectangle there was an enormous number of works displayed in two large rooms and a third smaller one, all linked by by a geometric, abstract theme.

‘Utopia’ is expressed through Malevich’s black square, the progenitor of new aesthetic and political horizons, seized by artists from Vladimir Tatlin to Hélio Oiticica.

‘Communication’ spreads the message to the masses in manifestos and avant-garde graphics.

The ‘Everyday’ embeds routines and objects in the aesthetics of progress as observed in a textile by Sophie Taeuber-Arp or the abstract motifs painted on Peruvian lorries captured by Armando Andrade Tudela. Middle Eastern artists such as Nazgol Ansarinia link Modernism with Arabic and Persian decorative arts; while Western artists such as Lewis Baltz, Peter Halley orJenny Holzer critique economic and political abstraction. Adventures of the Black Square explores how abstract art has travelled worldwide, permeating our life and times. 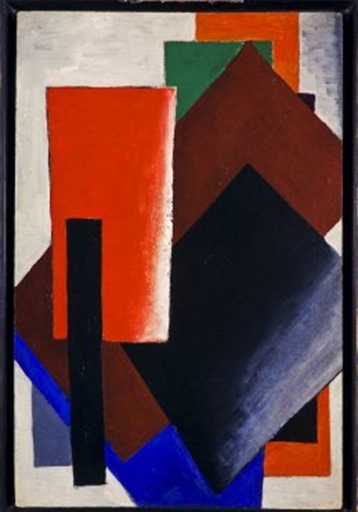 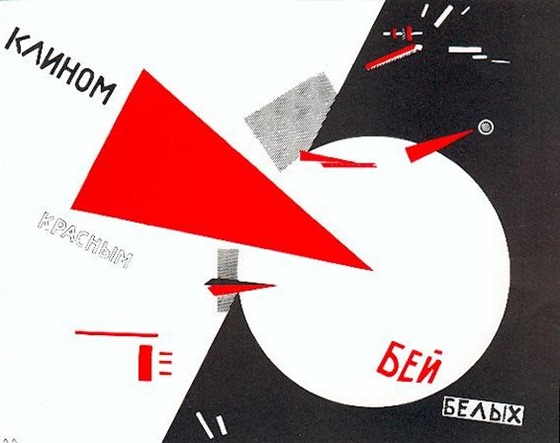 Beat the white with the Red wedge (1920) El Lissitzky

Over the past couple of years I’ve visited exhibitions of works by Maelevich (Tate Modern), Mondrian (Tate Liverpool), Saluoa Choucair (Tate Modern),  Nasreen Mohamedi (Tate Liverpool) Hélio Oiticica (Irish Museum of Moden Art) and seen works by Moholy Nagy, Josef and Anni Albers and others associated with the Bauhaus in Dessau, Berlin and elsewhere. And here they all were with works featured prominently in this exhibition. That must say something. These paintings and drawings based on geometric shapes and patterns, and photographs with a strong geometric emphasis by photographers from Russia, Germany and Brazil, clearly appeal to me.

There was a lot to take in. We went round twice, revisiting works we particularly liked. I think that my favourites were mainly in the room on the ground floor, but some of the more modern works exhibited in the upstairs gallery were also interesting.