A pleasant surprise when we were visiting Dove Cottage and the associated Wordsworth Museum (which is interesting in itself) was an exhibition inspired by William Wordsworth and the Japanese master of the Haiku, Basho, on the ground floor of the museum. Both poets, famous in their native lands, were keen walkers. Perhaps another connection is that Wordsworth is particularly popular with Japanese tourists to the Lake District!

The Wordsworth Trust’s website explains what the exhibition is about

This exhibition features manuscripts and early printed editions of work written by Matsuo Bashō, William Wordsworth, and Wordsworth’s sister Dorothy, who is now recognised as a significant writer in her own right.

The exhibition also features new works by contemporary artists working in a wide range of media, responding to the manuscripts and what originally inspired them in ways that are as fresh, creative and radical now, as Wordsworth and Bashō were during their lives. 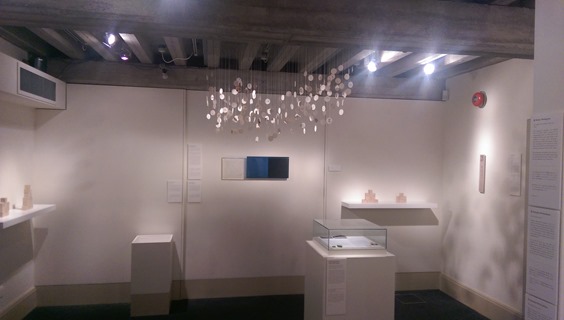 Old manuscripts don’t hold much fascination for me but those of Basho’s works, decorated with drawings and with the Japanese characters themselves a form of visual art in themselves. And writing, or, rather, calligraphy, in the Latin alphabet can also be beautiful. In this exhibition many of the works were created using words in imaginative ways to create visually pleasing and interesting images. And when looked at with an open mind, even the manuscripts by the Wordsworths (William and Dorothy) had a visually interesting quality, their scribbles looking rather like abstract designs.

One of the artists, Mike Collier, even took scanned extracts of Dorothy’s journal  describing some of her favorite walks as his starting point, applying marks with coloured pastels.

Some of the artists created pictures using only words, such as the ghostly language of ancient earth, a 3-D interactive digital map of Grasmere and the surrounding area “drawn” using extracts from Wordsworth’s The Prelude by Andrew Richardson.

Other works used words to create patterns, including two pieces by Richard Skelton. In Still guides the stream he  takes William Wordsworth’s River Duddon sonnets and removes the “water words” resulting in gaps in the text which render it meaningless. The second part of this work is a “negative” of the first with the “water words” reinserted but the rest of the text removed. Vey clever.

This piece, Drifting by Ayano Tani, has an extract from Wordsworth’s Daffodils engraved on glass. The light shining through casting shadows on the wall behind, 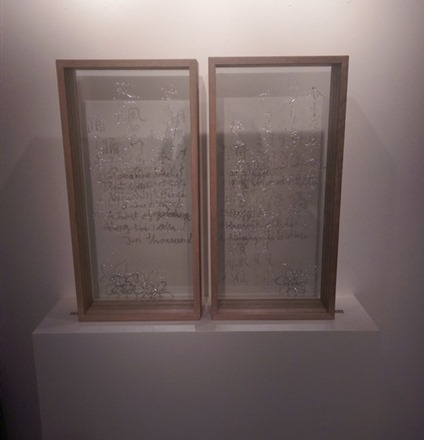 Two other works made of glass were created in partnership by Inge Panneels and Minako Shirakura. Although the former was in the UK and the latter in Japan they worked collaboratively via email and Skype. The wonders of modern technology! This piece is Wanderers of the Earth: Walk and includes words by Wordsworth and Basho from poems referring to stars on three coloured glass tiles.

Another collaboration by the calligrapher Ewan Clayton and Japanese paper artist Nao Sakamoto produced this paper hanging scroll, coloured and decorated with gold and silver leaf with extracts from poems by the two poets. The piece is titled Infinite imagination: two poets at night, the moon on Mount Snowdon; the Milky Way over Sado Island

These are just some of the works. But there wasn’t an exhibit I didn’t like. There was a Japanese, Zen like quality, to the exhibition. In her blog post on her visit to see it, Inge Panneels comments that

all the work exhibited sits beautifully together, in an understated quiet way.

and that sums up my feelings too.

2 thoughts on “The Walking Poets”