Across the road from the Scloss Charlotenburg in Berlin, facing each other on opposite sides of the Schloßstraße, are two Galleries that are part of the Staatliche Museen zu Berlin – the Sammlung Scharf-Gerstenberg Museum and the Berggruen Museum.

The  works displayed in the Sammlung Scharf-Gerstenberg Museum  were collected by Otto Gerstenberg and his grandson Dieter Scharf. It consits of a large number of works by Surrealists and precursors to surrealism such as Goya. More about the permanent collection in another post but during our visit the temporary exhibtion at the museum concentrated on the works of Paul Klee.

Last summer we’d visited the Berggruen Museum to look at their collection of works by Picasso, Matisse, Giacometti and others. And during that visit I really discovered the work of Paul Klee. Although I’d heard of him before the visit I’d never really paid much attention to his work, but while wandering round the Berggruen I found myself becoming more and more fascinated by his work – the brightly coloured, small scale pictures, painted in different styles, that occupied room after room in the Gallery. After the visit I wanted to find out more  and subsequently was pleased when I had the opportunity to go to the exhibition of his work at the Tate Modern in London earlier this year.

The temporary exhibition, Les Klee du Paradis – Paul Klee in the Collections of the Nationalgalerie, features the 70 works from the Berggruen Museum together with another 30 or so from Scharf-Gerstenberg’s collection plus other works by Klee from the Neue Nationalgalerie. It was a comprehensive exhibition covering the period when Klee’s was a Master at the Bauhaus in Weimar and Dessau, some early, Symbolist-inspired works, as well as some works from later in his career.

‘Les Klee du paradis’ means ‘The Klees of paradise’. At the same time, the name ‘Klee’ sounds similar to the French word for ‘key’ (clé). This homage to Heinz Berggruen, who was born in Berlin 100 years ago on 6 January 1914, thus promises to hold the ‘the keys to paradise’.

Paradise indeed. A marvellous exhibition. Not a duff paining in sight. These were some of my favourites 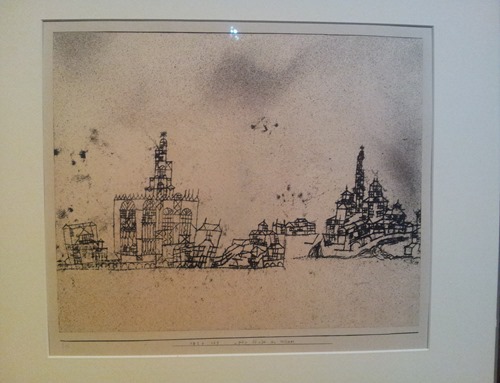