While taking the bus between Heuston station and my hotel near the Grand Canal on the edge of Ballsbridge I spotted that that there were a couple of exhibitions on at the National Library of Ireland – one about the 1913 Lockout and another about WB Yeats. I decided to visit them on my last day in Dublin.

They were both good. The W B Yeats exhibition was in the main building, which was architecturally interesting in it’s own right.

The National Library of Ireland

I don’t know a great deal about Yeats, but like some of his poetry. So I found out quite a lot about him from the exhibition. (There’s also an Online version )

Yeats was a major figure in Irish Literary history – associated with the Irish Literary Revival, one of the founders of the Abbey Theatre and was awarded In  the Nobel Prize in Literature in 1923. He had a life-long infatuation with Maud Gonne who inspired many of his poems. A supporter of Irish independence, he served as a Senator for 6 years from 1922, on the foundation of the Irish Free State. Interested in Irish myths and legends he dabbled in mysticism, spiritualism, occultism and astrology. All of these facets of his life were covered by the exhibition.

During the 1920’s and 1930’s he expressed sympathy and support for fascist ideas and regimes. This was discussed by George Orwell in an article published in the literary journal Horizon in 1943. But there was no mention of this in the exhibition. This aspect of his character makes me feel uneasy, especially as I like a number of his poems. Reconciling work you admire with the views or acts of the artist isn’t always easy.

Close to the entrance there was a multimedia area where visitors could sit and listen to recordings of some of his more well known poems read by personalities Seamus Heaney and Sinead O’Connor and one by Yeats himself. The words being spoken were projected onto a screen along with relevant images. It was very well done, I thought. 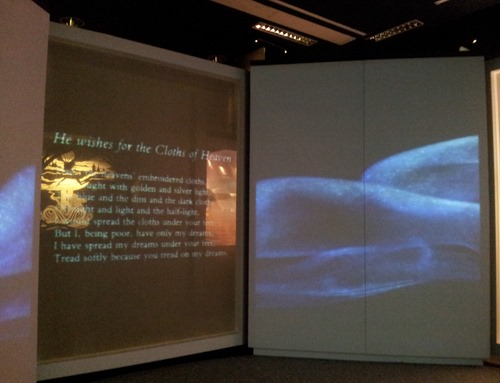 I’ll finish with one of his poems which was featured in this display, a favourite of mine.

He Wishes For The Cloths Of Heaven

Had I the heavens’ embroidered cloths,
Enwrought with golden and silver light,
The blue and the dim and the dark cloths
Of night and light and the half-light,
I would spread the cloths under your feet:
But I, being poor, have only my dreams;
I have spread my dreams under your feet;
Tread softly because you tread on my dreams.