We drove up to Kendal last Saturday, the main reason being to visit  The Radev Collection: Bloomsbury & Beyond, the latest exhibition at the Abbot Hall gallery before it finishes at the end of this month.

The exhibition comprised a selection of paintings and other works from the Radev collection – a collection of 20th Century works accumulated over a number of years by three gay men who were associated with the Bloomsbury group.  From the Gallery’s website:

The Radev Collection is named after Mattei Radev, who came to Britain in the 1950’s as a stowaway on a cargo ship, fleeing from communism in his native Bulgaria. Radev went on to build a new life in London mixing in the artistic Bloomsbury circle and becoming a leading picture framer for the London Galleries.

Radev inherited most of the works from his friend the artist-dealer Eardley Knollys who had in turn inherited from music critic 5th Lord Sackville, Eddy Sackville-West following the latter’s’ death in 1965.

Abbot Hall is the last call for the exhibition which has already been shown in Chichester, Lincoln, Bath and Falmouth.

Quite a number of the works were by artists, many of them British, that I hadn’t come across before. But there were some were some works by more well known artists including prints by Picasso and Braque and paintings by Lucian Pissarro,  Graham Sutherland, John Piper, Ben and. Winifred Nicholson, Vanessa Bell and Duncan Grant.  Although there were no “great” masterpieces, the standard of works on display was very high.  And it is always good to be introduced to artists I’ve not come across before.

These are a few of the works I particularly liked.

This abstract painting by the Russian Expressionist painter Alexej von Jawlensky, who worked in Germany and was a member of the Blue Rider group, was displayed in the first of the three rooms immediatly facing the door, so it was hard to miss. I’ve been reading up on German Expressionism lately so found it particularly interesting.

There were a couple of paintings by Winifred Nicholson. This simple, subdued painting of flowers on a window sill was my favourite.

And there were a couple of paintings by the French painter Maurice Denis. He was, apparently, very religious and this is often reflected in his subject matter as in this painting.

There was an original of the little dancer bronze by Henri Gaudier-Brezska, a copy of which we saw at Kettle’s Yard when we visited Cambridge in January 2012. It’s a lovely little work, beautifully posed. It was really nicely displayed- spot lit so it casted shadows behind it onto the walls – very effective. No photos allowed at Abbot Hall, but here’s a picture I took of the Little Dancer when we visited Kettle’s Yard. 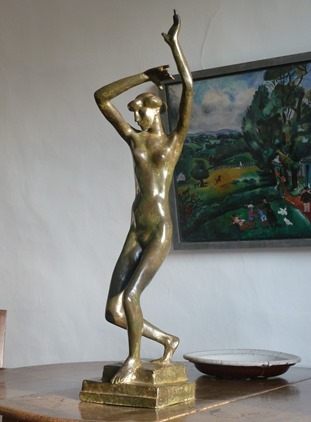 The “discovery of the day” was an English painter  I’d not come across before, Adrian Ryan. There were a number of works by him on display, a couple of landscapes and a still life. The two landscapes, with their bright colours and swirly brushstrokes, very much reminded me of works by Van Gogh.

All the works from the collection can be viewed on the website on a dedicated website here.

The title of the exhibition emphasised the connection of the three collectors with the so called “Bloomsbury set” of artists, writers and the like. But there isn’t a Bloomsbury style or school of art as such. The collection is simply representative of the type of art being produced in Britain and a few other countries at the time and that would have been popular with the type of people associated with the loose grouping of intellectuals. So a marketing ploy rather than a description of an artistic movement. But a good selection of works, nevertheless. And definitely worth the drive up the M6.

1 thought on “The Radev Collection at Abbot Hall”