While visiting the Art Turning Left exhibition at the Tate in Liverpool last week, I was particularly taken by a small number of simple wood cut prints with a political message by the German artist Gerd Arntz. I’d never heard of him before, but, curious, I decided to try to find out more.

Although he was born into a wealthy family, he became a committed socialist. Moving to Dusseldorf in 1919, and the year after he joined the Cologne Progressives, a group of Communist artists based in Cologne and Düsseldorf. He was a “council communist” who advocated the formation of worker’s councils, like the Soviets that preceded the Russian Revolution of 1917, to replace the existing state apparatus.

He created woodcuts for the ‘Allgemeine Arbeiter Union’ (General Labor Union) as well as the Communist ‘Intenationale Arbeiter Hilfe’.

In 1925, he took over Otto Dix’s studio in the city. Throughout his life, he specialised in producing woodcuts and linoleum cuts, criticising social inequality, exploitation and war – a technique that allowed reproduction and widespread dissemination of images for propaganda purposes.

His prints were exhibited, sold to sympathetic art lovers, and published in left wing magazines.There’s a good selection of his images here.

In 1926 he was recruited by Otto Neurath to design pictograms and further develop ISOTYPE – the International System of Typographic Picture Education –at that time, a revolutionary approach to communicating complex information using symbols.  From the beginning of 1929 Arntz worked at the Gesellschafts- und Wirtschaftsmuseum (Social and Economic Museum) directed by Neurath in Vienna, and designed around 4000 pictograms which could be used to symbolise key data from industry, demographics, politics and economy, transcending language barriers.

In 1930 they produced the Atlas Gesellschaft und Wirtschaft a statistical atlas on society and the economy with charts and diagrams using the pictograms.

"Numbers of motor vehicles in the world" (USA and rest of the world).

A selection of around 600 of Arntz’s pictograms are available on-line at the Gerd Arntz web archive website. Here are a few examples. 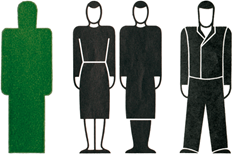 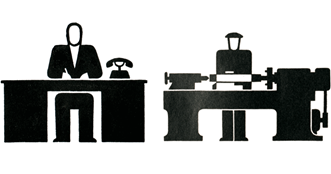 Today these symbols and pictograms have a very familiar look. Just check out your clip art collection or look at the icons used on your phone, tablet and computer. Similar symbols are used in all sorts of applications, including representations of statistical data. But in the 1930’s they were revolutionary, from both an artistic and political perspective.

In 1934, Arntz fleeing the fascist regime in Austria, emigrated to The Hague, and in 1934, he published a series of prints warning against the danger of Nazism. In 1943, after the German invasion of the Netherlands, as a German citizen Arntz was conscripted into German military service, but deserted to the French Resistance in 1944. After the war he moved back to the Hague and continued to work as a graphic designer. He also remained a committed socialist to the end of his life in 1980.