I finally made it to Kilmainham Gaol in Dublin on Sunday. It’s one of the most popular tourist attractions in Dublin, yet despite numerous visits to the city over the past ten years, I’ve never managed to get to it before, even though I stayed in a hotel directly opposite during my last visit just a few weeks ago. So I decided that while I was coming back over on business again (my last trip this year) I’d catch the early boat so I could take a look.

It was a calm crossing and the boat actually docked a little early. I drove over to Kilmainham to visit the gaol, parking up at the IMMA car park and then walked over to the other side of the park to the gaol. It is amazing how much the trees had changed during the three weeks I’ve been away. The leaves were all golden and looked very pretty. But they won’t be on the trees much longer.

There was a sizeable queue at the gaol but I only had to wait half an hour before my guided tour and was able to spend that time looking round their small museum display.

When Kilmainham Gaol opened in 1796, it was one of the most modern prisons in Ireland, replacing an older gaol a short distance away. It’s popularity as a visitor attraction stems mainly from it’s use to detain political prisoners associated with the struggle for Irish independence over the centuries, including United Irishmen, Fenians, the leaders of the 1916 Easter Rising, and Republicans held there during the Irish Civil War (including Eamon de Valera, who eventually became President of the Irish Republic)  and that was the main focus of the guided tour. It could have been a real "guilt trip" if my sympathies hadn’t been with the rebels!

Yet political prisoners were only a very small part of the gaol’s story. It was mainly used for more ordinary "criminals" (many people were imprisoned for stealing food during the famine) and as a holding station for thousands of people waiting to be transported to Australia. In the early years, debtors comprised over half the prison population. Others were detained for begging,
stealing, assault, prostitution and drunkenness.

The rectangular west wing is the original prison building and comprises three floors of small, dark, and very cramped cells. There was no glass in the windows – the wind blowing through them was meant to keep the building ventilated. There was no segregation of prisoners; men, women and children were incarcerated up to 5 in each cell, with only a single candle for light and heat. 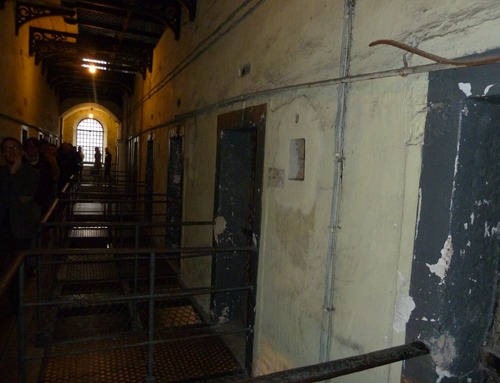 The east wing, which opened in 1862, provided an extra 96 cells . According to the Visitor’s Guide leaflet, that can be downloaded from the Heritage Ireland Website (but didn’t seem to be available at the gaol itself, so if you’re planning to visit it’s advisable to download one from here beforehand)

It is typical of the Victorian belief that prison architecture was crucial to the reform of inmates. During this period the gaol was run on the principles of silence and separation. Communication between prisoners was forbidden and they spent much of the time
alone in their cells. The prison authorities hoped that they would use this time to read the Bible, contemplate and repent their crimes.

The east wing looked familiar. Not surprising as it was used in the original version of The Italian Job.

It was much brighter than the dark and dingy west wing.

On the floor of the east wing there was a work by an Australian artist, Christina Henri – Roses from the Heart. It’s a memorial to all the British and Irish women transported to Australia between 1788 and 1853. The work is made up of 25,566 cloth bonnets (taken from an 1860s servants bonnet) each embroidered with a woman’s name and details of the ship on which she was transported.

The most moving part of the tour was the visit to the Stone Breakers Yard where the leaders of the 1916 were executed between 3 and 12 May. 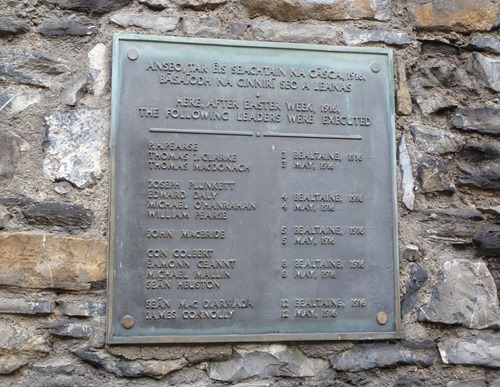 Most of the men had been held in the gaol prior to their execution. The last to be shot was James Connolly who was badly injured during the uprising and was brought from Dublin Castle, where he was being held, and faced the firing squad tied to a chair to keep him upright.

The cross marks where the executions took place. 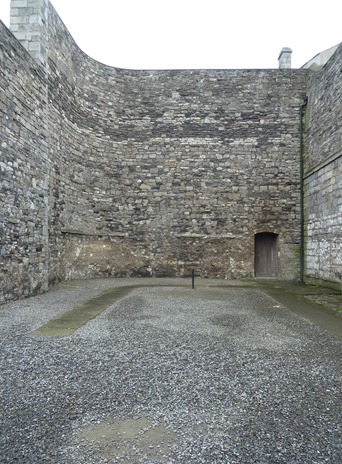 The Gaol was finally closed in 1924 by the government of the new Irish Free State.

The guided tour lasted an hour but it felt a bit of a rush, little time to look at most of the areas we visited properly or to take photos. I felt like part of a herd of cattle at times. The gaol is a victim of its own success. But I’m glad I made the effort to see a place where ordinary people fwere incarcerated due to nothing else but their poverty and where some important events in Irish history took place