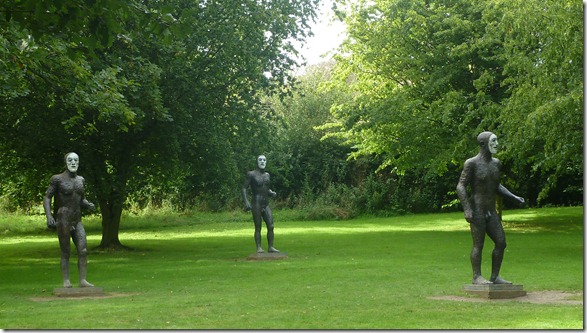 These three figures, cast in bronze, are the “Riace Warriors” by Elisabeth Frink, comprise one of my favourite works on display in the Yorkshire Sculpture Park. Along with Barbara Hepworth’s “Family of Man”,  they’re something I always make a point of going to see every time I visit the park. 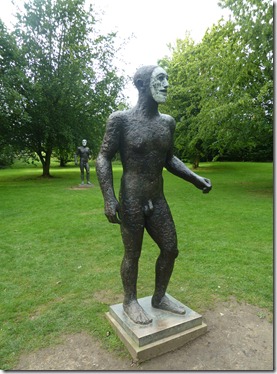 Each of he figures stands about two metres or so high, so they’re a little taller than life size. They stand menacingly amongst the trees and can look rather intimidating as you approach them from a distance, which is what I’m sure the artist intended. I’ve never been able to take a photograph that really conveys this.

inspired by the ancient Greek warrior statues discovered off the coast of Riace, Italy, in 1972. Frink felt that ‘the original figures were very beautiful, but also very sinister… these were warriors who would go out and fight your battles for you, mercenaries… in other words they were thugs’.
The painted faces on these and Sitting Man II are inspired by Frink’s interest in Aboriginal art that developed after a visit to Australia. She uses the idea of a mask as ‘a way of showing that their beauty in a sense hides what they are up to’.