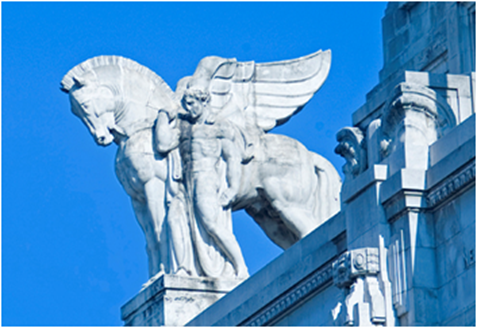 A few weeks ago BBC 4 were running a short series on “A history of art in three colours”. The colours in question being gold, blue and white. The series was a bit of a Curate’s egg – “good in parts”. But one thing that particularly struck me was in the third programme on white, when the presenter discussed how the Classical Greek and Roman era statues that we are so familiar with which are so brilliantly white, didn’t look at all like that when they were created. They used to be painted in bright colours. Over time, the pigments have faded, weathered and disappeared, but, in the past, the museums have also deliberately removed remaining traces of colour due to their misguided belief that Classical sculpture should be “pure” and, therefore, white.

Just a few weeks after watching the programme, I visited the Ny Carlsberg Glyptotek in Copenhagen where they have an exceptional large collection of statues and other artefacts from the Classical period. On some of the statues exhibits in the museum traces of colour were clearly visible.

Researchers based at the museum have been undertaking research on the use of colour on Classical statues and there were a number of exhibits about the project.

The objects are initially examined visually using techniques such as macroscopy, technical photography and microscopy. Analysis of traces of pigments detected may be carried out in-situ using non-invasive methods such as X-Ray Fluorescence spectrometry (XRF). In some cases small samples may be removed for chemical analysis using a variety of techniques. The researchers then attempt to determine what pigments had been used and work out how the objects would have looked when they were created.

A number of examples of how some of the objects that have been researched may have looked were being shown in the museum.

Further information on the project is available on the museum website here and also on the project’s own website. I also found this article about the subject of investigating the colour of classical sculptures that had originally appeared in the Smithsonian Magazine.

To our modern eyes, the colours are surprisingly garish. We expect the statues to look white because that’s how they’ve always been presented to us.

But the practice didn’t end with the demise of the Classical civilisations. The great medieval stone works were also painted. The statues and decorative carvings in the great medieval cathedrals, the intricately carved capitals, the columns and even the exterior facades were adorned with bright colours. Wells Cathedral was a notable example and as it says on their website

in the Middle Ages the stone was painted inside and outside and the West Front would have appeared like a gigantic picture book.

You can even paint it yourself here.