Nîmes is blessed with a number of museums and art galleries, including one devoted to contemporary art. It’s located in the Carré d’Art – the modern building designed by Norman Foster that’s opposite the town’s Roman temple. the Maison Carré.

My time in Nîmes was limited, but I managed spend an hour before I caught the bus to the Pont du Gard looking at the works on display from the gallery’s permanent collection. They have a good collection on display in a serious of light, spacious rooms on the first floor of the building. It’s not massive so an hour was enough to have a good look round. The following are some of the works I particularly liked

Bleu d’aout (1961) by Jacques Villeglé is a collage made from torn posters – with one poster pasted over another is torn so that part of the one underneath is revealed. It’s a technique for which this Breton artist is well known 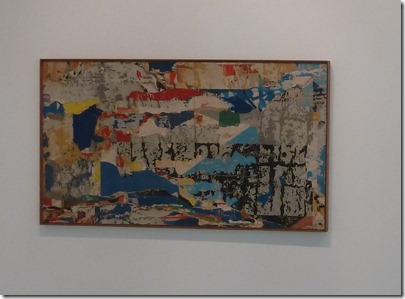 Next to it was another collage made from poster, La Rouille de la Tour Eiffel (1967-71), by François Dufrêne (1930-1982), who actually started out as a poet before turning to visual art. 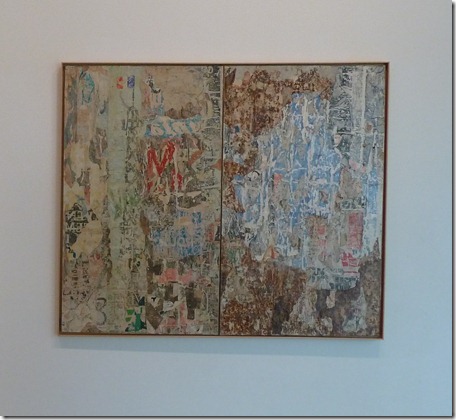 Villeglé and Dufrêne, together with another artist, Raymond Hains, specialised in creating collages from posters and were known as the “Affichistes”. There’s an article about them, in French, here. Their work can be described as Décollage –

the opposite of collage; instead of an image being built up of all or parts of existing images, it is created by cutting, tearing away or otherwise removing, pieces of an original image.

This painting lapis lazuli II (1994) by the German artist Sigmar Polke is painted using only one pigment – the semi precious stone of the title.

The swirl of monochrome colour reminded me of a stormy sea or the patterns produced by a crystal of copper sulphate dissolving in a beaker of warm warm water where the colour is carried through the liquid by the convection currents.

I believe that this painting was one of about 20 that the artist created especially for an exhibition of his work held in Nîmes in 1994. So perhaps it is meant to represent the indigo dye used to colour “cloth de Nîmes” (better known as denim) swirling in the dying vat.

This painting by Simon Hantai, Sans titre (1967), has also been created using one colour. 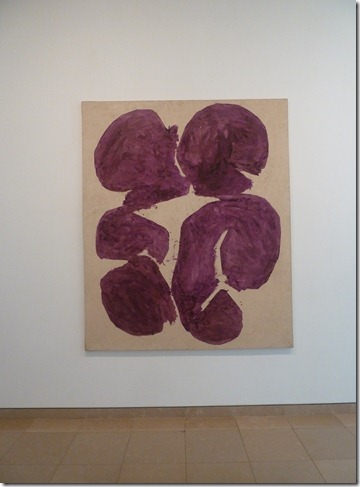 Abstract paintings created using a single colour were definitely a theme in the gallery. Here’s another one,  Romi (1993) by by Bernard Frize.

Although it’s an abstract work it reminded me of a Chinese landscape painting and looking at it the shapes reminded me of hills, rivers, lakes and villages.

The gallery were also showing some works by Gerhard Richter, including this large scale abstract canvas Abstraktes Bild, (1989). It rather reminded me of a late period Monet.

In a darkened room in the corner of the gallery there was an installation where lights shone on  various objects that were being rotated, producing moving shadows on the wall. Shadow Installation (2005) by Hans Peter Feldmann. It was probably my favourite work in the gallery. The picture really doesn’t do it justice.

The following Youtube video of another of his works gives a feel for how it looked.

The Carré d’Art have built up a good collection of contemporary, which shows you what can be achieved by a Local Authority with a little imagination and a lot of determination. And its brave too, as it’s all too easy to go for the lowest common denominator and buy populist pictures. I didn’t like everything on display, and why should I? But I did discover some artists that I can explore further in the future.

The gallery also hold temporary exhibitions on the second floor. These have featured some major contemporary artists in the past. The current exhibition consists of works by the German artist Vera Lutter, who now lives in America. She takes photographs using a giant pin hole camera, printing off large scale negative images. There’s an entrance fee for the temporary exhibitions and given my time constraints I wasn’t able to have a proper look around. I did manage to get a quick peek at some of the pictures .