Last Saturday I caught the TGV from Nîmes to Montpellier to go and watch Wigan play the Catalans Dragons at the Stade de la Mosson. Although the Catalans are based in Perpignan, which is about 100 miles further west close to the Spanish border, they take some of their home games “on the road” to try get some more publicity for Rugby League in the South of France and “spread the word”. 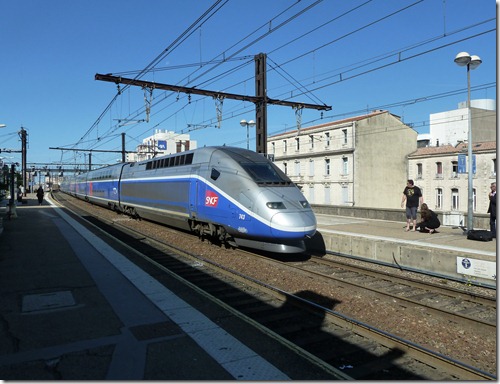 and just over 20 minutes later, after a very smooth, comfortable ride, I was in Montpellier.

I had a few hours to look round before making my way to la Place de la Comédie, the main focal point of the city, where the fans from both sides were gathering ready to catch the tram over to Stade de la Mosson which is on the outskirts of the city. 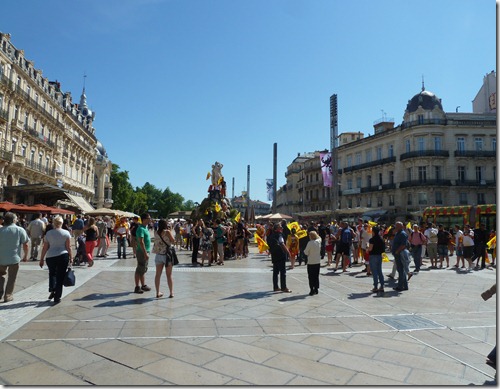 Rugby League is a family sport and crowd trouble is very rare (although not completely unknown). So there was no segregation at the stadium and the fans mingled freely both before and after the game.

Although Perpignan is in France, the locals generally consider themselves to be Catalans first and are very proud of this. Here’s the Catalans flag being displayed on the pitch before the match. 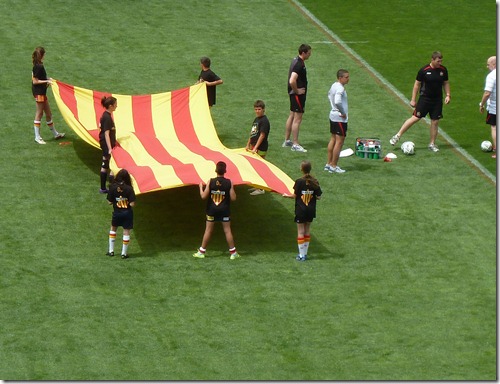 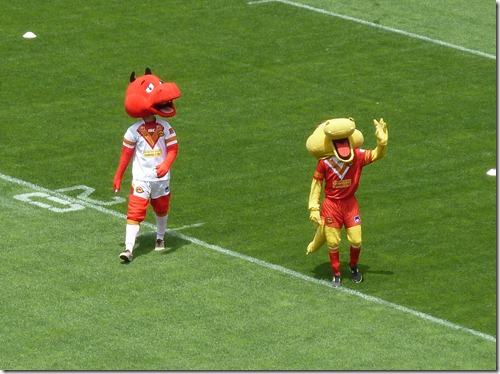 Wigan fans in the stands ready for the match to start.

The match was perhaps a little closer than the score suggests. Catalans bombed a couple of good chances- but Wigan were definitely the better team on the day, playing some good, flowing rugby and scoring some excellent tries, two of them when they were down to 12 men when Gil Dudson was in the sin bin for 10 minutes.

Even though they’d lost, the Catalan fans were gracious in defeat and were very friendly. A number of them came over and shook my hand congratulating me for my team’s win.

They always organise a party after the game . There was a band and fans of both sides were mingling and dancing. 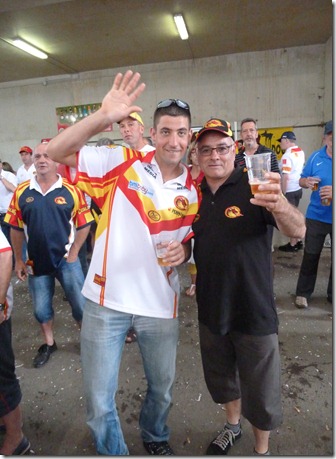 Waiting for the tram back to the city centre. 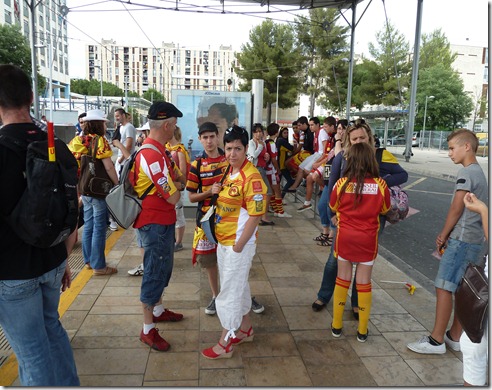 On the tram I got talking to a Catalans fan from Perpignan. We managed to communicate to some extent, talking about the game and the state of Rugby League, despite his limited English and my poor spoken French. About 25 years ago I took an A level in French at night school and got reasonably good. But the saying “if you don’t use it you lose it” is definitely true with respect to languages. Although I can still make a good stab at reading French, I struggle with  conversation, which is a more difficult skill. But we managed to make each other undertood, I think, at least to some extent!

When I got back to the city centre I stopped for a café crème  in a café in the market square to perk me up before I headed down to the station to catch my train back to Nîmes. 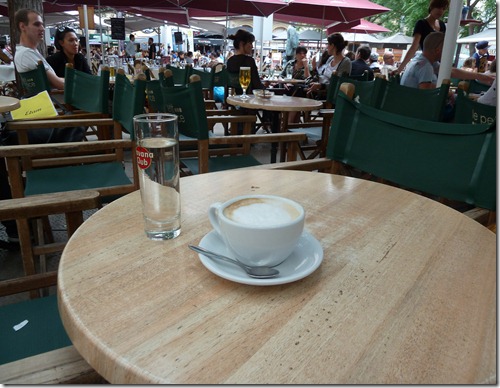