Monet in his garden at Giverney – Picture source: Wikipedia

The Tate recently announced that the summer exhibition at the Liverpool gallery will be devoted to three artists – J M W Turner, Claude Monet and Cy Twombley*.  According to their press release the exhibition:

“will examine the art historical links and affinities between three artists who were all considered radical painters in their time, suggesting common characteristics and motivations underlying their late style. The exhibition will explore their shared fascination with light, landscape, the sublime and mythology as well as the painterly qualities of their work, whether as makers of figurative or abstract images.  Displaying over sixty works, the exhibition will treat each artist in considerable depth, with rooms juxtaposing the works of two, or all three, of the artists.”

One of the main attractions will be five of Monet’ paintings of waterlilies (Nymphéas), two of which have never been shown in Britain before.

There are over 250 of Monet’s waterlily paintings displayed in galleries around the world, including the Musée Marmottan and the Musée de l’Orangerie in Paris. We visited both during a family holiday in the city a few years ago.

The Impressionists were the first group of artists to turn away from attempting to produce photographic like paintings. Instead they tried to capture the overall visual effect (i.e. impressions) rather than concentrating on detail. They used broad brush strokes to apply blocks of colour which mixed “optically” (i.e. when viewed) rather than blend them on the canvas. Monet’s later works, especially the Nymphéas, pushed this technique towards it’s limits. As my son remarked – close up the pictures look a mess but you can see what he’s painted when you stand back.

The Musée Marmottan is one of our favourite galleries in Paris and we’ve visited it a few times. It’s much smaller than the massive Musée d’Orsay (a visit there is exhausting – there’s too much to see in a day) but has an excellent collection of Impressionist paintings featuring a number of major works by Monet, including several waterlilies and “Impression Sunrise” (Impression, soleil levant) the painting after which the Impressionist school was named. It also has an excellent collection of paintings by Berthe Morisot. It’s slightly off the beaten track in a well to do part of Paris not far from the Bois de Boulogne but well worth the ride out on the Metro. We find that it takes a couple of hours to look through the collection and there are not so many that you become overwhelmed meaning that you can spend time studying and contemplating the paintings. 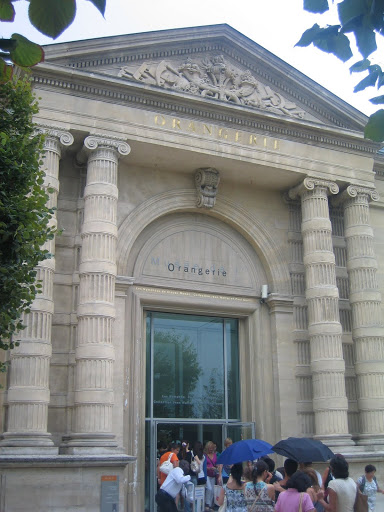 The  Orangerie is at the Pace de la Concorde end of the Jardin des Tuileries. The lower gallery displays pictures from the Collection Jean Walter et Paul Guillaume which includes works by Derain, Cezanne, Renoir, Picasso, Modigliani, Matisse and Marie Laurencin. But the main reason most people visit the museum is to see the collection of Monet’s Nymphéas displayed in two specially built galleries on the ground floor. There are 8 large murals which were donated to the nation by Monet after the First World War. The setting is magnificent. The galleries are oval and lit by natural light from large skylights in the ceiling which really brings out the colours. 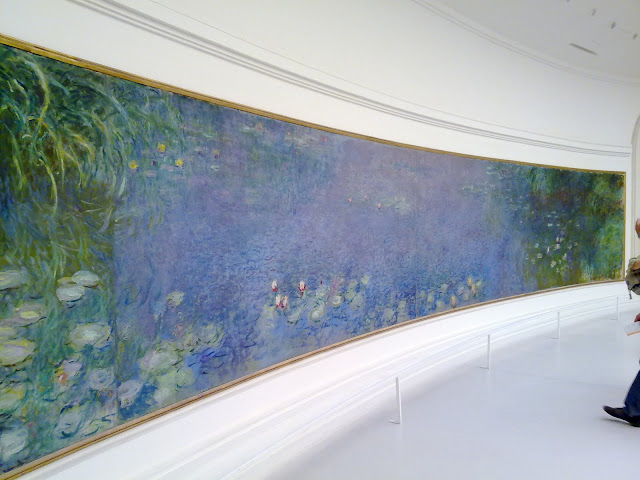 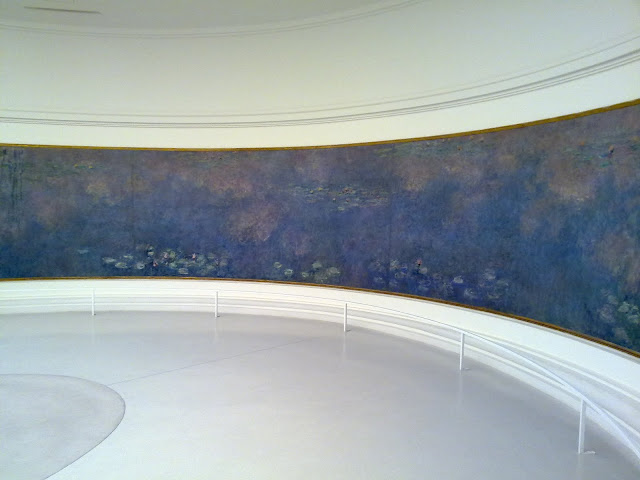 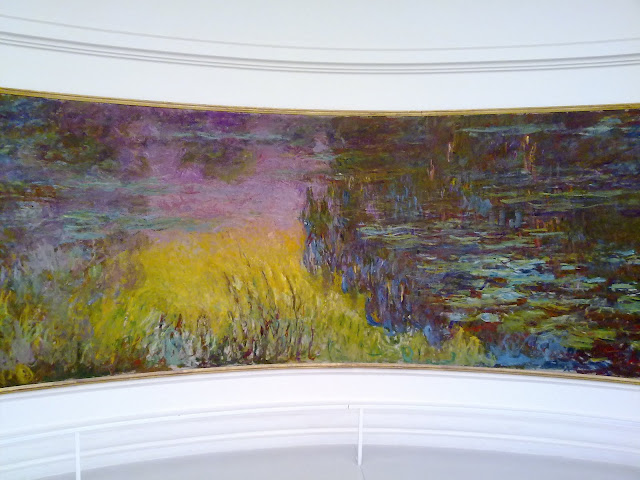 * Turner Monet Twombly: Later Paintings will be on show at the Tate Liverpool from 22 June to 28 October 2012. The exhibition is organised by Moderna Museet, Stockholm, where it will be displayed until 15 January 2012, in collaboration with Tate Liverpool and Staatsgalerie Stuttgart (11 February – 28 May 2012).

2 thoughts on “Les Nymphéas at the Musée de l’Orangerie”