While I was in Helsinki last week, I was able to continue my exploration of the Jugendstil style while getting something to eat by taking my lunch break in the Aschan Café Jugend, which is next door to the Tourist office just off the main Market Square on the South Harbour. From the outside, it doesn’t look particularly special, but the inside it’s decorated in the Jugend style.

The building was opened in 1904 as a banking hall. It was converted to a café  just a few years ago. I believe that it is owned by the Tourist office and there’s a door between the two. The café also includes  a take-away delicatessen and a shop selling Finnish delicacies. Although there’s plenty of room inside there’s also a few tables outside on the pavement for customers who want a quick snack, although it would be a bit cold for a good part of the year!

Most of the guidebooks suggest that Finland is an expensive place to eat out. I have to say that wasn’t my experience during my short visit. It was certainly no more expensive than the UK and probably cheaper than Ireland. The Café Jugen had various sandwiches and cakes and light meals, including salads, which I thought were very reasonably priced. It had quite an informal, relaxing atmosphere and was a good place to stop for a light midday meal.  The main attraction, though, was the decor. 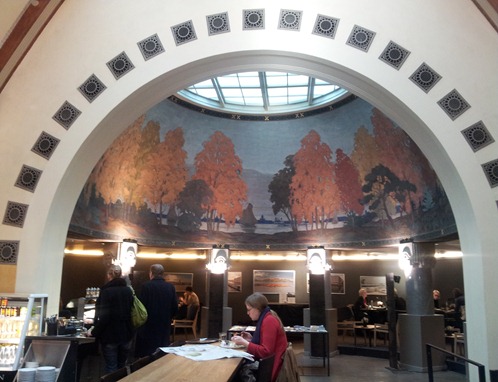 and under the arches 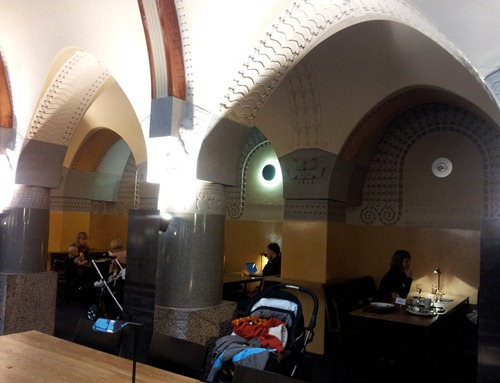 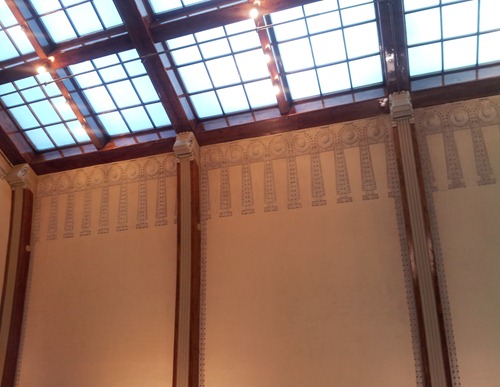 There’s some more information on the café and pictures when it’s empty, here, and a nice blog post with some more pictures and background information here.