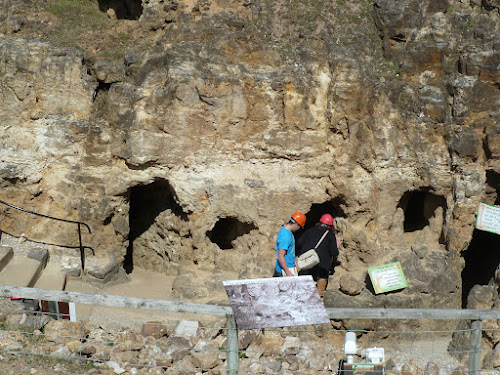 During a trip to Llandudno last week we took the tramway up the Great Orme. Just a short walk from the Halfway tramway station there is a large hole in the ground which is the entry to a prehistoric copper mine.

The entry to the site appeared to be a former pub. We bought our tickets at what seemed to be the bar. We then went through to a room where we watched a couple of short films – one a news item featuring the mine from News at Ten and the second from a Channel Four programme. Afterwards we picked up a safety helmet and went down to the mine entrance accessing the underground tunnels via a narrow entry in the rock face.

Visitors get to explore two levels of underground passageways hewn out by the Bronze Age miners using stones and primitive tools fashioned from animal bone. Unlike in a modern mine, the miners followed the seams, extracting the ore as they went along. This left irregular, winding passages of varying height and depth and it some became obvious why visitors needed to be issued with safety helmets. Fire was also used to soften the rock and make it easier to extract the ore. Some of the tunnels are so small they could only have been worked by children. But at one point there was a massive crater – so large that it was hard to believe that it had been excavated by hand using basic tools. This was at a point where several seams came together and where the rock was very rich in ore. 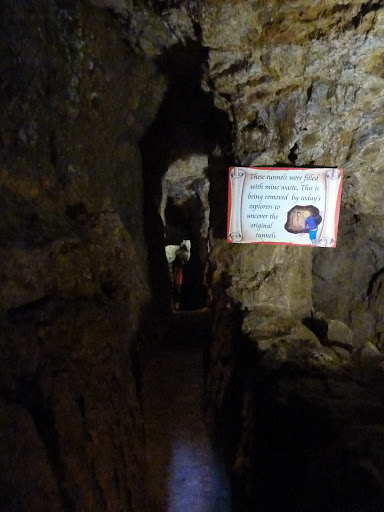 The mine was a massive undertaking. It’s reckoned that about 1800 tonnes of copper were extracted, considerably more than would have been needed for local needs, so there would clearly have been traded, probably across Europe, access to the sea being very close There must have been a relatively sophisticated social structure to organise the work and trade.After emerging from underground the tour took us along a path to look at the opencast pit that was the fist part of the mine to be exploited. The ore would have been discovered here, near the surface. After it had been extracted the miners would have started to follow the seams deeper underground

It was a fascinating visit. There are 7 more levels (so nine in all) and other passages that haven’t been excavated yet. There is continuing archeological excavations and studies at the site and probably plenty more discoveries to be made.